I would say that anybody who employed Rick “Hot Breasts” Shaftan before this happened is in the clear. I presume strategist/pollster Shaftan is good at his job, and I get why people hire him. He’s no dummy. But I have to wonder at a Democrat’s loyalty to Shaftan right now. What message is Nick Sacco sending to the women he represents? The gay people? The Democrat on Wednesday’s ballot?

via The Jersey Journal:

What a relief. Here I was worried that the mighty righty Rovian captain would be hurting for jingle. But fear not. The brains behind Shutdown Steve Lonegan is the brains behind the Democratic song stylings of Nick Sacco. Look at the choice of words Sacco spokesman Phil Swibinski uses to defend Shaftan’s behavior:

“He [Sacco] wishes that Rick had never made those comments. “They don’t sound like him … I’ve never known Rick to judge anybody based on their sexuality.”

Really. Let me clue you in: The Lonegan campaign has been one long series of clever innuendo implying that Cory Booker is gay, and that there’s something wrong with that. 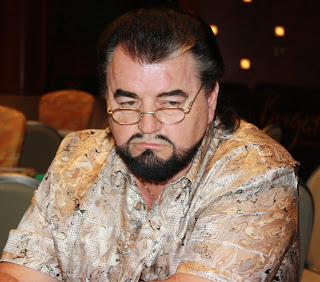 It's ugly, really ugly. James Wiley, the public works director for North Bergen who resigned earlier this month, plead guilty today to forcing public workers to do work around his house and submitting fraudulent time records. He also had his employees engage in political campaign activities while getting overtime from the town.

This kind of spit really stinks, as it paints both Democrats and public employees in a bad light. We don't need this right now, while we are fighting for both public worker rights and the Democratic brand. It plays into everything the other side says about us, and any Democrat who doesn't decry this and other corruption on our side is making a huge mistake.

The new Senate committee lineups are taking shape and I just got my hands on the list of committee chairmen/women. Some seem like a natural fit (Vitale, Scutari for ex.) while other appear wildly out of place given their backgrounds and leadership skills. But that’s just my take.

Anyway, follow me below the fold to learn who the Senate’s gavel-bearers will be for the next 2 years.

I wanna be from North Bergen, (Son)

Never mind that I don’t live in North Bergen. Or that Mayor Nick Sacco is a double-dipping sack of DINO. All i know is that I’ve never wanted to vote for someone so badly in my entire life.

Where they stand on the budget deal

As news continues to come out about the budget deal that has been reached, the question of where the votes will come from to pass it becomes even more important. Some of the initial reaction hasn’t been terribly favorable. Senator Sacco won’t be a supporter because of UEZ funds:

Sacco said North Bergen has raised UEZ funds his city has used to build a mall on a formerly blighted area, to fix roads and to create a turn lane on routes 1 and 9.

“I don’t know how to get a reversal,” Sacco said. “This is a major disappointment. I absolutely cannot support this budget.”

Senator Van Drew kept it vague with this answer when asked whether he would be voting in favor of the budget:

“I’ll say this,” Van Drew told PolitickerNJ.com as he left the Statehouse yesterday, “I want to do anything I can to move the process forward.”

Senator Cunningham was leaning against voting for the budget when asked, but isn’t sure:

“I haven’t really decided yet,” Cunningham told PolitickerNJ.com. “I’m trying to figure that out.”

And Senator Whelen said he cannot support the budget as constituted:

“It’s unlikely I’ll vote for it as it’s currently devised,” Whelan told PolitickerNJ.com. “Whether there can be enough tweaks to get me there, it remains to be seen.”

We’ve also told you about the opposition from conservatives to the budget deal and Assemblywoman McHose echoed those sentiments calling the Governor out saying the Emperor has no clothes:

We did not run on the kind of deep cuts in property tax relief to suburban and rural communities that we see in the final budget bill.

If all Republicans in both bodies support the budget, they need 4 Democrats in the Senate and 8 in the Assembly to get things to the Governor’s desk. If you’ve seen comments from your members of the Legislature, let us know in the thread. And if they’re not on the record yet, give them a call. Here is a list of Legislators and their contact information.

From Wally at PNJ:

Sources say that State Sen./Union City Mayor Brian Stack will announce next week that he has endorsed the re-election of Gov. Jon Corzine.  Stack, who had openly flirted with the prospect of backing Republican Christopher Christie, committed his support of Corzine during a meeting of the Hudson County Democratic Organization today.

And we don’t need sources on who he would like to see as the Senate President:

“I am confident in Senator Sweeney’s ability to lead the Senate, as we prepare to address matters that are critical to the residents of New Jersey,” Stack said in a statement.

“Senator Sweeney has demonstrated both strong leadership and sound judgment during his tenure as Democratic Majority Leader, and I am certain that he will make an outstanding Senate President as he continues to fight for the families of our State. His prominent record as a labor leader conveys his understanding of the needs of New Jerseyans at a time when it is particularly important for working families to have their interests represented in the Statehouse.”

Here’s another case of the race for Governor crossing paths with the pending Senate contest. Meanwhile, Senator Codey picked up a public supporter as well this week with Senator Nick Sacco.