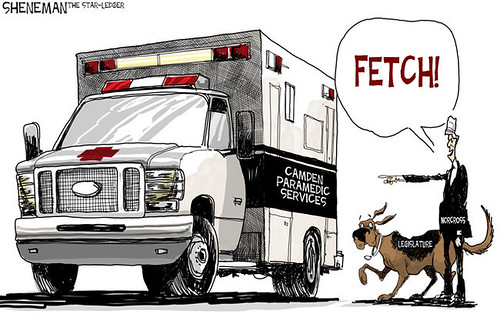 NJBiz named Rutgers General Counsel John Farmer as one of New Jersey’s Top General Counsels yesterday. The former NJ Attorney General who has only held the Rutgers post since April of 2013, was named for his skill in handling the Mike Rice basketball scandal while simultaneously helping to conclude the Rutgers/UMDNJ merger (the largest ever in Higher Education), issuing over $1 billion dollars in new bonds as part of that merger, and helping to ward off last year’s attempt by Senate President Sweeney to unilaterally eliminate the Rutgers Board of Trustees.

Farmer has a history of public service at the highest levels having served as General Counsel to the 9/11 Commission under former Governor Thomas Kean, Chief Counsel under Governor Whitman and as New Jersey Attorney General. Farmer has a strong and clear vision of New Jersey history, and of New Jersey as a coherent whole, not as a collection of warring political fiefdoms dominated by local chiefs, which he strongly argued in his 2012 column defending Rutgers from takeover by Glassboro State College Rowan University and their South Jersey benefactors.   As keepitreal noted in my dairy on taking Rutgers private this week, Rutgers has a lot of legal firepower on their side.

If there’s one thing I’ve learned after beginning to pay attention to New Jersey politics, it’s that South Jersey is neglected. If there’s a second thing, it’s that the University of Medicine and Dentistry of New Jersey (UMDNJ) is a scandal.  So you won’t be surprised that I gladly welcome yesterday’s announcement that there will be a new medical school in South Jersey:

Rowan University and Cooper University Hospital announced today that they are partnering in the formation of a new, four-year allopathic medical school in Camden, NJ which will be known as Cooper Medical School of Rowan University.

Yes, the latest thing I’ve learned is that allopathic means conventional medicene. I believe the story was broken by the Courier-Post. In any case, the new school in Camden is made possible by an executive order by Governor Corzine, which will go into force unless rejected within 60 days by the legislature:

The new medical school will be the first four year allopathic medical school in South Jersey.  Currently, Cooper provides clinical training to third and fourth year medical students from University of Medicine and Dentistry of New Jersey (UMDNJ)/Robert Wood Johnson Medical School. Independent studies by both Cooper and UMDNJ concluded that there is a significant need for a four year medical school in South Jersey, and that Cooper and its medical faculty are well prepared to meet that need.  “We are appreciative of our 30 year relationship with UMDNJ. This affiliation has positioned Cooper for the endeavor announced today,” added John P. Sheridan, Jr., President and CEO of Cooper.

The newly-established Cooper Medical School of Rowan University will be financed by existing annual allocations to the Camden Campus and will not require any additional taxpayer dollars.

The goal is to have the first class begin in September 2012. One long-term benefit will be that a stronger academic hospital will be able to compete with Philadelphia, helping keep the $2 billion that presently goes over the river.  More importantly, this will address the shortage of New Jersey doctors — remember, the baby boomers will be retiring soon.  The Association of American Medical Colleges (AAMC) has been working to increase the number of medical school slots.

There’s some grumbling from Essex County politicians that UMDNJ is losing turf, but they can only complain about feeling disrespected, not the merits of the plan:

Both Rice and a UMDNJ spokesman, however, acknowledged Rowan was in a better position than UMDNJ to finance the new medical school venture because of its healthier bonding capacity. Rowan plans to issue $100 million in bonds for the new school.

I don’t know what will happen in the fall election, but this move by Governor Corzine will benefit New Jersey for the rest of this century.