While Congress takes (yet another) two-week recess from debating the most sweeping changes to immigration policy in two decades, protesters nationwide called on legislators to pass what they describe as humane immigration reform. 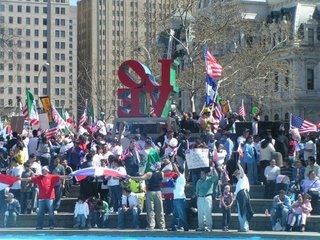 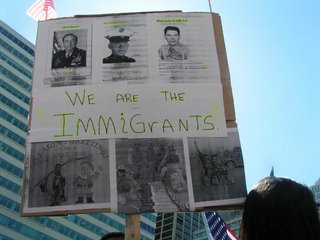 You can’t have a carnival without a geek, so it’s no surprise that yesterday’s immigration reform rally in Liberty State Park was visited by one of New Jersey’s most vicious and pathetic hatemongers, Hal Turner.

“Visited” isn’t the right word: Turner hired a small plane to circle the park, towing a banner that read: NO AMNESTY — BEANERS GO HOME, with his Web address at the end. “Beaner” being his word for Latinos, I guess. Considering the slurs he routinely launches against blacks, Jews and gays on his shortwave radio show, “beaner” is comparatively mild.

Turner spends his time ranting about “savage Negro beasts,” “bull dykes” and “faggots” from his perch on WBCQ, a shortwave radio network based in Maine. As these profiles from David Neiwert and the Southern Poverty Law Center show, Turner first slithered into view as a supporter of radio bigot Bob Grant, organizing rallies on Grant’s behalf when the old creep was bounced off WABC in 1994 for using racial slurs on the air. Sean Hannity, who succeeded Grant on WABC, made Turner a fixture on his program, always ready to open up the phone lines for “Hal from North Bergen” and giving him air time for such witticisms as “If it weren’t for the white man, blacks would still be swinging from tree” and “the problem with police brutality is that police don’t use it often enough.”

(I’d like to know what company accepted money from Turner to display that banner. I’d love for some enterprising reporter to track him down and ask him why he let his plane be used to display a racist epithet. Maybe if there’s ever an outdoor ceremony honoring Holocaust survivors, this joker could fly around it with a swastika banner trailing behind.)

Ugly Campaign Literature on the Right

It was bound to happen here sooner or later. This afternoon Vince Micco put out a factually incorrect statement criticizing his opponent, Congressman Steve Rothman, on the issue of immigration reform.

Micco hides behind his parents to defend his anti-immigrant views:

As the son of immigrants, Micco said he values the contribution legal immigrants have made to the United States and sees widespread amnesty for illegal immigrants as a slap in the face to my mother and father and to the millions of other people who came to this country through the front door.

Perhaps he should have asked around a little more. I’m a first-generation immigrant, and along with the majority of other immigrants, Micco has lied about our views. The largest national poll of legal immigrants ever undertaken (Feb-March 2006) finds the following:

Not only is Micco’s statement ugly and divisive – it is factually false. He was probably too afraid to state his real feelings so he made up his own “facts” to project his anti-immigrant views onto millions of others.