New Jersey History I Did Not Know: Nazi camps for kids

When I bought my first house, in Hunterdon in the 1980s, I looked in High Bridge, the tiny town in the north hills east of a pretty reservoir and blessed with a train station, and a little main street. But…
Read more

Well, that didn’t take long. But like MSNBC getting the reminder that “Hitler gassed millions” into their chyron within moments, Sean Spicer’s fundamental ignorance of world history has quickly been condemned by the Anne Frank Center. In a message posted…
Read more

… It puts me into a posture where I’m just ready to fight and to resist anything that the Trump administration ultimately does to try to hurt people.” On Wednesday, Senator Cory Booker will testify against Senator Jeff Sessions, who…
Read more

I’m a teacher, not a priest.

Pulling this up top again for the evening. GOP Sen. Joe Kyrillos’ criticism that course material in Advance Placement U.S. History lacks the kind of unthinking, surface-patriotic American exceptionalism that conservatives feel most comfortable with (my description) gets a solid answer here from Helios, who actually teaches AP U.S. History. – Rosi

NJ State Senator Joe Kyrillos has introduced SR 128 – a non-binding resolution that urges the College Board to revise its framework for the Advanced Placement United States History course. Kyrillos criticizes the framework, claiming that

“the AP test doesn’t properly portray our history, the beginnings of our country, its values and its unique role in the world, past and present.”

As an educator for over 25 years  (an AP US History teacher for 8 of them), I am concerned that Kyrillos’ actions and those of his ilk represent an attack on critical thinking and true learning for our nation’s young people. What has become clear to me is that the people attacking the AP curriculum do not really understand it, but even more troubling, they don’t understand what teaching is and what happens in an effective history classroom.

New Jersey History I Did Not Know: Thomas Mundy Peterson & the 15th Amendment to the Constitution

Every week I scan two sources for progressive U.S. history that touches on New Jersey. I highly recommend both. Zinn Education Project promotes the use of the late Howard Zinn’s A People’s History of the United States and other materials – offering free, downloadable lessons and articles for middle and high school learning. And This Week in History, compiled by my old friend Carl Bunin of peacebuttons, proprietor of union-made progressive merch. 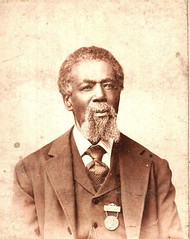 This is Thomas Mundy Peterson of Perth Amboy, New Jersey. And this, from Zinn Education Project, is NJ history I did not know:

On Mar. 30, 1870, the Fifteenth Amendment to the U.S. Constitution was formally adopted. The following day, Thomas Mundy Peterson became the first African-American to participate in an election in a state where Blacks had not been allowed to vote before the 15th Amendment.

He participated in a local election in Perth Amboy, New Jersey. He later held political office and sat on a jury. Decades later in 1989, the school where Peterson had worked as a custodian was renamed after him. That school, the Thomas M. Peterson School, is now annexed to the city’s McGinnis Middle School. There’s a plaque outside the building on State Street honoring Peterson.

In 1884, the citizens of Perth Amboy raised $75 (over $1,000 in 2015 dollars) to buy a gold medallion for Peterson to honor him for his vote. He proudly wore the medal, which featured a clean-shaven profile of Abraham Lincoln, until financial difficulties forced him to sell it. The medal now resides at Xavier University in New Orleans.

I repost this diary about every year on March 25, the anniversary of the industrial accident that might have been prevented at NYC’s Triangle Shirtwaist Factory –  if the stairways and exits weren’t locked (because the owners assumed workers would steal or leave early), if smoking (so common then) had been forbidden around all that fabric, if the lives of the women and girls working there – most recent immigrants – had been valued more. This was a landmark moment in history – progressive history, labor law, and women’s history.

But I bet you never heard of the fire that preceded it – in Newark, New Jersey, at the Wolf Muslin Undergarment Company, where more than two dozen women and girls died first. We only know about it because a Star Ledger reporter, Guy Sterling, wrote about it, and reminded Newarkers, and New Jerseyans, of their own history. The New York Times wrote about Sterling’s year of researching the Newark fire. Sterling is the guy who organized “Requiem for a Newspaper,” the community discussion last year at Rutgers as the Star Ledger left the city, and he’s the author of this book on Newark’s history.

And this morning, I found this great video interview posted by Rosie Uyola of Rutgers-Newark, of Sterling talking about the fire. It’s sensational. And I didn’t know most of it. Thought I should point you guys to it. – Rosi

New Jersey has a long, and awful history with industrial pollution and its residents have suffered for it. But here’s a part of NJ history – with brave women who fought back though they could barely walk, a landmark case and a milestone in regulation and labor safety – and I knew almost nothing about it. I went to school in New York; talk to me about Love Canal. I didn’t know about the Radium Girls, or the Radium Superfund sites in Bloomfield, Glen Ridge, Montclair, West Orange and East Orange. Read on, and if you know more than I did, feel free to chime in. – Rosi

Earlier this year, Mae Keane died in Middlebury, Connecticut. She was, at 107, the last of the Radium Girls.

Had she been more obedient, more apt to be bullied into compliance by her bosses and the corporation for which she worked at 18, she might have ended up like most of the other Radium Girls. Some of them never made it out of their teens. One young woman was sent to the dentist to have a tooth pulled. One yank and her whole jaw came out. Women collapsed; their legs suddenly giving out, their bones porous and breaking underneath them. There was cancer. Early death. And the company tried to blame the women. Typical.

The New Jersey National Guard Museum is located in Sea Girt. If you’re looking for a place to see on a day trip, please look this up. There are jets and tanks out front that one can go right up to and touch. Inside the museum are uniforms from the Revolutionary War right up to current uniforms.

I don’t write this as a promotion for a place. I write this because this is our history. Regardless of your political leaning, this museum came about by our neighbors, our families and our citizens. We should see how the Sea Girt grounds were home to Presidents and Governors who came to review troops. New Jersey participated in every war since the Revolution.

To spend time in a place like this, you’ll see why we choose to live in New Jersey. Why do we want to make New Jersey a better place?

We owe it to our past and our future.

This museum shows what we did in the past. The people that volunteer there truly care about the history and what they have on display.

I urge everyone to take a look at this museum.

…Are Doomed to Repeat It

Cross-posted at A New Jersey Farmer

The educational testing mania that has gripped the country over the past decade has bared a lethal truth: we are terrible at learning history. As a teacher of that subject, I have seen it become devalued as the focus on math, science and language arts tests have rendered history and social science courses less important in the curriculum. Some students even take a lower level history class so their homework load doesn’t interfere with what they consider to be more useful, and tested, offerings.

And this is new, right? Wrong.

That pain in your tush is the bite history just took out of it.

It turns out that the past is telling us what every working educator knows about evaluating both students and teachers based on a standardized test: it doesn’t work and can falsely label people as failing when in fact they are not. It’s as true now as it was in 1845.

It’s been a long, long day. And this post, as noted, isn’t strictly political, but it sure is New Jersey. And it’s cool as hell – promoted by Rosi

Let’s take a break from politics. The New York Public Library’s “Stereogranimator” creates 3-D effects from 19th century stereographs converted into animated gifs. I find them fascinating. Here’s a bridge at Passaic Falls, Paterson, New Jersey about a century and a half ago: