In recent years, Republicans have been at the forefront of denying voters their right to select our elected officials. Of course, the most egregious example is the decision by the Republican-dominated Supreme Court in the 2000 presidential election that stopped the vote count in Florida and handed the election to George W. Bush. More recently, there have been efforts to discourage voters who typically vote Democratic by the Republican governors in Wisconsin and New Jersey.

Wisconsin Governor Scott Walker has a well-deserved reputation for ignoring the law and behaving more like a tyrant than an elected official. The newly minted Republican governor whose notoriety is rooted in his bypassing of the rules to get his union-busting legislation passed, has also been at the forefront of voter suppression. Claiming to be working toward the elimination of voter fraud (a problem which is essentially non-existent), Walker’s legislation makes it more difficult for college students and minorities to vote by implementing stricter identification standards and more stringent residency restrictions.

Here in New Jersey, Republican governor Chris Christie does not yet have the national tyrannical reputation that Walker has, but he is working to make it more difficult for people who lean Democratic to vote. Christie is actively campaigning against same-day registration, using his typically subtle tone, calling this activity “crazy.”

Now, two Democratic Assemblymen, Lou Greenwald and Wayne DeAngelo, have introduced legislation that would enhance the democratic process by making it easier to vote by mail. Their proposal would allow a voter to request vote-by-mail ballots automatically each election cycle. The legislation has built-in safeguards to ensure that ballots are not sent to voters who move or die. It remains to be seen whether Governor Christie will support this measure, which encourages participation in the electoral process. I’m not holding my breath.

It was the battle between “Tax Breaks for Millionaires” and “Helping the Poor and Middle Class” at the Assembly Budget Committee hearing today in Trenton, where State Treasurer Andrew Sidamon-Eristoff spent a grueling 4½ hours defending millionaires and giving lip service to the rest of New Jersey’s citizens. The treasurer’s testimony was long on platitudes and short on details. Clearly, the budget battle lines have been drawn.

Sidamon-Eristoff made it perfectly clear that any legislation to include millionaires in Governor Christie’s “shared sacrifice” would be vetoed with the same alacrity as was exhibited the first time the legislature tried to extend the relatively small tax increase on the wealthy. As committee chairman Assemblyman Louis Greenwald pointed out, while millionaires get tax breaks, the average New Jerseyan is paying $1100 more in taxes than they did last year. 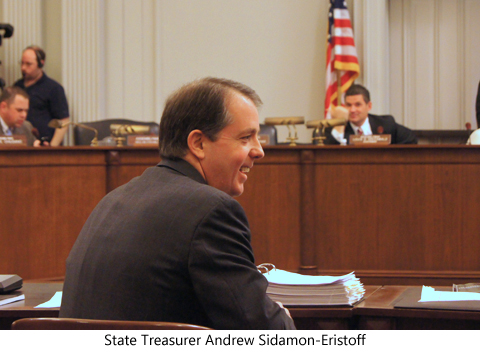 Listening to the People 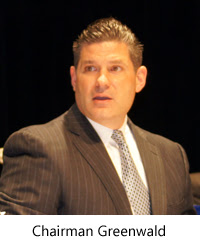 Two million of New Jersey’s 8.8 million citizens live in poverty. According to spokespeople from Legal Services of New Jersey, the number of Garden State residents living under these conditions has gone up eight percent during the first year of the Christie administration. So how does the legislature develop a budget during a recession that meets our social obligations with competing demands from advocates for infrastructure, businesses, museums, the arts, libraries, environmentalists, transportation, fire and police, education, and other agencies that strive to make New Jersey a great place to live and work? That’s the challenge that faces the Assembly Budget Committee, which took testimony from about fifty individuals today at the Blackwood Campus of Camden Community College.

Today’s hearing was the third and final opportunity for these advocates to state their case to the committee, chaired by Assemblyman Louis Greenwald (D-Camden), as the legislators try to construct a budget that is both fair and balanced, and that can survive the veto pen of Governor Christie.

What’s the difference between Governor Chris Christie of New Jersey and Governor Scott Walker of Wisconsin? Both have exacerbated their state’s deficits by giving tax breaks to millionaires while placing the burden of balancing the budget on the middle class. Both have made draconian cuts to services to the the poor, vulnerable, and senior citizens. Both have treated public servants with disdain. But there is one main difference. Governor Walker has been more effective in harming his state because he has a Republican majority in both houses of the Wisconsin legislature. Despite the fact that in New Jersey, many of the majority Democrats are DiNOs (Democrats in Name Only) and, like the national Democrats, have not shown the courage to stand up to the GOP’s destructive agenda, at least there are some in the legislature who are trying to put the brakes on Christie’s policies.

This November’s elections will be critical. Listen to this short video of Chris Christie’s threat to New Jersey, and then continue below the fold.

Chris Christie’s message to the legislature today was more of an audition to be keynote speaker at the 2012 Republican National Convention than it was a budget message. He spewed the Republican Tea Party red meat of divisiveness and union bashing. Since the mainstream media’s love affair with Christie prevents them from presenting an opposing viewpoint, this video shows the Democratic response from Senator Sarlo and Assemblyman Greenwald.

Democratic Response to State of the State Address

It seems like Governor Christie’s State-of-the-State oration is posted on a gazillion internet sites, while the Democratic response is difficult to find. Bill Orr posted some responses yesterday.

Below are two videos, one from NJN where Michael Aron interviews Senator Sarlo and Assemblyman Cryan right after Christie’s address.  The second video is from the Star-Ledger and is a press conference among several Democratic leaders commenting on Christie’s assertions.

“We all agree on the need to improve our economy and create jobs that will help make New Jersey more affordable, and we all know that sustainable jobs and a strong economy will go a long way toward solving our structural budget problems.” – Assembly Budget Chair Louis D. Greenwald

On Thursday in the midst of the RTTT hearing and Governor Christie’s ARC announcement, the Assembly held a special committee hearing on economic development. After the meeting Greenwald said, “It’s also now clear why the governor sent only one official to today’s hearing: the economy – jobs and economic development especially for working class New Jerseyans, are just not his priority.”

I hope that jobs and the economy become a priority for Democrats. What we heard were a lot of words. As is often the case with such hearings, no action plan was immediately forthcoming.  Assembly Commerce and Economic Development Chairman Albert Coutinho opened the hearing by summarizing possible avenues for legislation:

Ok Assemblypersons, it’s now time to walk the talk. New Jerseyans are counting on you to make jobs and economic development your priority.

This is an open thread… Add your own suggestion on what the legislature should do.

The Real World vs. Christie’s World

For July the BLS reported, NJ unemployment was at 9.7%, a slight  increase over both last month and the same month last year, and above the national average of 9.5%. Realty Trac reported home sales in NJ declined precipitously by 55%, from 7,206 in June to 3,196 in July. This is bad news for New Jerseyans, but does Governor Christie care?

On Tuesday the governor signed into law the Fort Monmouth Economic Revitalization Authority. In a press release Assembly Majority Leader Cryan said, “Quite simply, this is all about jobs for New Jerseyans.” In the governor’s press release the word “jobs” is not mentioned once. Instead it refers to loftier notions of “investment, continuity and economic growth.” Does he care that NJ unemployment is higher than the national average?  Does he care about jobs for New Jerseyans?

In order to help people buy homes and reduce current unsold inventory, Assemblyman and Budget Committee Chair Louis Greenwald sponsored a bill to establish a New Jersey Homebuyer Tax Credit Program. Christe vetoed it saying “It would undermine our 2011 budget.” Does he care that home sales fell 23% in May, 27% in June, and 55% in July? Does he care how this impacts New Jerseyans?

In the Quinnipiac poll released today Governor Christie is presented as “winning the hearts and minds of NJ voters who approve 51% – 36% of the job he is doing.” Christie, however, seems remarkably detached from the lives of real people. He couches so much of what he says in terms of costs, finances and the budget, and he seldom talks about the impact of his actions on individuals. His single-minded focus on budget cutting  and reducing the size of government satisfies his limited and short-sighted approach to governing. But does it satisfy those who are un-or-underemployed, concerned they might become un-or-underemployed, unable to sell their house or unable to buy a house. How many others are worried about not receiving a rebate, increased public transportation costs, smaller class sizes, or fewer municipal services?  Do you get any sense he sympathizes with these people?  When will New Jerseyans from the “Real World” strike back at “Christie’s World?”