Thank You! – Statement from the Grewal Family of Hardwick, NJ

The following is a statement to supporters of the Grewal Family, who signed up at the Hardwick Township Unity Rally on November 15th, which was held in response to the cross burning incident on their lawn on November 6th.

The cross was wrapped in a bed sheet that their daughter had made to celebrate Barack Obama’s victory earlier that week.


Arianna, Alina and Gary would like to thank you for participating in the Hardwick ?Unity March,? physically or in spirit.   Thanks for caring!!!  The ?Yes we care chant? still rings in our ears.  Your support by being here goes a long way in restoring our faith and belief in our community and our wonderful country.

The rally was a powerful message, especially to Arianna, that we are not alone as she starts to live her normal life again.

The hundreds of people who were here sent a very strong signal that such bias and racist crimes are not accepted in the world we live in now.  We are all Americans and as Americans we are free to choose our beliefs, our values, our religion, where we live and whom we vote for.  No citizen has the right to dictate to others how they should live. If these cowards thought we were going to roll over and play dead they had another thing coming.  They WILL catch them and bring them to justice.

Again, thank you for your sincere support and have a wonderful holiday season!!

The link below is a moving video of the Hardwick Unity March put together beautifully by Robert Daniel II, LEPOCO Peace Center

“We are choosing hope over fear. We’re choosing unity over division, and sending a powerful message that change is coming to America” OBAMA Jan.2008

Links to previous Bluejersey diaries over the fold.

In defiance of a cowardly act of ignorance and intimidation a community comes together to march for peace and form a circle of hope. 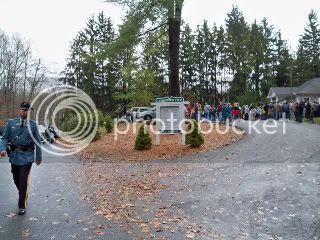 On the evening of the 2008 U.S. Presidential elections, an eight-year-old girl created a banner which read “President Obama – Victory ’08!” With a little help from her parents the banner was hung in their front yard. The next night the banner was stolen. Later it was returned, wrapped around a cross and on fire. On Saturday November 15th, a march and rally, organized by a group of concerned citizens and supported by the Warren/Sussex County branch of the NAACP, took place.

The song “Heal the World With Me” was written by Andy Rajeckas and sung by Gwynne Michaels.

Watch the Video Over the Jump

It was a small remark:

“They all used to go to Depew (swim beach), I think,” Carrazzone said, according to a tape of the July 2 committee meeting reviewed by township emergency management coordinator Robert Krok. “And they’re moving it down and Depew — whew, what a mess that was with all the, you know, Puerto Ricans and, my God, terrible.”

That’s Aldred Carrazzone, Committeeman from Hardwick Township, letting his true feelings slip out in an unprotected moment.  According to the Star-Ledger‘s Mike Frassinelli, Carrazzone “plans to apologize”. But is he apologizing for making the remark or for believing it in the first place?

Racism comes in a variety of blends, some more benign than others.  I don’t know enough about Mr. Carrazzone to say where his sympathies are, and I won’t speculate.  But racism always hurts.  It hurts the target in such a simple and straightforward fashion that it shouldn’t need an explanation.  But it also hurts the person (or persons) who hold the backwards beliefs.

Racism, in this time of growing parity among racial groups, leads a sick mind to paranoia and inexoriably towards a siege mentality.  The declining majority begins to feel slighted by the mere existence of the growing minorities.  Carrazzone’s remarks betray that line of thought.

The township committee can censure him.  He can apologize.  But he can’t unring a bell.  He can’t make those words go away.  But even more than that, he can’t make the beliefs behind them go away.