UPDATED! “They can’t suspend this many of us!” The student walkout at Cherry Hill High School East

This is a Handmaid’s Tale Resistance demonstration, today outside the Freehold offices of anti-choice Republican zealot Rep. Chris Smith. We have video, posted at District 4 Coalition for Change (Facebook); video I believe was taken by my friend Jim Tobias….
Read more

Yesterday, some Trump fans decided to disrupt the weekly anti-Trump rally near Trump’s Bedminster golf course. Our side’s presence was – and is today – even larger than most weeks, because Trump’s at his club soaking up attention, and because…
Read more

Sister Marches … and uh, places to pee at Inauguration.

Don’s John. Let the golden shower jokes commence!  Scores of buses are heading down I-95 from New Jersey for the Women’s March on Saturday, the day after Trump’s inauguration. In fact, according to the Washington Post, far more parking permits…
Read more

Looks like NJDSC has now posted all photos from the 2015 State Conference, Building Our Future, which was May 14-16 at Harrah’s in Atlantic City.

Bonnie Watson Coleman, One of the ’30 in 30′ Women Candidates to Watch

I really had to laugh at Bergen Republican chair Bob Yudin the other day when he called BWC a “political communist.” For one thing, what the hell is that? I get it – he was unnerved by the Bridgegate anniversary, which taking place in his county is a scandal embarrassing his party, and the Democrats’ big guns standing at the GWB, talking GOP scandals. DNC chair Debbie Wasserman Schultz, NJDSC chair John Currie and BWC on that bridge is unsettling for somebody in Yudin’s position. Though, in my opinion it was a pretty routine moment of political opportunism the Dems had every right to engage in, which probably didn’t move anybody’s opinion.

Yudin also said “nobody pays attention to what she says.”. Oh, really. In just weeks, Watson Coleman will be a congresswoman-elect. And the reliably Democratic district she’ll rep will bouy her bedrock progressive instincts and willingness to stick her neck out.

She’s already shown integrity standing behind Barbara Buono last year as campaign chair, when lesser Democrats undermined and backstabbed the candidate, smiling for the camera and jockeying for their own positions. (Your pal Christie doesn’t look so shiny now, does he, boys)?

Now this: MSNBC profiles BWC as one of the most dynamic women candidates running this year. Don’t tell Yudin, but people are listening.

“He’s a decent guitar player, but a vile human being.”

That’s about right. And that’s why a crowd showed up outside Ted Nugent’s show at the Wellmont Theater last night. They weren’t there for the guitar playing, but to protest Nugent’s nasty-ass view of the world and other people. The Wellmont didn’t cancel Nugent’s show, despite calls asking them to do just that. Disgust with his racist and otherwise bigoted statements has cost Nugent gigs, like the casino booking Nugent lost Monday. Nugent calls people who protest him “unclean vermin”. I say there were a lot of good people – better than him – outside the Wellmont last night. My friend Stacy Kay took this snapshots: 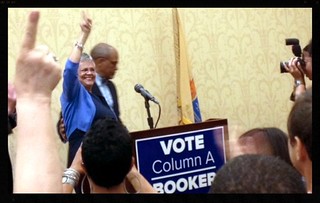 New York State sent Shirley Chisholm to Congress in 1968, forty-six years ago. BWC is set to become the first African American woman New Jersey has ever sent to either house in Congress. I wondered what her thoughts were about that. Turner called the win a “marvelous day” for Mercer County, and its women, especially the African American women. And then she framed her colleague’s win in the context of Rep. Donald Payne’s place in the NJ congressional delegation:

We have one African American male – out of Essex County. But nobody thought that Mercer could produce a congressional woman who was of African American descent. (CD12) is not truly a district like what they have in Essex. (Bonnie) won all over. It wasn’t just in the urban areas.

What kind of win is it? Turner: