Just a week after Donald Trump threatened to ruin a Texas legislator’s political career over minor limits to asset forfeiture, Trump lap dog Chris Christie vetoed a New Jersey bill that would limit the practice. The bill had passed The…
Read more

But There’s No Terrorism Since 9/11

Seriously, no terrorism at all.

The [Piscataway] township campus of the Middlesex County Vocational and Technical School, 21 Suttons Lane, was evacuated Friday morning after a bomb threat against the school was called into township police, authorities said.

And, no, I didn’t forget the anthrax attacks that killed and sickened people — and shut down the Hamilton NJ post office for years — that happened since 9/11 and for which the Bush administration caught no one.

He’s an ex-Marine with five years of active duty and 19 years in the reserve. He was decorated for his service during the Korean War. He’s a nationally known and respected scholar who is highly critical of Roe vs. Wade and supported Alito’s nomination to the Supreme Court. He’s Professor Walter F. Murphy, emeritus of Princeton University, and he’s on the Terrorist Watch List.

Want to guess why? This might offer a clue:

“Be Afraid! Be Very Afraid!” was the conservative mantra long before 9/11, but the Keystone Kops operation known as the War on Terror has given right-wingers license to turn the volume knob up to 11.

And yet the public, working on the evidence of its eyes rather than the blinkered ideology of the Bush cultists, constantly has to be reminded to be afraid only of certain kinds of terrorists. It has the temerity to notice that while Islamist violence abroad is certainly dangerous, we have plenty of homegrown terrorists with light complexions and flag decals on their vehicles to worry about as well. This annoying tendency of the reality-based community keeps conservative pundits and bloggers in a near-continuous state of sputtering Yosemite Sam outrage.

This fear-crazed brand of wingnut political correctness is in full noxious flower this week as Michelle Malkin – whose eruptions of nonsensical outrage occur as regularly as blasts of steam from Old Faithful – rallies the troops against Burlington Township High School in New Jersey, where school and municipal officials staged a mock-terror drill that involved a fictional milita-style group rather than a bunch of swarthy Muslims in turbans:

Journalist A.C. Thompson has written an amazing book that some of you may be aware of, in which he investigates the planes that were used by the CIA in extraordinary renditions. The book is called Torture Taxi, and today, City Belt’s interview with Thompson is online here.

He talks about the Military Commissions Act (which both of our Senators voted for), how he tracked down the planes used, and what the Democrats can — and might not — do to stop the U.S. policy of torture.

“This torture thing, this CIA program, is not something that happens abroad — it’s not distanced from your daily life. The people who make it happen are your neighbors. They are unassuming people who are not necessarily government employees. They provide the cover and provide the infrastructure for the CIA to cruise around the world, kidnap people, throw them in dungeons and torment them.”

Stender Goes Up On TV on Iraq

Linda Stender (NJ-7) goes up on TV today with an ad featuring veteran Gordon from Flemington, NJ.  It starts of noting that Mike Ferguson voted against a $1500 bonus for soldiers serving in Iraq, then moves on to the “Staying the Course message.

Tell Blue Jersey what you think in the comments.

There’s another ad after the jump.  The campaign says they will run both of these for a while, with more ads to follow.

Search for Bin Laden Called Off?

Well the search has not exactly been called off, but everyone in the unit devoted to looking for Bin Laden has been reassigned.

In yesterday’s New York Times there was a story about the CIA unit that for at least a decade, and long before September 11th had devoted all of its time and energy toward tracking Osama Bin Laden.  That unit of  has now been disbanded.  Agency officials gave the reasoning for such a move

Agency officials said that tracking Mr. bin Laden and his deputies remained a high priority, and that the decision to disband the unit was not a sign that the effort had slackened. Instead, the officials said, it reflects a belief that the agency can better deal with high-level threats by focusing on regional trends rather than on specific organizations or individuals.

Michael Scheuer, a former senior C.I.A. official who was the first head of the unit, said the move reflected a view within the agency that Mr. bin Laden was no longer the threat he once was.

“This will clearly denigrate our operations against Al Qaeda,” he said. “These days at the agency, bin Laden and Al Qaeda appear to be treated merely as first among equals.” here

The Death Toll that Does Not Appear on the Nightly News 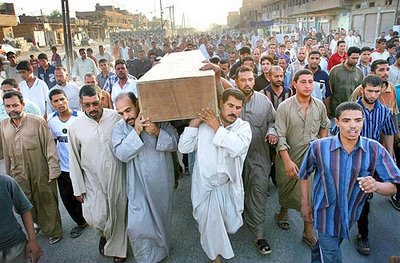 We have heard the daily counts of the nameless and faceless Iraqis who die each day in the conflict that consumes their homeland.  Every evening we hear about 20 Iraqis who died in a car bomb explosion, 40 Iraqis in an attack on a mosque or of the hundreds of bodies that are turning up regularly handcuffed and executed and left somewhere in or around Baghdad. However, there has been no official tally, no running count as with our own American soldiers.  Perhaps that is because there have been no officials to keep count amid the chaos.  Despite several elections only recently has a complete government been seated and it is still remains to be seen how soon of if ever they will gain control of their own country.

Today the LA Times published an estimate of the number of civilian casualties of the Iraq war. That number is 50,000.  As a percentage of the population that is the same as 15000 New Yorkers dieing violent deaths over the course of 3 years.

There are four conditions that need to be satisfied in order for a war to be considered “Just” according to the Catechism which stems from a philosophy that was first established by St. Thomas Aquinas.  They are just cause, proper authority, right intention, probability of success and proportionality.  I never did think this war was Just but certainly from the point of proportionality, that we will be doing more good than we do harm, I am not sure how anyone can continue to argue that this war is just.

In the three years since the attacks on September 11th over 2900 people have died around the world, excluding Iraq, as a result of terrorist attacks.  That number itself should be far outweighed by the civilian casulaties in Iraq.  In addition if you look at these numbers and see that terrorism throughout the world is on the rise, that too should dispell any arguments in favor of proportionality.  If we draw a correlation between these attacks and Iraq or not.  Our invasion of Iraq has done nothing for the overall stability of the world.

Yes, America has not had another terrorist attack since September 11th,  but whether that has something to do with Iraq or not, as citizens of the world and compasionate human beings we should empathize with those outside our borders.  We need to understand and accept the consequences of our actions.  These consequences do not just include the 2500 dead American soldiers they also include the tens of thousands of dead Iraqis and Afghanis whose names and faces we do not remember nightly on the evening news.

Torture is a Moral Issue

Torture is a moral issue. This is the heading for a  quarter-page ad in June 13thâ€™s New York Times op-ed section. It is an announcement of the National Religious Campaign Against Torture which is a non-profit group headquartered in Princeton, NJ that formed early this year. Cardinal McCarrick, Rabbi Jerome Epstein, Dr. Sayyid M. Sayeed, Dr Rick Warren and 22 other prominent religious leaders from a diverse background have endorsed the campaignâ€™s statement against the use of torture and other cruel, inhuman and degrading tactics by our government.

In May, a month that is devoted to the Virgin Mary, Pope Benedict XVI spoke to a crowd at the Shrine of Our Lady of Divine Love just outside Rome. He gave a recitation of the rosary and then spoke of the love of God and of Mary as a sign of that love. Pope Benedict concluded by speaking of the power of love and the current imperative for choosing love over violence in dealing with our enemies â€œthere is a need to convert to God, to God who is Love, so that the world may be freed from war and terrorismâ€.

Also in May, I had the distinct pleasure of hearing Colin Powell speak. He was not most proud of his accomplishments in war, but of his accomplishments in bringing and maintaining peace. He spoke what he believes is the only way to end terrorism. It is, according to a 4-star general, through small acts of kindness that we will end the fear and the hate that feeds terrorism.

If the Pope and a 4-star general can agree to choose diplomacy over bombs and love over violence then why can’t we?

In a letter to the Senate in support of the McCain-Warner Ammendment to the Defense Authorization Act Bishop John H. Ricard, speaking on behalf of the USCCB wrote “In a time of terrorism and great fear, out individual and collective obligation to respect basic human dignity and human rights, even of our worst enemies, gains added importance.”  At a time when the Pentagon is re-writing the Army field manual to remove language that relates to the Geneva Convention and prohibitions against the use of inhumane treatment of prisoners, and detainees at Guantanamo are committing suicide because they have lost all hope this statement is very poignant.

To view NRCAT’s statement against torture go to www.nrcat.org.  Please endorse this statement and tell your legislators that your faith tells you that you must choose love because torture is a moral issue.

A Strategic Vision (R) poll released today has Tom Kean Jr leading Bob Menendez by 32%-30%. Their previous poll a month ago had Kean Jr with a 33%-27% lead. This poll contradicts an FDU poll released yesterday showing Menendez with a 42%-37% lead. In January, that same poll showed Kean Jr with an 11 point lead. Both polls show a positive trend for Menendez.

Interestingly, the Strategic Vision poll also shows that Senator Lautenberg’s approval rating in the state is 50%-33%, which seems to contradict other polls showing him with a worse approval rating.

Bush’s numbers in the poll are abysmal. On his handling of Iraq, only 33% approve and 60% disapprove. The state is nearly split on his signature issue, the handling of the war on terror: 44%-46%. A plurality of 44% want to withdraw troops from Iraq within 6 months; 41% do not. 87% think a UAE owned company should not have control of our ports.