Our suburban state: Tilting the balance

In a flurry of House elections on Tuesday Democrats turned out in droves and significantly over-performed expectations by posing serious challenges to Republicans in staunchly GOP districts. In Ohio’s 12th district where  Dem. O’Connor appears to have lost by 1 point,…
Read more

What About Trump’s Living Predecessors?

Last night, there was a vigil outside the Hunterdon Art Museum, a well-known gathering place right on this little Hunterdon town’s river and main street. I wanted to share with you this post by my friend Alexa Offenhauer, one of…
Read more

At the Democratic and Republican conventions this month there is a chance (long odds) that both NJ’s Senator Cory Booker and Governor Christie will be nominated as Vice President. The crazy history of nominating Conventions. In 1964 Barry Goldwater bypassed…
Read more

The delegate “math” is often mentioned in the media but seldom clearly explained. So it seemed time to check it out. Here is the math pertinent for the Democratic party’s first delegate convention vote. If one candidate wins a majority…
Read more

Perhaps my favorite media critic is Bob Somerby, who, for years, has run his Daily Howler blog completely independently.

Somerby’s primary thesis is that the media loves to write “scripts” about politicians. Once a script is established, facts are then distorted, twisted, and sometimes straight-out made up to support the preferred conventional wisdom that has been accepted and endorsed by those who occupy influential positions in the press.

These scripts have a standard form: a trivial, useless “fact” tells us something allegedly important about some prominent person. Perhaps the most famous example is Al Gore is a liar: he said he invented the internet! It doesn’t matter that Gore never actually said it; what matters is that it has been repeated so many times that it has become “truthy.” And it can be thrown into a column or a TV appearance casually, the declaimer knowing full well that, even if they are challenged, they can simply shrug off any criticism.

I’m reminded of Somerby today after reading what is an otherwise serviceable column from the Star-Ledger’s op-ed page editor, Tom Moran. Moran, writing on the fallout from Chris Christie’s Cowboy-gate scandal, says this:

Our West Coast friend Digby gives us a year-end present: as concise and perceptive a description of Chris Christie as you could ever imagine:

But I can think of a certain super macho conservative leader who takes pride in ruling with an iron fist whose closest staff members were revealed explicitly instructing people to use the power of the governor’s office to exact revenge on political enemies. That would be Chris Christie, of course, the bullying alpha-male who managed to fend off accusations of being a bullying alpha-male by pleading that he didn’t know nothin’ about birthing no babies and that his staff hurt his feelings by doing exactly what anyone would have expected Chris Christie to want them to do.

CD7 Dem Janice Kovach is back on the June ballot

Janice Kovach, who saw a chunk of her petition signatures invalidated by the Division of Elections, is back on the June ballot. Kovach prevailed before an administrative law judge whose ruling came down today.

Kovach announced she was running to unseat Rep; Leonard Lance back in January. Kovach is the NJ state Democrats’ longtime party Secretary, the Hunterdon County Democrats’ Vice-Chair and the mayor of Clinton since 2012. She also ran the Division on Women under Corzine.

A chunk of Kovach’s signatures were disqualified because the person gathering them (the circulator in elections parlance) did not live in the 7th congressional district. Administrative Law Judge Susan Scarola overruled that decision today. Kovach submitted affadavits from some of her signers which Scarola said should have been accepted. Kovach was represented by attorneys at Genova Burns, a firm specializing in election law. Her attorney, Rajiv D. Parikh, said Judge Mary Jacobson ruled recently that it is unconstitutional to require petition circulators to live in the same district as the candidate.

So Dick Codey’s out. Too bad: I like the man, I like the politician, and I think he would have been a good candidate. Feel free to disagree in the comments.

But right now, the only Democrat who is willing to publicly express her desire to take on the admittedly very popular Chris Christie is Barbara Buono.

Slowly, the endorsements are trickling in from throughout the NJ Democratic party. But there is hardly a rush to get behind Buono – at least until the rest of the potential candidates, like Senate President Steve Sweeney, make their intentions known.

The non-endorsement-that-sounds-like-an-endorsement of South Jersey Democratic boss George Norcross – who praised Buono before Sweeney has declared his intentions – is indicative of what the party leadership must be thinking: it’s admirable that Buono wants to go up against Christie, but can she actually win?

I’ve made this analogy before, but I think it’s worth considering again: 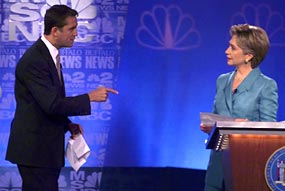 Yes, Buono is not a former first lady; that’s a big advantage that Hillary Clinton enjoyed in the New York Senate race. But the dynamic here is similar: Clinton – a smart, capable woman – made her opponent, Rick Lazio looks like a misogynistic jerk just by letting him be himself.

Remind you of anyone?

Chris Chrstie has a problem with women: he regularly insults and berates them, and he pushes policies that deny women adequate health care. His war on teachers is a proxy war on women. Pre-Sandy Christie had a big gender gap in his favorability ratings; it would be foolish to think the storm blew that gap away permanently.

There is a serious case to be made that the best way to beat Chris Christie is to run a woman against him. Is he disciplined enough to keep his misogyny in check? I don’t think so – and that would play to Buono’s benefit in a unique way.

Chris Christie will be very hard to beat, but the best chance we have is to attack his vulnerabilities hard. Buono is poised to do this in a way no other serious Democratic contenders could. I don’t know if that will be enough, but it is an angle worth considering.