UPDATE 5:48pm: A few minutes ago at a Somerset Dems St. Patrick’s party, Chair Peg Schaffer announced the Union vote to her crowd, and talked about the possibility that Weber will drop out of the race, telling the audience that Somerset…
Read more

UPDATED:  As predicted, the oft-delayed Union County Dems vote for their CD7 endorsement has now been canceled. Rescheduled to Sunday, March 11 at 4pm CD4: I do feel like this is a firm grip on the obvious kind of post, to tell you that…
Read more

Scott Salmon today becomes the second candidate to drop out of the crowded CD7 Democratic primary field, and the second to endorseTom Malinowski, pictured above. Lisa Mandelblatt, who at one time was the field’s fundraising leader, dropped out during a…
Read more

In CD7, Linda Weber gets the line in Somerset, Essex

This morning, Essex County Democratic Chair LeRoy Jones announced Essex is awarding the county party’s support to banker Linda Weber, one of 6 candidates vying for the nomination in the DCCC-targeted CD7 race. Essex has one town in the district;…
Read more

Dan Damon is a longtime blogger in Plainfield, a former PR flack for the city, mayoral candidate, general gadfly and community volunteer.

He’s also usually on the opposite side of issues from political powerhouse and County Democratic Chair Jerry Green, the Speaker Pro Tem of the Assembly. Damon is also a supporter of Plainfield Mayor Adrian Mapp, who is an on-again off-again ally of Green’s, and is currently very off-again and filed a primary slate against the party line.

Plainfield police have charged Damon with having oral sex with another man in a car in the view of other adults.  Since Damon was appointed to the Public Library Board by Mapp, Green is trying to tie Damon’s legal problems around the Mayor’s neck.  It’s the kind of blunt force attack Green is known for.

But Green’s statement to the Courier News is downright bizarre.

“I’m shocked that everybody is taking this so lightly,” Green said Thursday. “This is a 75-year-old man having sex with a 23-year-old man who happens to be a Latino.”

“The mayor has yet to come out and say anything at all, which is totally shocking. It’s not that he doesn’t know that (Damon) has a sickness. I’m just hoping nobody gets killed or hurt and that somebody in the administration recognizes that this is a danger to society.”

I just wonder why the hell the Union Democratic Chair – in losing a woman legislator of great value in Linda Stender but with a rock star woman ready to run in Colleen Mahr – has to reach back to pull a male lobbyist back into play. 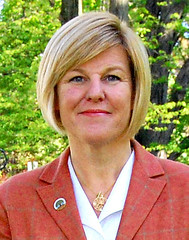 To a link in this AM’s News Roundup detailing the internal party struggles in Union County to set a successor to Assemblywoman Linda Stender, I wrote: GO COLLEEN MAHR! I should say why.

Linda Stender is exiting under the worst circumstances the seat she held for 13 years. I’m heartbroken watching her go. I know some are supporting Mahr to keep this a woman’s seat. That’s not exactly my reason. Watching the barely participatory Clarence Thomas succeed the great jurist Thurgood Marshall cured me of ever thinking seats should be reserved for members of specific demographic groups.

But here’s the thing. New Jersey is still a long way from parity for women in the NJ Legislature, where only 27.5% of senators are women and only 31.3% of assembly members are women. In both cases, Ds do better than Rs. (Numbers courtesy of CAWP). But it isn’t enough, not nearly. And the backstage party machinations of this week disappoint me greatly. Barbara Buono’s campaign posted this video of snippets from last Saturday’s bus tour through Union and Essex counties on the Bus for Progress, the non-profit, grassroots project headquartered in Monmouth County devoted to voter registration and events supporting progressives.

There is a group of Democrats in Union County who have their power-base in the Elizabeth School District.  They keep trying to move out into the Elizabeth city government and every two years take on Senator Ray Lesniak.  They profess to be reformers going against entrenched bossism, but two years ago School Board President Marie Lynn Munn was arrested for stealing low-income lunch vouchers for her kids (along with three others), and recently Superintendent Pablo Munoz and former board President Rafael Fajardo have to pay back $65K for a lawsuit they had the district pay for related to Fajardo campaigns for school board.

Now, apparently they’ve taken to harassing their students who get involved in politics — at least the ones who do so on the wrong side:

When some Elizabeth High School students took an after-school job working on a political campaign Union County, they said they were just hoping to earn some money and a real-world lesson in civics.  …

Students who work as canvassers for Lesniak said they were pulled out of class one by one Monday and peppered with questions by the school’s vice principal, Thomas O’Donnell. Senior Tatiana Ospina said the questions included: “How much do you get paid?” “How long do you work for?” “Do you wear your school uniform during the job?” “Who is your boss?” “Who else works at this job?”

Oh, but quiet interrogation certainly wasn’t enough.  No, the administration decided that public outing and shaming was more appropriate: