Phil Murphy’s new ad: “Bridges”. What do you think of it?

“They’re biggest triumph was a traffic jam.” “We are better than this.” – pullouts from “Bridges” It’s not much of a reach to pile onto Kim Guadagno, Bridgegate’s dangerous trickery. Like the smart prosecutor he was, Christie managed to insulate himself…
Read more

United States Attorney Paul Fishman, in speaking to the press after today’s hearing at the Federal Courthouse in Newark, declined to speak about the Hoboken allegations. Hoboken’s mayor charges that Lieutenant Governor Kim Guadagno threatened her in a private conversation, that state funds the city needed for recovery after Hurricane Sandy would be held up unless she made decisions in favor of a redevelopment project important to a client of David Samson. Wall Street Journal reports that investigation has “gone quiet”.

For Dawn Zimmer’s Statement about the Bridgegate indictments – Go to the jump page:

From David Samson’s call log, after hours on the first day of the Bridgegate lane closures. 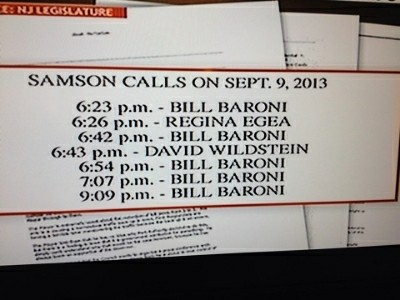 David Samson, as a former NJ Attorney General was once the chief law enforcement officer in the state. And at nearly 75 is a trusted elder in Christie’s innermost circle. Close enough, that Christie brought Samson to celebrate with him when he was installed as RGA chair in Arizona last year.

Steve Kornacki asks Matt Doherty a direct question. Does he answer it?

First rule of projecting your own credibility in a TV interview: If you’re asked a direct question, give a direct answer. Does Matt Doherty do that here? He’s asked whether Chris Christie’s self-exonerating report (by lawyer Randy Mastro) correctly portrays him overhearing a conversation between Hoboken’s mayor Dawn Zimmer and DCA chair Richard Constable, and hearing no promise of Sandy aid in exchange for Zimmer greenlighting Christie-favored development. Does Doherty answer Kornacki’s direct question with a direct answer?

Emotional. Erratic. Crying. Habitually concerned about how she was perceived by the governor. Jilted by Bill Stepien. Going on talking jags about her failed love life with Stepien.

This is how Christie lawyer Randy Mastro sums up Bridget Kelly in his slick (but flawed), exhaustive (but incomplete) 360-page report ‘exonerating’ the Governor. It’s an astonishing way to discuss a woman who, whatever her personal challenges, was also a Deputy Chief of Staff to arguably the most powerful governor in the country. This is not an insignificant position, and it is a level to which confused little ninnies do not rise.

Can you imagine either Mastro or Christie suggesting these things about a man? In fact, let’s be specific: they claim her doomed love affair was with Stepien. But do they attribute his decisions to a troubled personal life?  No, they do not. And Christie, who’s had an hour of press conference questions, and a TV chat with Diane Sawyer since, has done nothing to distance himself from Mastro’s characterization of Kelly. So consider it his, too.

They’re entirely comfortable doing this to this woman; comfortable enough to put it in writing, say it out loud. Read: She’s a girl.. In the worldview of this “investigation,” that’s all you have to say, because the rest of it does not have to be said. It’s understood: She’s a girl. You know how they are. Unstable. For all we know, probably on her period. Who knows why she did it? Go figure girls. As though screwing with the safety and ease of movement of hundreds of thousands of people on the busiest bridge in the world was simply the worst PMS ever. Mastro’s team didn’t even interview her and still he sums her up in strictly personal terms. Just her.

Look, I have no sympathy for Bridget Kelly. None. I don’t care that she comes to court tugging your heartstrings in pearls, weeping and looking powerless. She had power. She used it as a cudgel, risking public safety of hundreds of thousands of people for some kind of political retribution. And did so gleefully and in writing, mocking the people she inconvenienced. So, screw her. She’s earned the fight she’ll have in court.

In Editorial Director Tom Moran’s luke-warm mea culpa article, apologizing for the Star Ledger endorsement of Chris Christie in the re-election campaign, Moran said, “We regard Christie as …  at least until now, a man who is better at talking than governing.” Indeed the man can talk. He carried a big stick and a big mouth as U.S. Attorney. Previously as a freeholder his “talk” temporarily cut short his political career and only gained him a lawsuit.

During Christie’s first gubernatorial election campaign some of his handlers were aghast that he would not follow their script. He won the election with his “straight talk,” loose promises, and a loud Jersey persona that some liked. Once in office his aides decided that his unrehearsed comments, stage performance, and even bullying could be put to good use in Town Hall presentations which as time went on became ever more glitzy.

Many have realized for some time that his faux populist comments and explanations bore little relationship to what he really thought or was doing. There have been many revelations in the past three months about what was actually happening in the Executive Office and the re-election campaign –  the over-reaching desire to gain Democratic endorsements, offering favors to RGA donors, and treating Sandy recovery monies as a political slush fund. To compound matters he has been caught in a number of untruths (how much he knew the mayor of Fort Lee and when was the last time he saw David Wildstein.)  He left many of us bewildered over his timetable of what and when he had knowledge about Bridgegate. A lot of off-the-cuff talk.

In the end both his talk and his governing are his downfall.

For more about the Legislative Select Committee on Investigation, Assembly comittee meetings, and the response from Dawn Zimmer’s lawyer to Christie’s lawyer, go below the fold.

Today there are so many Chris Christie investigations and allegations that we are almost overwhelmed. For years Blue Jersey and others have been sounding the alarm about Christie. Our Wizard of Oz governor was able to keep Republicans, Independents and even some Democrats so under his sway while he staged his Town Hall meetings that he engineered an overwhelming re-election victory. Now people are looking behind the curtain. The national attention may wane as his Presidential prospects dwindle (although it would return if he or his aides are charged with crimes.) Regardless, New Jerseyans remain concerned, and with good reasons. Let’s review the reasons below:

See below the fold other key allegations and investigations that could reveal the Wizard is a fraud, plus, events today.

Around and around it goes, and where it will stop nobody knows. In roulette the ball will eventually fall into one of 38 pockets. In Bridgegate and Hoboken Hold Up, there may be more possibilitiies. Some people probably have a better idea than others as to where the ball will stop. Here are some of them:

Gov. Christie spent two hours before the press protesting his innocence, and since then has uttered not a word on Bridgegate. However, he would have to be a dunce if he hasn’t figured out by now most of what happened and where it’s likely to end. Nor has he spoken out on Mayor Dawn Zimmer’s claim, but he should be able to remember whether he asked Lt. Gov. Kim Guadagno to pressure the mayor. Zimmer was quite convincing in what she alleged.

David Wildstein, the bad boy from Christie’s school years, ordered the Fort Lee lanes closed, abruptly resigned from the Port Authority, provided  incriminating documents under subpoena, and took the 5th amendment before a legislative committee. Now he appears willing to tell more if he is granted immunity. He does know more and could probably point the finger at others and explain why this dumb plan was implemented.

Bridget Anne Kelly while Deputy Chief of Staff issued the famous memo to Wildstein (“Time for some traffic problems in Fort Lee”) which set the wheels in motion. For that she was immediately fired when Christie says he read the emails. If she was acting on orders from someone else she might be particularly unhappy, unwilling to take all the blame and eager to reveal who told her to initiate the plan and why. The Governor’s office says her communications are subject to Executive privilege, but she used her personal e-mail in some cases and may provide some interesting reading.

Bill Baroni was once a well-regarded Republican legislator who went against Christie’s wishes and voted in a Senate committee for marriage equality during an earlier ill-fated effort. As the top Christie appointee to the Port Authority he appeared mean and foolish, maligning the late Sen. Lautenberg, trying to hold information back from the public, and insisting that the lanes were closed for a traffic study. He was there (until he abruptly resigned) and has a tale to tell.

Former Campaign Manager Bill Stepien, Chief of Staff Kevin O’Dowd, and Chief Counsel Charles McKenna are all under subpoena, were a pay grade above Kelly, only one degree away from Christie, and in many cases  giving out orders on behalf of the governor.

Go below the fold for others who might know better where the ball will stop, and for today’s scheduled activities which include the governor out and about but not willing to meet the press.

To be clear, this tweet is not from Joe Vincenzo, Sr. the Essex County Executive. It’s from his son, same name – @JGDiVincenzo. It came to us via anonymous tip (thank you). I don’t think the son’s in the politics business, which is one reason I hesitated before posting this.

Here are the reasons I decided to post it: (1) Check out his Twitter profile (screen cap below the fold), in which he includes the fact he’s the “son to the Essex County Executive Joseph N. DiVincenzo. Fair game, then. (2) The account is also followed by numerous legislators and reporters. (3)  DiVincenzo’s tweet is directed to Anderson Cooper last night in the 8pm hour, when Dawn Zimmer was giving this interview.

I shouldn’t be amazed. But I am. So, this question is especially for Essex Democrats:  Is this family’s Christie-enabling contempt for Democrats OK with you?

#AC360 #Democrats in #NJ are just trying to make names for themselves. They're attempting to make themselves relevant. #bridgegate