“If a PhD in education can’t follow legislative process, how can the average citizen?”

A Blue Jersey reader emailed me Friday with the above question. Indeed, the system is convoluted. She was concerned about a bill mentioned in my diary: The Assembly abets Christie to allow important bills to languish.

The bill in question is Assembly 448 / Senate 165, which as the NJ School Board Association, explains, “provides a new career ladder for New Jersey’s educators who choose to remain in the classroom rather than moving into an administrative or supervisory role.” It also creates an 11-member Teacher Leader Endorsement Advisory Board.”

This bi-partisan bill was passed by both houses with not a single dissenting vote. So one might think it was a slam-dunk for Gov. Christie to sign it. Also it was sent to him at the end of July. One might think that he would have taken action by now.

Chris Christie News: No One Cares 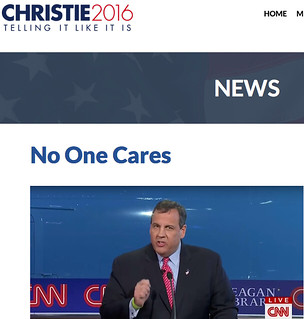 Yes, this is a screenshot from Chris Christie’s campaign website right now, on their “news” link.

I’m not going to link to it, you can find it for yourself, if they haven’t already switched out their headline. The joke that tells itself isn’t what Christie 2016 was going for, of course. It refers to Christie’s camera opportunity in Wednesday’s debate where he pointed out that no one cares about the cat fight between Donald Trump and Carly Fiorina, or their business careers. You can also read quotes from the likes of Elizabeth Hasselback and eternal fanboy Joe Scarborough about how Christie managed to bring the discussion back to “the people”.

The Christie campaign sent out the link in a brief fundraising email – titled “time to grow up” – about his stand against “petty name calling”.

Text of the email, on the jump page.

The upcoming visit of Pope Francis to Philadelphia and the accompanying World Meeting of Families (which may bring 2 million people to Center City) presents many challenges regarding the Constitutionally mandated separation of church and state.

Because the Pope is a head of state, the normal security afforded to a person in that position does not present a constitutional problem. But there is also a religious aspect to his visit.

Recently, the Cape May city government announced that they will be streaming a live broadcast of the Papal Mass in their Convention Center and one of the outlets handling ticketing will be their City Hall. This is clearly a case of the government promoting a religious event.

When this was brought to the attention of Americans United for Separation of Church and State, they sprang into action. They sent a letter to the Cape May city government (see the letter below the fold) outlining how the event, as currently planned, may violate both the U.S. and New Jersey constitutions. Appropriate judicial precedents are cited, and AU goes on to provide suggestions on how this event may be provided without government sponsorship.

Pope Francis’ popularity among Americans, both Catholic and non-Catholic is unprecedented. But the organizers of his visit need to pay as much attention to the Establishment Clause as they do to safety and logistics.

Disclosure: I am a card-carrying member of AU because I believe the First Amendment clearly requires separation of church and state.

Our editor Rosi Efthim said about Gov. Christie, “Despite his protestations to the contrary, he has no moral and ethical core. It makes shifts in positioning look facile.” Nonetheless, soon he will return to NJ, at least for while. A Monmouth poll found his job rating stands at 36% approve to 58% disapprove. Even Republican office holders are distancing themselves from Christie including Assemblyman Sam Fiocci (R-1), and Cumberland County Freeholder Jim Sauro who said, “Don’t start blaming us for his issues.” So Christie will come back to face a host of unresolved matters and ill-will from many quarters with baggage that contradicts what he previously said, exposes his lack of an ethical core, makes it hard for him to explain his flip-flops, and difficult to govern.

Below is a sampling on such subjects as Planned Parenthood, marijuana, immigration, common core, teacher pensions, guns, taxes & budget:

Judge rules in favor of Exxon and the State

Superior Court Judge Hogan (retired) ruled today, “The court finds that the proposed consent judgment is fair, reasonable, in the public interest, and consistent with the goals of the Spill Compensation and Control Act (“Spill Act”). It therefore approves the Consent Judgment.”

The judge begins his written opinion stating, “Nearly any consent decree can be viewed simultaneously as ‘a crackdown’ or ‘a sellout.'” Environmentalists today say the Exxon and NJDEP settlement for $225 million of natural resource damages estimating more than $9 billion is a sellout. “We believe this settlement is wrong and violates the Spill Act and the Public Trust Doctrine and sells out Natural Resource Damages.” The groups plan to appeal the decision to the Appellate Court.

“Our Delaware River has been done a great disservice by this settlement. That the Court would sign off on this sell out by the Christie Administration without even giving us our fair day in Court is a travesty,” said Maya van Rossum, the Delaware Riverkeeper.

“If this seal of approval of the dirty deal between Governor Christie and Exxon Mobil is not overturned, it not only codifies it’s OK to destroy the environment and rip-off taxpayers, but provides a road map to encourage it,” said David Pringle, NJ Campaign Director, Clean Water Action.

Why This Jewish American Supports the Iran Deal

Alex Law is running in the 2016 CD1 Democratic primary for the seat now held by Donald Norcross. Cross-posted with Huffington Post. Promoted by Rosi.

As a member of the Jewish community and someone who has traveled to Israel, I am deeply concerned about making sure Israel is as safe as possible. Even Americans that do not identify with the Jewish community care about Israeli’s safety because they are our greatest ally in the world’s most turbulent region. As an American, as a Jew, and as a citizen of the world, I believe strongly in the recently agreed upon Iran Deal.

On 9/11, I was a 5th Grade Safety Patrol Captain at my elementary School. Now, 14 years later, I am a candidate for U.S. Congress that is happy to see we are finally almost out of our wars in the Middle East. This Iran Deal is an agreement that will promote long lasting peace. Here are three compelling reasons why this deal is good for the United States, Israel, and the world:

1. This deal is good for America because it keeps us out of another expensive, bloody, protracted war in the Middle East that we can’t afford.

The United States is the greatest country in the world. There, I’ve said it. But, even the United States cannot afford another bankrupting war in the Middle East. We have tremendous issues that are fissuring our society whether it be income inequality, the #blacklivesmatter movement, Wall Street reform, crippling debt…the list goes on. As a society, we need to have an earnest conversation about how to fix these issues, and an expensive war would not only shift our gaze, it would make the problems worse.

Fortunately, I was outside of the country when Chris Christie sank to his latest new low:

The New Jersey governor was on CNN on Sunday, where host Jake Tapper asked, “At the national level, who deserves a punch in the face?” (Why would Christie get that question? Because he has made it known he likes to deal with bullies by punching them in the face, an approach that would work well in the Oval Office, no?) According to this story by my Post colleague Lyndsey Layton, Christie did not hesitate with a response: “Oh the national teachers union, who has already endorsed Hillary Clinton 16, 17 months before the election.”

If you’re at all shocked or surprised by this, you haven’t been paying attention to Chris Christie. The man insults teachers as easily as you and I breathe.

Taking On the South Jersey Goliath

Whether you’re a disciple of South Jersey Democratic boss George Norcross, or just someone who is running for political office on the Democratic ticket, conventional wisdom says that you don’t get very far without kissing George’s ring. Even those people who are not part of his inner circle take pains not to piss him off if they hope to win an election here.

So challenging George’s brother Donald, who was handpicked to replace another Norcross acolyte who resigned under a cloud of scandal, is a hapless task, right?

Don’t tell that to Alex Law, a 24-year old systems analyst who has put his career on hold in order to challenge The (South Jersey) Donald.

Today, I sat down with Law to discuss his seemingly quixotic quest, his positions on key issues, and his plans for the campaign.

This is what happened when bigotry showed its face in Franklin Township.

“The days of shaming people because of their identity are gone.”

Not long ago, bigots and fearful people could use intimidation to force gay people to live their lives fully or partly in the closet, afraid to lose a job, a position, a friend, and sometimes unable simply to be themselves.

Last night we witnessed an outpouring of community respect for Franklin Twp School Board President Ed Potosnak, who came under attack from board colleague Pat Stanley for a pro-equality speech made to Franklin HS grads on the very day of the SCOTUS marriage decision. Clear in the speech is that Ed is gay. As dozens of people stood to speak at this meeting – for 90 minutes – several things became clear:

(1) Homophobes still wanting to bully gay people – be warned. Ms. Stanley was told in no uncertain terms that she was the one whose words were unacceptable, and she is the one who isolates herself.

(2) The anti-gays often have other unsavory tendencies. Turns out Stanley also voted against the district’s breakfast program, prompting a wave of scowls in the room.

(3) Franklin’s home to all kinds of people. And parents, local leaders and residents want kids to know that whoever they are will be met with acceptance and support. That includes board presidents.

Adding (4) Stanley keeps referring to Ed’s words as “a political speech” or turning graduation into “a political event.” In fact, the marriage decision is history now and the future for graduating students. Related, noonstar takes issue with what I wrote – my calling Ed’s a pro-equality speech – and the objection is thoughtful and worth reading.

Ed Potosnak is getting married in a few days. And what this community gave him last night is better and more life-affirming than anything anybody could give him wrapped into a box with pretty paper and ribbon. Love wins in Franklin Township. And now let me add mine. Congratulations, Ed. You deserved it.

Yesterday, I wrote about the misuse of state resources by the Christie for President campaign when it contracted to use the gymnasium at a public high school for the governor’s formal presidential declaration announcement. From the documents supplied by the school, it appears that taxpayers footed the bill for the rental and that state employees were involved in executing the contract.

As the expression goes, “timing is everything”, and today, the Senate State Government, Wagering, Tourism & Historic Preservation Committee held a hearing on S-2949, a bill sponsored by Senator Majority Leader Loretta Weinberg that would require “expenses incurred by Governor during out-of-state travel for political activities not be paid with or out of state funds.”

Because my post was also related to misuse of state funds, after reading it Senator Weinberg asked me to come to Trenton to testify in support of S-2949, which I was glad to do.