It didn’t take long for ex-NFL bad boy Jon Runyan to bring up Shelley Adler’s residency. In a statement issued today, Runyan’s spokesman said, “After the Carl Lewis fiasco and the public backlash towards him, you would think candidates would be more wary of seeking elected office in a district that they don’t actually live in,”

Ignoring the fact that the backlash against Lewis came not from the electorate (who were denied a vote for Senate) but from the Republican Party, a party whose middle name is “voter suppression”, the Lewis case and the Adler candidacy are two different things.

Lewis’ case is governed by the New Jersey Constitution and the ultimate judicial decision was that the dual-state long-time New Jersey resident did not meet the somewhat ambiguous residency requirement. Adler’s case is different. The US Constitution only requires that a candidate be a resident of the state from which she is elected. Shelley Adler has been a resident of New Jersey, and of the third district, far longer than meshugina Michigander Jon Runyan has. Bottom line: Adler is a New Jerseyan, Runyan is a carpetbagger.

Neither Shelley Adler nor Steve Rothman is required to move into their newly configured congressional districts, but both have indicated that they will do so. In the case of the third district, Runyan should run on his record, not some artificial boundary line that has no bearing on the race. If he does, Shelley Adler will be our next congresswoman. 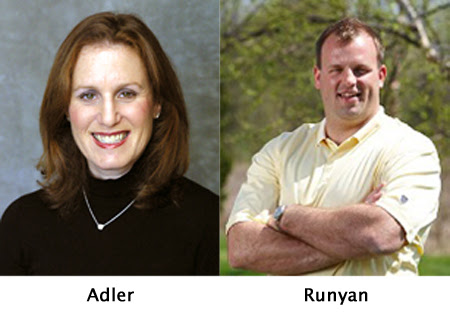 The one-upsmanship of endorsement press releases continues, a list of Latino leaders supporting Steve Rothman we posted in the diary below this, and now Labor and infrasructural Democratic endorsements for Bill Pascrell.

At a certain point, you have to wonder whether these endorsement lists are canceling each other out, or even confusing rank & file voters. But to be honest, some of the sturm und drang between proponents of these two Democratic congressmen thrown together by redistricting is playing out at Blue Jersey. So, I trust the Blue Jersey readers will tell us whether this is helpful in their decision or just so much noise.

New Round of Steve Rothman Endorsements

In the one-upsmanship of key player endorsements in the tense primary contest between Bill Pascrell and Steve Rothman, a new round of supporters came today from Rothman, followed by a new list from the Pascrell camp. We’ll post the newest Pascrell list later this afternoon.

A few days ago the decision by key Latino leaders in Paterson to stay neutral in the Pascrell v. Rothman primary was seen as a setback for Pascrell. Paterson, where Pascrell was born, won his first election (Student Council President) and served as mayor, now has a large, active Latino population. It’s been the district’s home base. Leaders like City Council members Julio Tavarez and Rigo Rodriguez, Board of Education VP Alex Mendez and Commissioners Wendy Guzman and Pedro Rodriguez cited both incumbent Dems support of the DREAM Act and Comprehensive Immigration Reform, healthcare for all, and protecting New Jersey from terrorism, policies common to both men and appreciated by those Paterson leaders.

Steve Rothman today responded to this with a fairly well-timed list of endorsements to add to his list, not from Passaic where some key Latinos electeds are still neutral, but from Bergen and Hudson counties.

Rothman’s newest endorsements, after the fold.

In the increasingly tense post-redistricting primary contest between Rep. Bill Pascrell and Rep. Steve Rothman, Pascrell has rolled out another series of endorsements, this time of first responder and public safety organizations:

We don’t generally post press releases in the form they come to us. But the balance of this release was pull-out quotes from the leadership of the organizations. I thought some of you might want to read those quotes. Below the fold, the quotes.

Among the scores of Democratic politicians in today’s crowded Marriage Equality press conference was one federal official, Congressman Rush Holt. Holt represented the entire New Jersey congressional delegation – all seven congressmen and both senators – in expressing their support for the Marriage Equality bill, S1. Holt’s brief remarks are below; the text of the letter is after the fold.

Rothman Can Still Change His Mind

How to strike the right note in this diary. Now, that’s a challenge. As someone who has been an outspoken fan of primaries, I certainly can’t and won’t join the chorus of Democratic leaders horrified by Steve Rothman’s decision to run against Bill Pascrell in a primary solely because a primary is expensive or can be divisive. Sometimes, primaries are important ideological fights and can be valuable party-building opportunities.

Unfortunately, the situation in NJ-9 is clearly neither: Steve Rothman, unhappy with the outcome of Congressional Redistricting, is moving from his home in Fair Lawn 10 miles east to somewhere in Englewood for the sole purpose of challenging his fellow Democrat, Bill Pascrell, because he calculates that’s the best way to stay in Congress.

Instead of using his sizeable war chest – and up to $2 million additional dollars of funding from the DCCC – to challenge Scott Garrett, we now get to watch him spend that money against his friend, a democratic colleague with whom he has no ideological or political dispute. At a minimum, I considered this a disappointing decision, which I assumed was reached after much soul-searching.

So, I was shocked to learn that Rothman never seriously weighed running against Republican Scott Garrett. While nearly every democrat in New Jersey rejoiced at what appeared to be the potential finally to take out our most conservative tea-party Congressman, Steve Rothman never even seriously considered that opportunity.

That’s a huge loss for the Democratic Party. Rothman is running away from a winnable fight with Scott Garrett, and running against one of the most effective – and most progressive – members of Congress. If the City of Paterson had been moved into Scott Garrett’s district, we all know Bill Pascrell would be all in trying to take Garrett out. And that contrast is something I think Democrats can and should fairly take into consideration when evaluating who they are supporting this June.

It’s no secret where I stand.  I was on a long list of Bergen, Hudson and Passaic County officials endorsing Bill Pascrell.  I’m standing with Pascrell for a lot of reasons – his strong record fighting for the middle class, his tireless work to obtain national park status for the Great Falls and his commitment to job creation.  But I’m also disappointed.  Disappointed Rothman would rather start this fight than take on a Tea Party Republican we’ve been trying to oust for years.

As the Record’s Al Doblin noted, if Rothman were to run against Garrett, “Even if [he] lost, he would win” – a hero among democrats for taking on the fight. Instead, Rothman’s putting himself in a position where the exact opposite might happen.

I’m still hoping he reconsiders. Or at least gives it serious consideration.

If you're one of those political junkie types who can't get enough of the redistricting debate, you simply must tune into this weekend's edition of Power&Politics on News12. The show airs Saturdays AND Sundays at 10am and 3pm.

Labor gets behind Congressman Pascrell

Today 21 union locals announced support for Congressman Bill Pascrell in his primary fight.  Bill Mullen, President of the New Jersey State Building and Constructions Trade Council put it best: “Moving your home to challenge one of your own doesn’t make sense.  That’s why we’re standing by Congressman Bill Pascrell.”  And he is 100% right.  Bill Pascrell isn’t moving anywhere.  I can say with certainty that if he was drawn into a district with Scott Garrett he wouldn’t be running from the fight.  He would take it head on like he has every race in his career.

That is the most disappointing part of Rothman’s decision to move into Pascrell’s district.  There is a golden opportunity to take out one of the most extreme, ideologically driven members of Congress.  A man who wants to drill for oil on New Jersey’s shores, voted against reauthorizing the Voting Rights Act and refused to support funding for Hurricane Katrina victims.  Garrett refuses to compromise on anything and epitomizes everything that is wrong with Washington D.C. right now. Instead of taking this fight to Garrett – someone Rothman disagrees with on almost every issue – he is fighting his own, another progressive Democrat who he almost always agrees with.

It makes no sense.

It is no secret that I’m a strong Pascrell supporter.  Since my first race for the Haledon Board of Education right up until my election as the Mayor of Haledon he has been behind me.  Bill Pascrell didn’t start this fight.  But you can rest assured he is going to end it.

UPDATE: After this was posted I heard from Philip Swibinski of Team Rothman saying his candidate’s endorse list has grown since we published it , and that Team Pascrell’s claim of Bergen Freeholder David L. Ganz’ endorsement is not correct.

Congressman Bill Pascrell today released a list of Democrats endorsing him in the primary in the reconfigured 9th congressional district, which will pit two incumbent Democrats, Pascrell and Steve Rothman, against each other.

Rep. Bill Pascrell Endorsement List is after the fold.

It’s a long list, longer than Steve Rothman’s endorsement list, which was released almost immediately after he announced formally that he’s challenging Pascrell.

Jim Florio is on this list. And if current members of the NJ congressional delegation are staying officially neutral, former congressman Herb Klein is not. Klein’s home base, like Pascrell’s, is Passaic. He was elected to Congress from the 8th congressional district in 1992, and spent 4 years (1977-81) as Executive Director of the Passaic County Democratic Committee.

Pascrell’s list also dips into Council members, which Rothman’s did not – 28 are listed. Another category not represented on the list Rothman released Dec. 28 is Board of Education members; Pascrell lists 11 Dems among them supporting him.

A group of Latino elected leaders from Paterson declined to endorse either Democrat, citing the “respect and admiration” held for both men. That would have to be a disappointment to Pascrell; the city has a large Latino population. Paterson is the 9th’s base; Pascrell was born there, once served on the city’s Board of Education and the Board of Trustees of Passaic County Community College (main campus is in Paterson). He was mayor of Paterson for 7 years.

Rep. Bill Pascrell Endorsement List is after the fold.

“Eyes Up Here”: Look up north to see if NJ D’s are serious

A lot has been said, both here at Blue Jersey and in the traditional media, about the recent Congressional redistricting – and more specifically with an eye on the new Fifth and Ninth Districts.  Here in the Fifth, where I (still) live, the District is better in terms of the ability to beat radical right winger Scott Garrett, but the District is still a fairly Republican district.  Where things are very interesting in terms of just how serious the New Jersey Democratic Party is, not to mention the national Democratic Party, lies right here in Bergen County.

When Rep. Steve Rothman decided to run against Rep. Bill Pascrell in the Ninth as opposed to running against Garrett, my thought on the bigger picture is that there will be a lot of money spent on a Democratic Primary (assuming there is one) that could have been much better spent knocking down one of the worst Representatives in the truest sense of the word “representative” in that Garrett does not represent the best interest of most of his constituents.