One thing that’s very important to me is stopping the PennEast Pipeline. I will do anything I can as a Freeholder to stop this. And that includes laying down in the road. – Hunterdon Freeholder Candidate Paige Livingston Yeah, that’s…
Read more

Quote of the Day: Namesake Edition

“My son is a high-quality person and I applaud his transparency.“ – Donald J. Trump Hat/tip @JoshuaMZeitz on the meme

Quote of the Day: Resistance Edition

“I have not resigned but for personal reasons have had to take a step back from the campaign.” That’s Jim Murphy, Donald Trump’s national political director, as he stepped back from an active role in the campaign Thursday night. Now,…
Read more

Quote of the Day: Let your freak flag fly

QotD today comes from ACLU-NJ Legal Director Ed Barocas, reporting today’s news that a municipal court judge in West Long Branch dismissed charges against Joseph Hornick there. In March, Hornick was ticketed and told his wish to fly TRUMP flags on a flagpole on his…
Read more

Quote of the Day: Santorum aborts

Blue Jersey reader John Lee is hysterical. Because this: Rick Santorum has decided to end his presidential campaign but I think he should have been forced to carry it for the full term.

Quote of the Day to Dem political operative Mike Premo, alum of NJ and now chief of staff for Ohio Senate Dems. You’ll recognize the quote. “In future, if you’re wondering, ‘Crime. Boy. I dunno’ is when I decided to…
Read more

“Scott Walker’s campaign may be dead, but his anti-working family policies live on in the candidacy of Chris Christie. Like Walker, Governor Christie has staked his bid on reflexive hostility to hardworking public servants and wrongheaded opposition to pro-family policies like raising the minimum wage and paid sick days. NJ Working Families will continue to ‘tell it like it is’ about the mess the Walker-Christie model has made of New Jersey’s economy, until Christie joins Scott Walker on the losers bench.”

I’m intrigued by the idea that Scott Walker’s now-dead campaign lives on in some ghost-form imprinted on Chris Christie’s, particularly since Walker didn’t get what he wanted from the RGA when Christie ran it. Some nice symmetry to how much these guys have in common and how neither of them can shake the FAILstink of White House dreams nobody else shares.

Here’s Chris Christie, quoted this morning in the Philadelphia Inquirer, repeating something he’s said before on the radio:

“I also don’t think that we have this overwhelming need for affordable housing in the state, either.”

New Jersey is the fourth most expensive state in the nation for housing.

What does that mean? Define the Housing Wage as the hourly wage a family needs to earn – working 40 hours a week, 52 weeks a year – to be able to afford the rent and utilities for a safe, modest home in the private housing market. For New Jersey, that number is $24.92.

The actual mean wage for a New Jersey renter? That’s $16.34 an hour, below the housing wage for a modest, safe 2-bedroom. At that wage, an individual would have to work 61 hours a week to afford that 2-BR apartment at a fair market rent. Now how about at minimum wage? A minimum wage worker in NJ would have to put in 121 hours a week to afford that 2-BR at fair market rent. Stop now, and consider that that’s about 176,000 of Gov. Christie’s constituents.

The guy who doesn’t think we need affordable housing in NJ? He lives HERE: 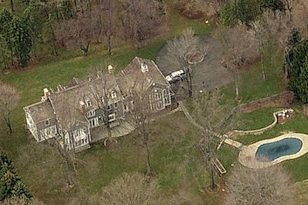 Quote of the Day goes to Gary Szatkowski, a meteorologist at the National Weather Service in Mt. Holly, 12:46am today:

You made a lot of tough decisions expecting us to get it right, and we didn't. Once again, I'm sorry.

Szatkowski also apologized via Twitter to “many key decision makers and so many members of the general public.”