TELL DCCC TO INVEST MOOLA IN CHO in NJ#05

30 SECONDS OF YOUR TIME CAN MAKE A HUGE DIFFERENCE FOR ROY CHO IN NJ05!

The Democratic Congressional Campaign Committee (DCCC) wants input about how they should invest money now through Election Day. ROY CHO is inching closer and closer to Scott Garrett.  We’ve got an answer for them:

Please take 30 seconds now to participate in the DCCC’s survey.

Fill in your name, etc.; and

Write your message below into the box that reads “Is there something else you think is more critical?”

something like:  Roy Cho Can Win!  Invest in New Jersey’s 5th CD NOW!

Major thanks for your help!  If the thousands of supporters receiving this email send our message to the DCCC it could make a big difference.

Please pass this email on to friends and family who may be interested and ask them to do the same! 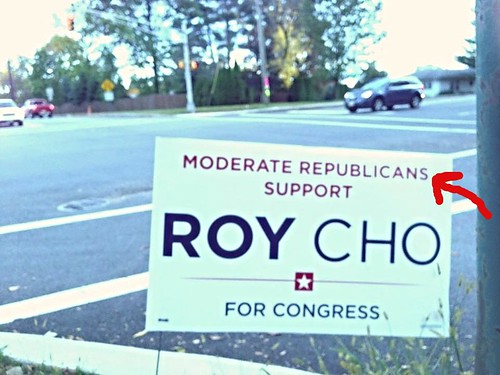 And so is this.

The Cho campaign is calling in their chits. They want, and deserve, a big supportive crowd tonight. A skittish Scott Garrett has declined to attend a candidate forum that Roy Cho will walk into with boffo national press, polling showing him hot on Garrett’s heels, and a formal request from his state party chair for merited DCCC resources. It’s a bad week to be Scott Garrett. Al Doblin’s even reminding voters that in 2008 the debate-phobic – and, uh, tone-deaf – Garrett sent a blind Jewish man to speak for him at a temple against opponent Dennis Shulman, a blind rabbi. Awkward.

If you’re an upstart Democrat running against an entrenched Republican, this lede is the stuff of your dreams. Philadelphia Inquirer:

WASHINGTON – Is an upset brewing in South Jersey?

They’re talking about the Stockton College poll – out late yesterday, and the momentum it shows for Bill Hughes Jr.. LoBo’s lead is down to just 6 points over Bill Hughes Jr. with 18% of respondents coming up undecided or not expressing a choice. Eighteen? That’s a lot of room for movement now that voters are starting to pay attention.

Hughes’ CM Keith Rosendahl calls last night’s Stockton numbers “the most encouraging poll numbers for a Democratic challenger to Congressman LoBiondo in over twenty years.” LoBiondo’s changed in his couple decades in Congress, Rosendahl argues, “walking in lockstep with partisan leaders in a broken and irresponsible Congress for too long.”

The question will be the degree to which voters will lump backbencher LoBiondo into the catch-all of their disgust with Republicans vs. the pull of incumbency to mindlessly return him for another 4 undistinguished years. Team Hughes has to feel good that Americans’ disapproval of congressional Republicans is at a dismal 72%.

Independent Funders Spending Big But Not So Much In NJ

With the possibility that Republicans might take over the U.S. Senate and with both parties trying to strengthen their margin in the House, money is flying around the country at electronic speeds and in quantities not seen before. The Huffington Post reports, “Super PACs are set to be a massive force in the 2014 midterms.” You can add to that monies expended by the national Democratic and Republican congressional and senatorial committees and other sources. However, the independent funders’ big money is not used to support every candidate.

In New Jersey where there are few competitive races, only Democrat Aimee Belgard (CD 3) has been a beneficiary so far. Two independent groups using their own funds have spent over $700,000 since August 1, 2014, in their ads and other media to oppose her challenger Republican Tom MacArthur. The Democratic Congressional Campaign Committee, headed by Rep. Steve Israel, has spent the largest amount, and the House Majority PAC (headed by Alixandria Lapp who used to work for the DCCC) also spent funds to to oppose MacArthur.

Belgard’s campaign committee has directly received $827,000 through June 30 of which $341,000 was in committee contributions that includes $10,000 from EMILY’s List. MacArthur has not had independent funders spending on his behalf, but he loaned $3 million to his own campaign.

It’s big money and lots more independent funds will be spent before the elections are over. However much more might not be spent on NJ elections unless specific races draw closer. Even Cory Booker who last year drew a lot money from independent funders is not doing so this year, but he had $3.5 million cash on hand as of June 30, 2014 and is expected to win.

This diary is not specifically about New Jersey, but with an anti-environment governor who kowtows to the pollution industry, it’s very relevant for the Democratic Party here.

I guess you could say I’m a dyed-in-the-wool Democrat. I’m an elected Democratic committeeperson and I honestly can’t find any Republican worthy of consideration for my vote. But when the Democrats deserve criticism, I’ll dish it out to them, too.

In their latest gimmick to harvest voter names and e-mails and to increase interest in this off-year election, the Democratic Congressional Campaign Committee is asking people to fill out pledge cards promising to vote in November. They hope to get one million people to fill out these cards. (Image of the cards is below the fold.)

For the first time in DCCC’s history, women have earned 60% of the coveted Red-to-Blue spots that bring extra benefits for Democratic House contenders – financial, communications, and strategic. But the biggest advantage is the stamp of viability that attracts money. Aimee Belgard, lawyer and BurlCo Freeholder since last year, was endorsed in the first round. Belgard:

“I am honored by the outpouring of support we’ve had here in the 3rd Congressional District. People from Burlington and Ocean Counties have joined our grassroots campaign to end the partisan gridlock in Washington, and stand up for our veterans, seniors and middle-class families,” said Aimee Belgard. “The strength of our campaign has earned us a spot in the Red to Blue program, and that means we’ll have the support and momentum it takes to win in November, and bring common sense solutions to Washington.”

The stakes are very high for serious House races, coming off of an era of the worst Congress ever and House Republicans refusal to govern or even act like grown-ups, change is required, whether it’s uphill climbing (Dems need to net 17 seats) or not.

Belgard’s campaign – endorsed by EMILY’s List last month – was already showing signs of strength last year when Rep. Jon Runyan announced he wouldn’t seek re-election. Runyan, though the kind of big hunky handsome that can help you get elected, was never intellectually prepared to serve the same House as Rep. Rush Holt (though he fit in fine with Boehner). The fact that CD3 is now an open seat turns up the flame on the district and on Belgard.

DCCC’s list also recognizes three districts where Dems are in primary fights – CA31, IA01 & ME02. You have to figure the D-trip is watching NJ’s 12th for the next round of Red-to-Blue. (correction: Rosi writing with a head cold is dangerous. CD12’s not red so Red-to-Blue doesn’t apply). It’s now open too, with Rush Holt’s retirement at the end of his term. That’s 3 open seats in Jersey. In CD1, as things in South Jersey go, an anointing of Don Norcross is expected, which takes the representation of that CD out of the hands of the voters. In CD12, two women – Bonnie Watson Coleman and Linda Greenstein – are angling for frontrunner status, along with Upendra Chivukula.

Republicans Step Right Up To Run In CD3… Lots of them

Nothing brings people out of the woodwork to run for office like an open seat and the race to replace Jon Runyan in Congress from the 3rd District has many Republicans lining up for party support:

GOP leadership has heard from 17 candidates in Ocean County interested in taking the reins of the congressional seat set to be vacated by U.S. Rep. Jon Runyan. At least one of the individuals, Evesham Mayor Randy Brown, took their name out of the running as late as this week – leaving up to 16 candidates left.

Ocean County leadership interviewed eight candidates this week and is slated to review the remaining hopefuls sometime next week. Burlington officials, the other county that makes up CD 3, are said to have interviewed at least 10 people earlier this month.

This morning, Rep. Jon Runyan announced he would not seek re-election for his NJ-3 seat. This, after being hammered for weeks by the DCCC, which whatever else you may think about it, knows how to spot an opponent’s weakness.

Tuesday, the day Barbara Buono was defeated by an old boys network of deal-makers and personal opportunists, was the 141st anniversary of the first time Susan B. Anthony and other women voted for federal office. New Jersey has no women in its congressional delegation, and hasn’t for years. Meet Aimee Belgard.

So, I can promise you I’m 100% in the camp calling for attention and resources from the institutional Dems (and glad to see O’Malley coming for Buono). But this, from a DCCC email this week really struck me as tone deaf. Big, bold headline:

DCCC sees Runyan as a weak link in the NJ GOP delegation, and they’re right to. And there’s nothing wrong with telling people Runyan should be called out for his party’s reckless behavior.

But what the hell is a “paid grassroots effort”?

A grassroots movement (often referenced in the context of a political movement) is one driven by the politics of a community. The term implies that the creation of the movement and the group supporting it are natural and spontaneous, highlighting the differences between this and a movement that is orchestrated by traditional power structures. Grassroots movements are often at the local level, as many volunteers in the community give their time to support the local party, which can lead to helping the national party.

Yeah. So, pretty much the exact opposite of what the D-trip is doing, which turns out not only not remotely ‘grassroots’ but probably not even humanoid. These are robo-calls!

D-trip, love ya. Mean it. But please catch up.

Why I’ll Never Give To DCCC

They hate New Jersey.  They don’t hate the dollars they collect from New Jersey, but that don’t give a flying f__k about the state when it comes to competing for seats.

We’ve seen it for years, the DCCC will dangle support for our candidates and beg us for money, then when push comes to shove they get a weak poll and they take our money and spend it in Nebraska.

They pulled that stunt with Upendra Chivukula in the 7th this year, giving him some weird, amorphous designation that got a little press and some donations, but never gave any support other than a database password.  Where’s the money, the boots, the radio spots for Upendra? Leonard Lance has betrayed his “moderate” roots, the only strength this milquetoast candidate has, and could be taken down with a good effort.  But the DCCC did as close to nothing as they could.

But even worse is what they did to Shelly Adler, buying ad time in the Philly market to support her effort to take back her husband’s seat from the ultimate empty football uniform Jon Runyan and then pulling the ads. New Jerseyans put a lot of effort into Adler’s campaign, and this betrayal is bigger than just dropping her — they dropped all of us.

And now Daily Kos has downgraded NJ3, as well.

NJ-03 (Lean R to Likely R) …  In recent weeks, the DCCC has cancelled all (or almost all) of the airtime it had reserved in the costly Philadelphia market that was earmarked for this seat, and the NRCC was only all too happy to follow suit. Without that outside help, this seat feels like an incredibly tough nut to crack.

Anyone in New Jersey who donates to the DCCC is donating to their own abandonment, to a figurative Lucy placing a football down in NJ3, NJ7 or wherever and then pulling it away time and time again.