Tonight, in New York City, Dallas, Baltimore, Washington DC., Boston, Minneapolis, Denver, Chicago, San Francisco,  Oakland there were massive protests, and streets and bridges shut down in protest of the grand jury decisions not to indict police officers involved in the deaths of #EricGarner in Staten Island and #MikeBrown in Ferguson.

You can debate the tactic, whether street action is the most effective agent of change. I would argue that when you see tens of thousands of people have seen something so awful happen that the must step out on the streets and raise their voices, something is going on, and they are demanding attention be paid. There are a lot of young people helping to drive this, and Twitter is among the ways word is spreading. Today, in recognition of Twitter’s role, this was painted onto a wall at Twitter HQ. @CoryBooker also used Twitter to call for federal investigation into Garner’s death.

Here is some of what happened in New Jersey today in response to the Mike Brown and Eric Garner no-indictment decisions:

Today, on the 59th anniversary of Rosa Parks’ act of civil disobedience, thousands of young people across the country are participating in #HandsUpWalkOut demonstrations, including in New Jersey.

In NYC, where the walkouts are going on in many locations, we hear from New York Civil Liberties Union (NYCLU) that a journalist has been arrested.

Protests are going on all over the country, including on college campuses. This was New Jersey City University a few minutes ago – photo credit to David Cruz at NJTV, @CruzNJTV: 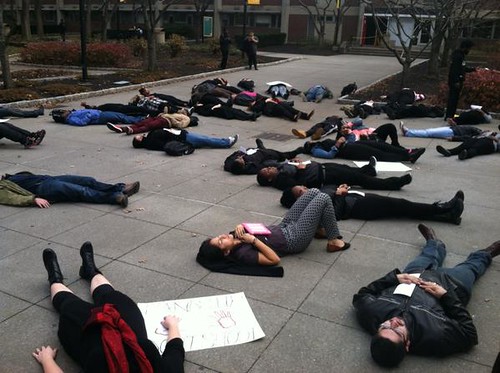 Meanwhile, the right-wing contempt of young people unsettled by what looks to them as no accountability for the killing of an unarmed black man continues. And so it goes …

UPDATE: The St. Louis Police Officers Association demanded these 5 St. Louis Rams players be disciplined and fined for their act of solidarity with Ferguson protesters on the field Sunday. But today, the NFL said no: “We respect and understand the concerns of all individuals who have expressed views on this tragic situation.” – Rosi

Kenny Britt is best known as a wide receiver who starred for the Rutgers football team, and lately as the same for the Saint Louis Rams.

Yesterday Britt and some teammates decided to use their fame and televised game to make a political statement about the shooting of unarmed teenager Michael Brown by police officer Darren Brown.

Wide receivers Tavon Austin and Kenny Britt came out together first, with the move obscured by a smoke machine in the upper reaches of the Edward Jones Dome. Stedman Bailey, Jared Cook and Chris Givens – all of whom are black – then came out and stood together with arms raised.

After Tre Mason scored on an 8-yard run to make it 45-0 in the fourth quarter, he and Britt raised their hands together.

The St. Louis Police Association has called for disciplinary action against the players for using their First Amendment rights.  I kind of hope the NFL does to keep the issue alive even longer.

Do we really see Martin Luther King this way? Or is there something more we should remember?

So, I’m sitting here. In a lobby. And somebody leaves USA Today on the table. Here is the cartoon at the top of the page, and I want to tell you why it pisses me off so severely: 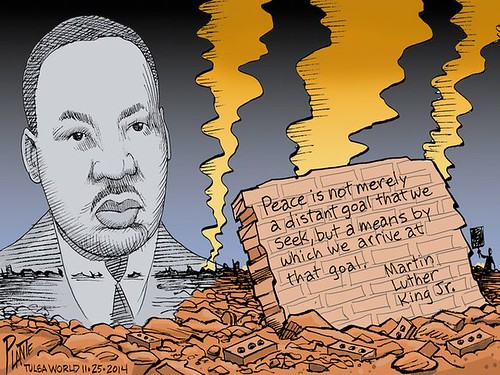 Do we really see Martin Luther King this way? Or is there something more we should remember?

So, I’m sitting here. In a lobby. And somebody leaves USA Today on the table. Here is the cartoon at the top of the page, and I want to tell you why it pisses me off so severely:

Ferguson – The Psychology of Riots and Poverty

The rare non-NJ-specific post. Because most of us were watching last night, and some of us may be attending gatherings today in Montclair, Cherry Hill, Newark, Princeton or elsewhere. Promoted by Rosi.

I've seen a lot of people decrying the rioting and looting behavior. While I agree – it's reprehensible, I also like to come at this from a psychological perspective. Some people – usually conservatives come at this with an eye towards compassion for the people whose property is being damaged and the horrible behavior of the rioters. Others come at this with an additional compassion for the rioters themselves. Conservatives are far more likely though to be “for” the police and good people who are being damaged. Why? 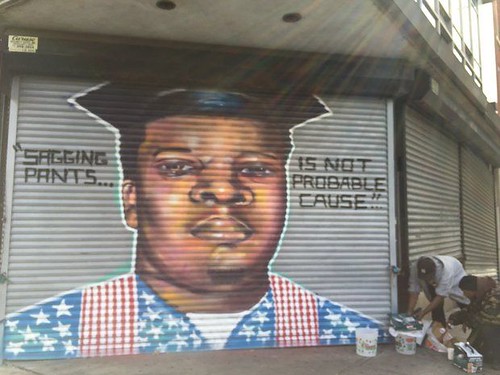 This mural of Ferguson’s Mike Brown, was painted over at police request.

A mural of Michael Brown, who was shot dead by a white police officer in Ferguson Missouri, has been painted over in Trenton at the request of local police. Artists from the Sage Coalition painted it two weeks ago. Artist Will “Kasso” Condry said he wanted the mural to start a conversation about racial profiling. I guess it did that, given that it didn’t last a month without Trenton police convincing the Trenton Downtown Association that it sent a negative message, and should come down.

The Sage Coalition is a known quantity in Trenton, and though I’m not a city resident, and might be missing something here, I find it hard to understand why the powers that be there didn’t trust their judgement. The mural was painted on a metal gate to a vacant store; covering up an illegal liquor store ad with art that people were talking about, that meant something to people. The Sage Coalition has a history in Trenton. Block parties during which they help people make and install art over the windows of vacant buildings, creative workshops conducted by local people for local people, gallery shows, live music, even turning vacant lots into community gardens, teaching people how to grow food and “bringing Trenton’s soil back to life.”

The Coalition is a 501(c)(3) non-profit, and one of its projects is a gallery owned by the Trenton Downtown Association – which made the ultimate decision to paint over the mural – but run by SAGE. So, I hope that this decision doesn’t damage that relationship.

A video of the mural being painted over like graffiti is below the fold. It was posted by artist Byron Marshall, who goes by Black Collar Biz. He told Trenton Times reporter Jenna Pizzi that the mural wasn’t about “us against you.” In the video, you can hear a man telling the graffiti blaster team he knows they’re just doing their job for their pay, but [the mural] aint causing any trouble. “Mike Brown. You can’t talk about that in Trenton.”

We’re going to say this qualifies as a New Jersey story because though he now teaches at Union Theological Seminary, Dr. Cornel West is a Princeton emeritus, the first African American to graduate from Princeton with a PhD in philosophy, and taught there for many years including time holding a professorship endowed in African American Studies by the Class of 1943.

And today, he was arrested in Ferguson, Missouri. Today is ‘Moral Monday’ in Ferguson, the culmination of 4 days of protest – ‘Ferguson October’ – two months after the shooting of unarmed Michael Brown by police officer Darren Wilson, who has not been charged. The activity on the streets includes many clergy engaged in acts of civil disobedience. Washington Post describes the centerpiece of today’s ‘Moral Monday’ as “waves of clergy crossing police lines and demanding to speak to Ferguson Police chief Tom Jackson.

It was in the first wave of clergy that West was arrested, as he expected to be. 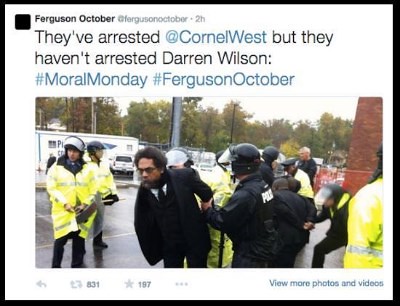 Another photo – below the fold.

For Sen. Shirley Turner to consider: ACLU guidelines for effective use of police body cameras

In the post-Ferguson world, legislatures are looking at ways to increase public trust in the police, increase the transparency and accountability of police conduct, and more accurately document police-public encounters, protecting the public against police misconduct, and helping protect police against false accusations of abuse.

And, to be frank, to clearly record and hopefully prevent  incidents like the one in Ferguson, Missouri where an unarmed teenager is shot and killed by police and differing accounts emerge. The thinking, by advocates, and by the makers of cameras already installed on many police dashboards across the country, is to get the story straight.

Senator Shirley Turner plas to propose legislation requiring police officers statewide to be equipped with body cameras. I think that’s an idea worth considering and I hope to see support from both Democrats and Republicans for this good government idea.

That said, I want to call to Sen. Turner’s attention, if she’s not already aware, that the American Civil Liberties Union (ACLU) has worked up some guidelines for how that should be done that I think are worth her considering. And that is particularly because they come from ACLU, which has a history of opposing undue government surveillance. That as a baseline, their support of police body-cams, make their policy suggestions valuable. These include guidelines for protecting the pubic against unreasonable invasion of privacy, preventing evidence from being edited to misguide how recordings should be used, and how long retained.

Here, in greater detail than I should summarize, are ACLU’s policy proposals for effective use of police body cams. I’ll be sending this to Sen. Turner’s office. I hope police chiefs and local municipal officials also give it a read.