Leadership at the top matters. President Obama preached tolerance and tried to unite America. However, there can be no doubt that Trump’s divisive “Make America Great Again,” “Mexicans are rapists,”  “America First” and anti-immigrant policies provide fuel for the Alt…
Read more

Piscataway vs. Free Speech: TAPE IN is TONIGHT

UPDATE: Piscataway only relented on their unenforceable ordinance hampering the public recording their public meetings when ACLU had to inform them of the law. They, and every municipality, need to be reminded they can’t interfere with the free speech rights…
Read more

Well, here’s the other shoe to fall in the developing story of Piscataway Council’s attempt to stop a resident from streaming a public council meeting using Facebook Live a few days ago; ACLU-NJ is informing Piscataway by letter to the…
Read more

When will these towns learn that there are limits to how much they can control the behavior of their residents?  There’s a Republican in West Long Branch, Joseph Hornick, who likes Donald Trump enough that he likes to fly not…
Read more

I have just learned of the death of the first woman ever to serve on New Jersey’s Supreme Court. Justice Marie L. Garibaldi died Friday at Hackensack Medical Center, where she served on the Board. Garibaldi was appointed to the…
Read more

“He’s a decent guitar player, but a vile human being.”

That’s about right. And that’s why a crowd showed up outside Ted Nugent’s show at the Wellmont Theater last night. They weren’t there for the guitar playing, but to protest Nugent’s nasty-ass view of the world and other people. The Wellmont didn’t cancel Nugent’s show, despite calls asking them to do just that. Disgust with his racist and otherwise bigoted statements has cost Nugent gigs, like the casino booking Nugent lost Monday. Nugent calls people who protest him “unclean vermin”. I say there were a lot of good people – better than him – outside the Wellmont last night. My friend Stacy Kay took this snapshots:

“You probably can’t use the term ‘toxic cunt’ in your magazine, but that’s what she is.”

But as of now, Nugent is scheduled to perform tonight at the Wellmont Theater right in the middle of one of NJ’s most progressive, most inclusive towns – Montclair. This despite months of calls to the theater to register upset, most of which went unanswered by the theater (their statement, here). Ticket sales were flagging last week.

So tonight, as Nugent takes the stage in Montclair, a lot of people who find his brand of racist, homophobic, sexist and violence-inciting commentary will be outside the Wellmont tonight:

Gather at the corner of Seymour & Bloomfield Ave.

Ted Nugent said, “Obama, he’s a piece of shit, and I told him to suck on my machine gun. Let’s hear it for him. And then I was in New York. I said, “Hey, Hillary, you might want to ride one of these into the sunset, you worthless bitch. Since I’m in California, how about[Senator] Barbara Boxer [D-CA], she might want to suck on my machine gun. And [Senator] Dianne Feinstein [D-CA], ride one of these you worthless whore. Any questions?”

A bunch of good souls, some of them friends of mine, are going to show up where this racist, sexist, gun-lovin’ character is appearing in New Jersey and exercise some American free speech rights. Want in? 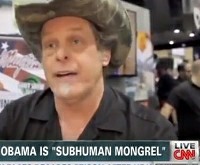 So Christie’s Director of Constituent Service says his ‘Town Halls’ are “private meetings on private property? (check ken’s link) What’s Christie so worried about that he has to control these ‘public’ ‘Town Halls’ so tightly? If Grossman does continue to make this point, it will be interesting to see if he gets any media attention for it. Promoted by Rosi

I don’t agree with GOP candidate for governor Seth Grossman very often, but on this issue he happens to be right. He has an interesting blogpost on his campaign website describing how he was nearly arrested for distributing literature at Christie’s campaign rally disguised as a Town Hall. He raises some important issues involving free speech and right of assembly. Keep in mind Steve Lonegan got himself arrested for doing the same thing at a Corzine Town Hall. and the charges were later dropped.

It will be interesting to see if Grossman seriously contests the restrictions on free speech at these campaign events. He is a lawyer and a former Atlantic County Freeholder, so he knows his way around.