The People’s State of the State: Be there

The “People’s State of the State” will be in Trenton Monday, January 14 at 11 am at the Statehouse Annex with advocates from across our state to elevate policies our communities are still waiting for in New Jersey. “We are calling…
Read more

Midterms: Our four freshmen got to first base, but we want some home runs

Above is the “class” photo” of the incoming House freshmen. There has undoubtedly been a blue wave. What happened in the USA was not Tsunami, but it was exactly that in New Jersey when we captured four of five new…
Read more

The Elephant in the Room

In one of several versions of a famous parable, “three blind men encounter an elephant for the first time and try to describe it, each touching a different part. “An elephant is like a snake,” says one, grasping the trunk….
Read more

3 Ways to Make Sure Your Vote Counts (Watch)

When we were worried NJ had no real place in the 2008 election: Ten years ago, John Bartlett, Blue Jersey alum Jeff Gardner & I decided we were tired of New Jersey’s presidential primary coming so late that essentially it didn’t…
Read more

Below are some links to Blue Jersey video I live-streamed today at Facebook, at the 2017 NJ Democratic State Conference at the Borgata in Atlantic City. I used an iPad for these. Unfortunately, Facebook won’t generate sound for videos you first post…
Read more

Feast or Famine: The Progressive Challenge for the 2016 Ballot and Beyond

Setting the Table: If a diverse set of advocacy groups all have their way, the November 2016 ballot will be as bountiful as a Thanksgiving table. There has been talk for months that anywhere from 2 to 6 ballot questions…
Read more

On Thursday the Assembly State and Local Government Committee is hearing the fast-tracked bill A-3628/S2412, a bill that deprives voters of their existing decision-making role regarding the control of our local water systems. This bill eliminates the existing democratic process that protects communities from the politically or profit motivated privatization of a water system.  This bill threatens not just the democratic process but the affordability and quality of water — a fundamental right for all.

The language of this bill justifies the privatization of water systems on the premise that many of them are in poor condition and could be better managed by private entities. That premise has no basis in reality. Empirical studies do not provide clear support for private entities providing superior water service – either in terms of costs or quality.

The assumption that private companies have the financial resources to improve water management systems negates the reality that profit based companies pass the costs of infrastructure on to users with less oversight, control and input from the public. If the municipalities do not have the money to invest in water systems, is the answer to sell it to the highest bidder, often a foreign owned company, or find the revenue to invest in a critical piece of public infrastructure? It may fill a budget gap one year but at the cost of control of our water. Is that worth it?

94 Years Ago Today, Women Got the Right to Vote in America

Hey, I just thought you should know that 94 years ago today, women got the right to vote. That happened when the Tennessee legislature approved the 19th Amendment to the U.S. Constitution; the last of 36 states to do it (NJ was the 29th).

It was a fight. 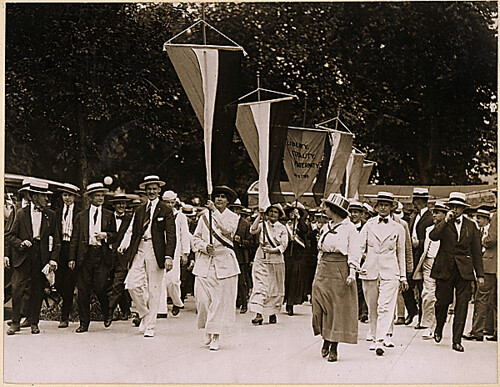 Julia Hurlbut of Morristown, New Jersey, leads 16 members of the National Womans Party picketing in front of the White House. July 14, 1917. They were all arrested, and sent to a Virginia workhouse because they refused to pay fines of $25 each. They were all pardoned 2 days later.

More history, and how New Jersey made women’s voting rights history, below.

There’s No Such Thing as an Off Year Election

Most Americans focus on the quadrennial Presidential election, and even there, only on the top of the ballot. By doing so, they abdicate their responsibilities as citizens and then bitch and moan about government.

Off-year elections and down-ballot positions are critically important – not just for the term of those being selected to serve, but also for years to come – especially in New Jersey where we elect our governor and legislature in odd-numbered years. Let’s take a look at past and future elections to see how they have an impact well beyond the terms of the winners.