Last night, seven men and one woman appeared in a panel to discuss their candidacy for an open seat on the Burlington County Board of Chosen Freeholders. On January 1, the winner of that seat, George Youngkin, was sworn in…
Read more

Watch the live stream of the Burlington County reorganization at 3:00 PM today on our Facebook page   Happy New Year to our readers. Today is the day for many reorganization meetings across the state where folks who were elected…
Read more

Promoted by Rosi.  I have debated posting some version of this for weeks.  I respect this community, Blue Jersey, very much and do not look to incite further discord given the ongoing debate between Sanders and Clinton supporters.  I have…
Read more

Karma has EVERY right to be a bitch to Jack Kelly. Do you remember Laurel Hester?

Parole Board? Why the fuss? If you’re new to New Jersey you might not realize why opposition is growing to Gov. Christie’s appointment of Freeholder Jack Kelly to the NJ Parole Board, a news item that normally wouldn’t get much notice. Maybe you…
Read more

Wherever a river bisects populated areas, adequate transportation between both banks is critical. Nowhere is this more evident than in the Christie administration’s failure to alleviate the congestion across the Hudson River into Manhattan. But Burlington County has its own, albeit smaller, crisis where the Rancocas Creek cuts across the county. 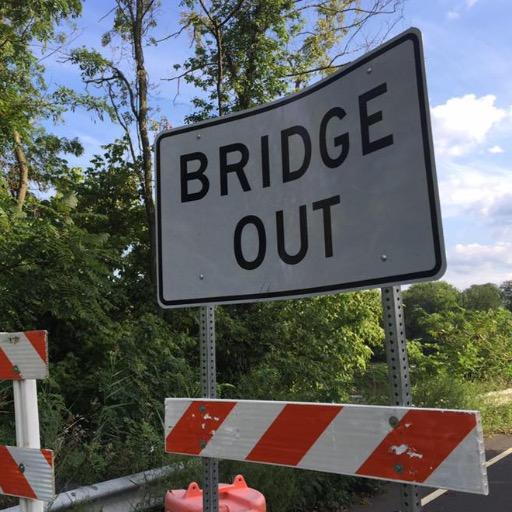 The Centerton Bridge, which was built in 1903, carried 14,000 vehicles per day across the river between Willingboro and Mount Laurel. Earlier this year, the bridge was abruptly closed when it was determined to be unsafe for vehicular traffic. Even before the closure, the bridge was inadequate, with one narrow lane in each direction making navigating through opposing traffic a test of driving skills.

Despite undergoing $6 million in repairs several years ago, the only viable alternative is to totally replace the bridge according to a report from the county engineer. The GOP-controlled Freeholder Board has made the tentative decision to simply allow the bridge to close and not replace it. They claim the stretch of I-295 that crosses the river a few miles down the road is adequate for the increased traffic.

As you will hear in the video (below the fold), a group of concerned citizens have criticized that decision. Many drivers are reluctant to drive on the high-speed interstate and negotiate the tricky exits and lane crossings designated as the detour for the Centerton Bridge.

This crumbling bridge is not the only one in New Jersey that needs attention. But there’s more to this. The community of Willingboro is heavily Democratic and has a large African-American population.  The freeholders or governor can garner very few Republican votes by providing Willingboro residents with easy access to the numerous destinations across the creek in Mount Laurel and Moorestown.

There has been a dispute in Warren County for the past few years, ever since they built a courtroom with a pillar that blocks the defense tables’ view of the jury and witness stand.

How can a defendant be afforded a fair trial if his lawyers are not allowed to see the witness stand, much less a jury?

It was a boner of a move by the county to pay for a courtroom that can’t be used, but these things happen.

There have been too many delays in an already crowded courthouse. It’s a very frustrating thing. Anyone who has made a similar mistake can sympathize, but the all-GOP freeholder board should have known better.

The rules were available to the county and to the architects they hired when they decided to build it anyway. They should admit their mistakes and rebuild. But no, here come the talking points: “It’s about taxpayer money!”

A state senate bill proposal would give the County the power to decide that denying a defendant’s right to full access to the courts is “suitable” solely because they don’t want to be responsible for raising the money to fix it.

As a registered Democrat, I don’t usually receive political mailings from the GOP. After all, they’re greedy and malevolent, but they’re not dumb. They know enough not to waste money sending their propaganda to someone who would not vote for them.

So I was surprised to see one of their political flyers show up in my mailbox. Here in Burlington County, we have five Republican Freeholders, and two of them are up for re-election this year. The flyer had the Orwellian headline, “Freeholders Cut Taxes & Spending, While Protecting Services.” I say Orwellian, because, like the Governor, they are using one-shot gimmicks to balance the current budget. 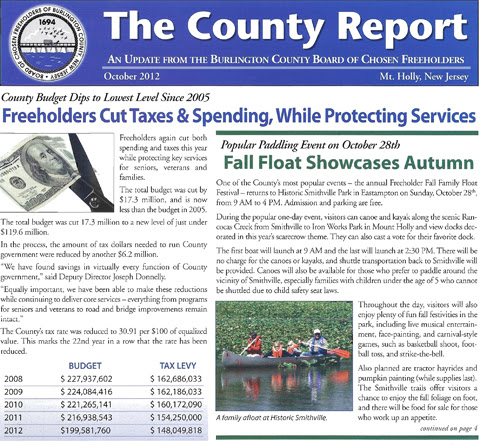 But upon closer examination, I saw that their political ad was not paid for by them, but rather by me. The flyer was an “official” communication from the Freeholder Board.

Now it’s legal and desirable for the Freeholders to communicate with their constituents on official county business. But this mailing, coming so close to Election Day, is ethically dubious. The Freeholders are sugar coating the problems with the Burlington County prosecutors’ remuneration, ignoring the ramifications of the sale of Buttonwood Hospital to for-profit entrepreneurs, and don’t mention the campaign contributions they received from the contractors who got $6 million in county contracts. I wasn’t going to vote for Republicans Garganio and O’Brien anyway, but this incident makes me more enthusiastic than ever to vote for Democrats Aimee Belgard and Joanne Schwartz.

Governor Christie is the master of using taxpayer money for political purposes with his so-called Town Hall meetings and his army of videographers and social media politicos. The Burlington County GOP has apparently learned from their master.

They Almost Got Away With It

Bergen Freeholders voted 4 to 2 to GUT the Pay to Play reform enacted just months ago.  Dems David Ganz and Joan Voss and Republicans John Mitchell and John Felice apparently don’t like running campaigns on IDEAS rather than ill gotten gains.

Fortunately, Current County Executive Kathleen Donovan, who was County Clerk during the infamous reign of Boss Joe, knows all too well why and exactly how Pay to Play money is bad for democracy.  She is STILL sweeping out the corruption from that era.

Using her pen – she vetoed the desperately conceived plan to resuscitate the Bosses of North Jersey within just one month of the election. This time, the would-be Boss is Republican Yudin who got an assist from Ferriero-crat and shameless coin huckster Freeholder David Ganz who penned the atrocious revised law like some modern political version of Renfield praying for the return of Boss Joe.

Thanks for the heads-up – – promoted by Rosi

I got this email from Bergen Grassroots.  I found it disturbing to say the least.

Tomorrow, Wednesday, Oct. 3, the Freeholders will meet in the Administrative Building in Hackensack, to consider repealing the pay-to-play reform we succeeded in getting enacted just nine months ago in December. This ordinance will be the subject of a public hearing and then considered for enactment by the Freeholders.

We must assume that the four Freeholders that voted to introduce this replacement legislation will now proceed to vote to enact it.This is a dreadful consequence for Bergen’s voters and taxpayers; the reform ordinance has been so successful that both parties can’t wait to repeal it. The meeting is scheduled to begin at 7:30pm and there is an immediate period when the public may speak on any topic. The ordinance’s public hearing will take place much later, at the end of the agenda. At that time, public input is limited to the subject of the ordinance.

We urge you to turn out for this Freeholder meeting to express your opposition to this action, which would restore “business as usual” for the Freeholders and their contractors.

Here is an article that came out this week in the South Bergenite about our run for Freeholder seats in Bergen County. Candidate Carol Skiba shares her view on the kind of job Ganz and McPherson are doing as freeholders.  Once again, the spokesperson for the BCDO has to speak for the Freeholders because they aren’t allowed to speak without running their talking points by Joe Ferriero.  Isn’t that so sad?

This article provides an excellent example of the slap-happy manner in which the Freeholder Board spends our hard-earned tax dollars.

NJ State Election reveals recently awarded contracts were given to campaign contributors who have consistently contributed to Boss Ferriero’s Bergen County Democratic Organization.  Donations, in turn, are regularly made by Boss Ferriero’s Organization to the freeholder campaigns.  This is a concise example of “money wheeling” and gives a strong appearance of being ethically challenged.  How do you look the other way and vote on these contracts?  How do you sort out the donations?

A Victory 2008 filing (freeholder campaign) indicates at least three recipients of contracts made campaign donations.  It is no wonder why Ferriero’s Freeholders are unwilling to enact more stringent pay-to-play regulations as allowed by State legislation.  Why are we permitting our tax dollars to be pick pocketed in this manner?

There are many problems with supporting this type of Democrat.  First, the more contracts awarded to campaign contributors (whether benefits are enjoyed directly or indirectly), the more funding is depleted, the more debt is incurred.  Funding that could be put to much better use by way of maintaining existing programs or creating new programs beneficial to the welfare and enrichment of our communities and its taxpaying residents.

Second, this type of Democrat is very far removed from what it means to be a “Democrat”.  Democrats work diligently for the silent majority and protect the weak, they stand up to do the right thing, and are not empire-builders for the County Boss.  It appears very clear these Ferriero Freeholders do not understand the hardships working families face daily trying to survive dire economic times.  Presenting an excessive budget with a bloated tax increase and incurring more debt is like giving ice in January to a homeowner who cannot afford to pay for heat.  These Freeholders must be held accountable.

Second, it is unbelievable when a Ferriero Freeholder cannot answer for their actions to the press and have to pass off reporters to a public relations person assumedly paid for by the Boss.  Hello — you are the elected official accountable to the voting public for your actions.  Silence on the part of Ferriero Freeholders speaks volumes louder than any lame attempt at justification.  After all, two of them lost their mayoral races, and that clearly indicates both Rutherford and Fair Lawn had a strong desire for change.

June 3rd, there is a choice for Democrats.  There are REAL BERGEN DEMOCRATS who want to restore their party integrity and values to those on which it was built; who want to work for the residents of Bergen County; who want transparent and honest government; who want to eliminate irresponsible spending,  and who do not want to kowtow to a Party Boss.

I trust my running mates to be able to speak on behalf of me as well as the taxpayers of Bergen County. These women I am running with all have brains which are connected to their speaking equipment. You know, so they can talk to the voters, and talk to the press.  You know.  Think on their feet.  Carol is a legal secretary, Aishaah is an attorney and Gail has spent years attending council meetings.  She knows firsthand how government should function and , like the rest of us, isn’t afraid to open her mouth to make her ideas known.

Boy, am I glad they are all on MY ticket!