Here is video of Chris Christie’s remarks about the passing of Frank Lautenberg, remarks made in his keynote speech at today’s Governor’s Conference for Women:

“But never was Senator Lautenberg to be underestimated – as an advocate for the causes he believed in, and as an adversary in the political world. I think the best way to describe Frank Lautenberg, and the way he would probably want to be described to all of you today, is as a fighter. Sen. Lautenberg fought for the things he believed in. Sometimes he just fought because he liked to.”

Governor Christie On Senator Lautenberg: I Give Him Praise On A Life Well Lived from Gov Chris Christie on Vimeo.

Senator Frank Lautenberg Has Died at 89

UPDATE from Rosi: Here is video of Chris Christie’s remarks on the death of Sen. Lautenberg. Herb Jackson is reporting that Senator Frank Lautenberg, who has been ill for months and was not standing for reelection in 2014, has passed away at 89.

He will be missed.

Frank Lautenberg was an essential progressive voice for New Jersey and for his country. A good man. A resilient man who emerged from cancer’s challenge to return to Congress and serve his country, as he served his country in war 60 years earlier. And when other Democrats failed to do so, a leader who challenged Chris Christie at the height of the governor’s popularity. The Senator who called Dick Cheney a “chickenhawk” also called Christie a liar, and spoke out against the governor  killing the ARC tunnel and with it Jersey jobs after Lautenberg had secured federal funding, Christie’s decision to tighten eligibility requirements in the state’s health care program, making things harder for poor people, and hisconsistently serving moneyed special interests over constituents.

And now it is Christie who will be in a position to name a successor to Lautenberg.

Senator Lautenberg died from complications of viral pneumonia at 4:02am this morning at New York-Presbyterian Hospital/Weill Cornell. He missed more than two months of votes in the Senate earlier this year, returning to the Senate floor in a wheelchair for the Democrats’ far-reaching gun safety legislation that fell short by six votes despite his effort to be there. He was cheered by Democrats and the gallery when he cast his Aye vote that day.

Lautenberg, who consistently throughout his congressional career was a strong progressive was the oldest member of the Senate when he died, and the last remaining World War II veteran still serving in the Senate.

Lautenberg’s Record of Accomplishment, compiled by his office. Full statement of the Lautenberg office is below the fold.

Late last week there was a US Senate Environment and Public Works Committee committee meeting scheduled to vote on the nomination of Gina McCarthy to be the head of the Environmental Protection Agency.

But Republicans decided they wanted to throw a wrench in the works, and refused to show up.  See, the committee can’t vote if there are no minority party members present — unless the majority party has 100 percent attendance.

And committee member Senator Frank Lautenberg was home sick in New Jersey and told not to travel by his physician.  At 89 and recovering from a bad bout of the flu, Lautenberg was experiencing weakness in his legs.

So the Republicans in the US Senate — occasionally considered the “sane” Republicans in DC — were willing to use Lautenberg’s health as a tool to block a perfectly qualified nominee to head the EPA.  Because … Benghazi?

And now that they’ve forced Lautenberg to travel for hours against doctor’s orders, they dropped the boycott.  They risked a man’s life to accomplish … nothing.

How do we make public health as sexy to media as terrorism? We all get mighty riled up when a couple of malcontents pack sharps into a pressure cooker at a famous sporting event. Completely understandable, particularly here on the east coast; that’s a fear we feel in our bones here, the way Boston feels it now.

But while America was glued to the Boston manhunt after the pressure cooker bombs, by comparison the media barely registered the town-leveling explosion in West, Texas – with much larger loss of life – ditto what the failures of its regulation signify for American workplace safety around chemicals, ditto the  fact that some members of the smaller-government faction that want federal dollars spent on the damage from what may be a company’s negligence, while displaced Sandy victims are beneath their concern.

Chemicals, and our everyday life with them, in our work, in our bodies, should be a sexy topic for the media. It’s not. Public health defenders should be hailed as rock stars. They’re not.

But that’s why I’m glad there are some grownups in Congress, though right now everything grownups do there seems like an uphill climb. Senators Lautenberg and Kirsten Gillibrand of NY got some decent news today from a report just released by the non-partisan U.S. Government Accountability Office (GAO). GAO’s report finds, essentially, that the EPA doesn’t have the ammunition it needs to protect us from toxic chemicals, because current law is flawed, which Lautenberg has said for a long time. Lautenberg and Gillibrand’s Safe Chemicals Act of 2013 would beef up the law and give EPA the tools it needs to collect health and safety information, screen chemicals for safety, and require risk management when chemicals cannot be proven safe.

We’re talking the stuff of your everyday life here – car seats, non-breakable plates for toddlers, detergents, your furniture, food packaging, electronics, vinyl products, non-stick cookware. What you’re touching, and breathing around right now. Testing by the CDC has found more than 212 industrial chemicals inside Americans’ bodies, including at least 6 known carcinogens and dozens linked to cancer, birth defects, other diseases.

Right now, EPA is severely limited in its ability to require safety testing for chemicals or limit harmful uses of toxic chemicals. They can require testing for only about 200 chemicals registered in the U.S. There are 84,000. Only 5 dangerous substances have been banned since the law was enacted – 37 years ago. In the chemical corridor that is New Jersey, that’s scary as hell.

Jason Collins was a bruising center who has played for a lot of teams, including the New Jersey Net’s when they were making conference finals and championship series.

Today he came out in Sports Illustrated as a gay man, doing so as a free agent with no contract but expecting to play next year.  That takes real guts.

I expect this will lead to more professional athletes, male and female, coming out in the next year or so.  The tide has been coming up the beach for a while, and it’s about to overtake the seawalls.

Also cool is that Senator Frank Lautenberg tweeted the following:

Jason Collins’s courage marks a historic moment in pro sports & the #LGBT movement that will empower countless others. #NBA

I hope that you will all put your comments in the section below. Today, Gov. Chris Christie’s in Dallas, Texas to pay homage to the worst president ever at his new Presidential Library. So let’s talk about Texas a little. Maybe Christie, who wants to be defined by Hurricane Sandy, can have a chat with 3 Texas fellas named Cruz, Cronyn and Flores. The might be at the Bush shindig, too. As ThinkProgress, points out:

Here’s what we get from the duly-elected from Texas: Senators Ted Cruz and John Cornyn, and Rep. Bill Flores want federal assistance for rebuilding West, Texas after 14 died and 160 were injured in the industrial accident there.

An avoidable disaster, in the Texas of lax zoning, and regulation-hating politicians. Flores voted for the 2011 House GOP budget, which would have reduced OSHA by $99M, and the Budget Control Act, decreasing funding for OSHA inspections. The plant hadn’t been OSHA inspected since 1985. Its risk plan listed no flammable chemicals. Department of Homeland Security (DHS) was in the dark about the risk.

So. Cruz, Cornyn & Flores all want help for Texas. Yet – surprise – all 3 voted against the Sandy Relief package to help us out. But

Here’s what we get from the duly-elected of NJ: Today, Sen. Frank Lautenberg introduced a bill that would require chemical plants and other facilities with dangerous chemicals to register with the DHS. Failure to do so would be a crime. Right now, Lautenberg calls current law “toothless,” with only a wrist-slap for facilities that don’t disclose. Here’s the heartbreak in the West, Texas explosion: Most of those who died were firefighters. Because the chemicals there weren’t disclosed, it’s unlikely first responders even knew they were rushing toward a massive quantity of unstable ammonium nitrate.

We’ve got plenty of chemical facilities in Jersey, too. We need this legislation to protect us, and the people who rush to help us, too.

Chris Smith (and some Democrats) Tear Apart the Constitution

Hurricane Sandy has been a disaster not only for the people who have lost their homes and jobs, but also for the rule of law. We’ve seen this in how Governor Christie has bypassed environmental regulations and ethical contracting in his quest for re-election. 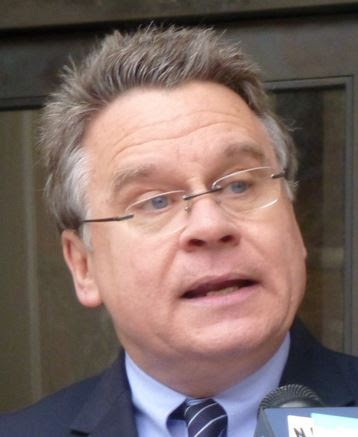 Now, New Jersey Congressman Chris Smith has joined that cadre of Sandy opportunists. He has introduced a bill (H.R. 592) that would erode the wall of separation between Church and State and would provide FEMA assistance to houses of worship that have suffered storm damage.

One of the greatest things about America is the separation of church and state. In my opinion, the tax exemption for religious institutions is bad enough, and is often abused. But direct government aid to churches, synagogues, and mosques is just plain wrong. Insurance, tithing, and fundraising should be how these houses of worship are rebuilt.

H.R. 592 passed overwhelmingly in the House, with an evenly split vote in New Jersey’s Democratic caucus (vote tally is below the fold). The bill now in the Senate Homeland Security & Governmental Affairs Committee

No doubt, if it is enacted into law, there will be expensive lawsuits challenging the bill’s constitutionality. And as Alfred Doblin of The Record points out, “I do not want my tax dollars to rebuild [the Westboro Baptist Church] if a tornado blows it away.”

If you believe that both church and state are strong because they are separate, call Senators Menendez and Lautenberg and urge them to vote against this government subsidy of religion if and when it reaches the Senate floor.

Blast from the Past

Bork’s recollection of his role in the Saturday Night Massacre that culminated in Cox’s firing is at the center of his slim memoir, “Saving Justice,” that is being published posthumously by Encounter Books. Bork died in December at age 85.

Bork writes that he didn’t know if Nixon actually, though mistakenly, believed he still had the political clout to get someone confirmed to the Supreme Court or was just trying to secure Bork’s continued loyalty as his administration crumbled in the Watergate scandal.

Naturally Bork’s reaction was to stay loyal to Nixon rather than resign. Bork truly was unfit for the Supreme Court. Frank Lautenberg was one of 58 senators to vote against Bork‘s appointment to the Court in 1987 — though by President Reagan. The senator can feel proud of that vote once again tonight.

This is the message Sen. Lautenberg sent to constituents and supporters about his decision not to run for re-election, and his plans for the next two years:

Last week, I returned to my hometown of Paterson to announce that I will not be running for reelection in 2014.

To protect children from toxic chemicals; and

To ensure that working families are not left behind.

Across the street from my speech, at the Paterson Museum, was an old silk loom. My father worked a similar machine as a millworker in factories across Paterson.

My father inspired me by fighting for the right to organize his fellow workers, to feed his family and help his children succeed.