In the U. S. elections last week Republicans took control of the U. S. Senate with 7 new seats and as of now have a lead of 52 to 46 with two undecided. In the House of Representatives Republicans, already in the majority, have gained 12 seats to lead 244 to 184 with 7 undecided. In gubernatorial races, where Christie spent so much time, Republicans gained net 3 seats with 2 still undecided.

In New Jersey we note in congressional races low Democratic turn out, an exciting victory in CD 12, heartbreak in CD 3 and 5, the winners all being those who raised the most money, independent funders spending big in CD 3 but not so much elsewhere, the departure of a highly respected congressman in CD 12, mixed quality of public polls, all incumbents winning, and the congressional delegation balance remaining unchanged at six R’s and six D’s. Both Public Questions passed. Voting by mail has increased from 10,000 in 2003 to 139,000 in the most recent report for 2013.

Also worth noting is the resurgence of county Democrats in Bergen, which has the state’s largest number of registered voters and whose Dem. Party Chair Lou Stellato is being wooed by potential gubernatorial candidates. Jim Tedesco (D) defeated long-time politician Kathe Donovan (R) to become the B. C. Executive. Current Freeholder Board Chair David Ganz (D) was re-elected as was Joan Voss (D), allowing the Board to remain in control of Democrats.

With a bulging bankroll and a win in the 2012 Special Election, no Dem (big or small) wanted to take on Cory Booker (D) in the Senate primary. A Republican called Jeff Bell, who loves the Gold Standard (ended in 1933) and had not resided in NJ the past 30 years, defeated someone called Richard Pezzullo by 5,000 votes to become the challenger. Bell has since returned to obscurity while Booker continues on as a celebrity. (997,000 to 763,000)

For brief comments on the 12 congressional races go below the fold.

In the Senate race incumbent Cory Booker (D) during the election cycle by October 15 had receipts of almost $18 million. His challenger Jeff Bell (R) raised $518,000. Today we have not only income inequality but electability inequality. In our federal elections only the financially endowed can succeed. Like a high stakes game of poker, even the better players don’t sit at the table if they can’t raise the money.

In the three races where Democratic challengers put up a strong fight but lost – CD 2, CD 3, and CD 5 – the Democrats were substantially out-funded by the Republican winners. By September 15 in CD 2 Incumbent Frank LoBiondo (R) had $1,018,417 and William Hughes (D) had $93,031. In CD 3 Aimee Belgard (D) had $368,115 and Tom MacArthur (R) who had loaned himself $5 million had $1,102,847. In CD 5 incumbent Scott Garrett (R) had $2,829,026 and Roy Cho (D) had $78,552. In three other races, CD 8, CD 9, and CD 10, where Democratic incumbents were dominant the Republican challengers by September 30 had submitted no financial reports presumably because their receipts did not exceed the $17,300 threshold. In every single Senatorial and Congressional race the candidate who raised the most won the contest.

The public polls by mid October and early November were correct in projecting who the winners would be. However there was a difference in the quality of their output. The State’s Unofficial List of Senate Election Returns indicate that in the race for U. S. Senate 1,793,173 votes were cast, out of the total state-wide registered voters of 5,492,702, so the turn out rate was 32.7%.

Not all polls are equally good but the prize definitely goes to Monmouth.

In the recent Senate Debate, Jeff Bell said the following:

Baby Center notes that between 30 and 50 percent of all fertilization — the creation of a zygote — are flushed out in the normal menstrual process before anyone knows they are pregnant.

Of known pregnancies, 20 percent are lost to miscarriage in the first three months.  That means that the best case between 36 and 60 percent of all zygotes are lost within 12 weeks of fertilization.

But why stop at fertilization?  Why not talk about sperm and eggs and say that they “grow up to be human beings.”

#NJSen: Man, Jeff Bell has some sad, bewildered ignoramuses behind his campaign. 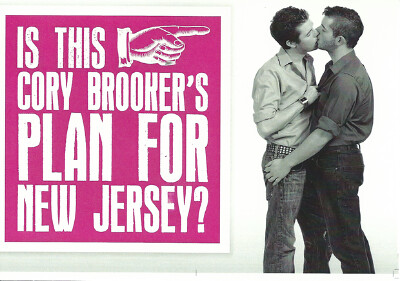 The sheer stupidity of this accounts for the fact you’ve probably already seen it; it’s heavily shared. I’m sure the Virginia-based, fake official-sounding group that put it out – Public Advocate of the United States – thinks that’s because it’s nasty-ass message (um, pun) is resonating with voters. And actually, it’s because people are laughing at these idjits.

Cory Booker’s name’s misspelled (which they now say is “intentional,” like we haven’t all seen the mighty-righty, pious Christianity-claiming, get-off-my-lawners display that kind of ignorance before). Them, and the professional, well-funded groups that encourage their fear of others, convincing them their free-floating anxieties, or even their real concerns are because of whatever despised “other” they can direct people to resent.

As Matt Friedman tells us, the other side of the mailer – so pink – says that Jeff Bell filled out their group’s survey, earning a “100% pro-family rating”. And they refer to Bell, who’s never been elected to anything, “Senator.” Booker, they say, gets a 0% Pro-Family rating because of his praise for homosexual ‘marriage’ and co-sponsoring the Gay Bill of Special Rights. As though that’s a thing.

Bell & Booker are currently engaged in their one-and-only-debate this cycle. But we just tweeted to the dude (who btw has only 752 followers) asking if he intends to denounce the ad, which is so obviously is on his behalf. Feel free to RT. 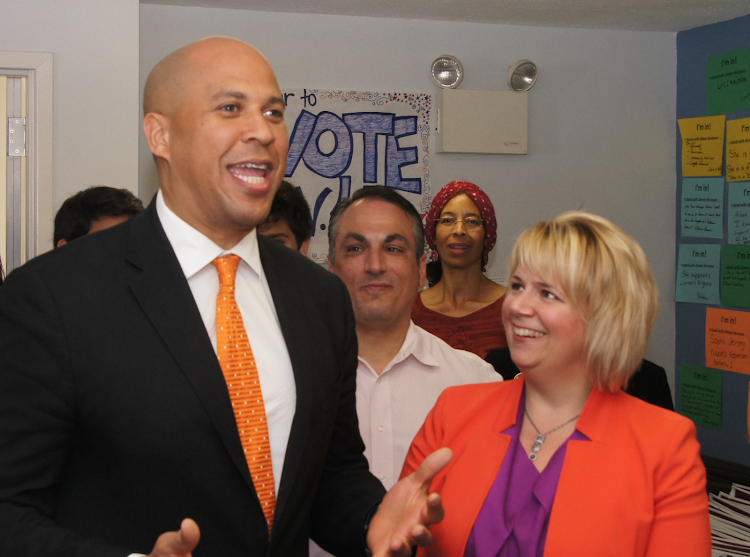 -Senator Cory Booker, referring to the fact that his opponent, Jeff Bell, has been a Washington lobbyist for the last thirty years and has only recently moved back to New Jersey. The remarks were made at a rally for Aimee Belgard, who is running for Congress in the Third District, also against a carpetbagger.

Jeff Bell's chances of beating Cory Booker have DOUBLED with a new poll. They're now 2%. http://t.co/QWZ3jGNznc

Familiar Booker themes of common ground, bi-partisanship and “it’s not about right or left” here. Though I guarantee some folks in Newark are going to take issue with his claim of supporting public schools …

As usual with Sen. Booker, a mix, delivered with such ease that it looks smooth, effortless and sincere. Decide for yourself. This is a 7-figure ad buy, across cable systems statewide. Unlike most campaign ads, it’s sourced; you can see that below the fold. What do you think, Blue Jersey?

On the jump page, backup to the script as provided by the campaign.

OK, who needs to register to vote?

National Voter Registration Day. Here are links to help you register somebody, or to update your own registration:

NJ Division of Elections – forms for each county, in English & Spanish.