This was the scene late this morning in West Long Branch as people gathered to protest LG Kim Guadagno’s egregious ad, using racist fear-mongering to alarm her Trump’s white-people base and get them to give a damn about her campaign, which they don’t…
Read more

promoted by Rosi Tuesday night was a tough pill to swallow — not a shocker, but shocking nonetheless, America elected the candidate who repeatedly espoused racist, misogynist and prejudice beliefs. A man who proclaimed his right to grab women by…
Read more

Trenton Earned Sick Leave Gets its Day in Court

Update: After three hours of argument, Judge Jacobson threw out the lawsuit, saying it had no merit.

A group of a few dozen supporters rallied outside the Mercer County Courthouse in Trenton. Here are some highlights.

There was a representative of the New Jersey Business & Industry Association observing the rally. He would only speak off the record, but he promised to send me the justification for their lawsuit that we can publish. If he does, I will post something in the comments to this diary.

My parents couldn’t earn sick days. Now I’m making sure everyone in New Jersey can.

Today, NJ Working Families director Analilia Mejia is being honored by President Obama for her leadership in advancing earned sick days laws in nine municipalities across New Jersey. You can watch the live stream of the ceremony here. Below are her thoughts on what this recognition means and the urgent need to ensure everyone in New Jersey has access to paid sick days:

In New Jersey, 1.2 million workers are unable to care for themselves or their family when illness strikes. This creates an impossible situation for the parent who faces a shortened paycheck and a sick child who should be cared for at home. It also hurts local economies, because every shortened paycheck means groceries left unpurchased. And it threatens our public health when a sick worker feels forced to come into work.

As a child, I often watched my parents make that impossible calculus: care for my sister and myself or make the mortgage payment that month. Take my grandfather to the doctor, and risk a smaller paycheck, or push an appointment back. This issue hits home for far too many in my home state of New Jersey. Medical care goes unsought and illness is spread unnecessarily.

All of this can be prevented with a simple policy that allows all workers to earn time they can take when the inevitable happens.

Another David vs. Goliath Battle

Suppose you are working a low-paying job and require 50 days off for cancer treatment. If you live in the United States, you’re in the only developed nation that does not require your employer to provide at least some paid sick leave.

Suppose you are a restaurant worker in Trenton and come down with the flu. If you take a few days off to recover, you won’t be paid, and if you’re not paid, you can’t feed your family. What choice do you have? Come into work and spread your germs, or let your kids go hungry.

Although 80% of Trenton’s workers already have some paid sick leave benefits, approximately 13,000 workers – mostly in low-paying jobs – are forced to make a decision on whether to work if they or their child is ill. In a classic David vs. Goliath confrontation, powerful business lobbyists are now trying to nullify the will of the voters.  A Superior Court judge is scheduled to hear arguments on April 16 as to whether this ordinance should go into effect or be postponed indefinitely.

Today, in Trenton, a coalition of groups held a rally and press conference to heighten awareness of this issue.

Next Tuesday, voters have big choices to make. There are a lot of great progressive candidates running in tight races. But if you live in Trenton or Montclair, the most important vote you can cast might just be at the bottom of your ballot. Local paid sick days laws are on the municipal ballots of both cities, and they could make a tremendous difference in the lives of over 20,000 workers within those communities — and eventually to over a million working families around the state.

It’s so easy to take something like access to paid sick days for granted if you have it. When you get sick, or your child gets sick, taking the time to care for them amounts to a minor inconvenience. But for people without paid sick days, each illness could mean either lost pay or a lost job.

These ballot initiatives would help keep the families, communities, and local economies of each town healthy by allowing everyone who works in the city to earn paid sick time they can use to care for themselves or their family members when illness strikes.

Here’s a headline – from ThinkProgress – currently bouncing around among advocates and activists like a ping-pong ball. It’s a huge compliment to the coalition working together this early autumn to midwife earned sick day legislation – following the breakthrough cities of Newark and Jersey City – through city after city by ordinance.

New Jersey is now the epicenter of the movement for earned sick leave, which will result in workers having time to recover properly, or care for a sick child, and protect co-workers and strangers from illness. To do the right thing for good health and have a chance to do it without worrying about losing a job.

This week something special is happening in New Jersey. Around the state, progressives are getting together for film screenings, parades, and panel discussions on hot topics of the day. It’s all part of the New Jersey Working Families Festival of Unexpected Ideas.

We’ve got a fantastic slate of events taking place from Thursday through Sunday. It’s everything from a film screening by journalist, filmmaker and immigration activist Jose Antonio Vargas to a community forum on Chris Christie’s disastrous attack on Newark’s public schools. 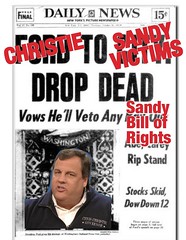 Most people following the Newark Mayor’s race heard last week’sbig newsthat one of Shavar Jeffries’ canvassers was arrested for allegedly starting a fire in the campaign bus of South Ward Councilman Ras Baraka.

The report was devastating — but it wasn’t even the worst news the Jeffries campaign had to grapple with last week. That honor goes to a new poll released by the Working Families Organization, which found Jeffries badly trailing Baraka, 28 to 51. More than that, the poll found Jeffries was losing support because he’s on the wrong side of one of the key issues of the mayoral race: protecting public education.