ICYMI, Watch: The Other PARCC

I’ve been in a flu fog for days, so somehow forgot to post this when it came out a few days ago. It’s local, it’s Jersey, and whether you have kids in NJ public schools or not, it’s worth your watching. It’s where your money’s going, in many cases it’s why your neighbors are aggravated.

Also read this slammin’ letter published both in the essential source for coverage of what’s happening to Newark schools, Bob Braun’s Ledger, and also in Huffington Post. It is titled PARCC is 30 Days of Destruction, and it’s signed by 35 teachers at Newark’s Science Park High School, consistently rated one of the top public schools in NJ and the nation.

This is what’s going on:

The Other PARCC – Parents Advocating Refusal on High-Stakes Testing from nLightn Media on Vimeo.

In Fair Lawn Christie’s show must go on

The 129th “Town Hall” this morning was polished but boring. Outside Mother Nature was teasing us with 45 degree weather but we still had to walk blocks through snow and slush under the watch of local police. No demonstrators protested outside, perhaps, believing their best efforts were in the courts. After going through security we entered the “theater in the round” – more accurately a basketball court. There was no high tech glitz projected on walls as in past events. Instead above the court were four banners with reproductions of pie charts and bar graphs from Gov. Christie’s budget warning us about debt and Pen/Ben problems. Some 300 attended – primarily the elderly and youth.

Fair Lawn is a town where in the last General Election Democrats Cory Booker and Roy Cho won their races and where all three state legislators are Democrats. You would not necessarily know that from the warm welcome Christie received as he strode in toward the center of the room. Fourteen video camera operators plus photographers leaped into action. A somewhat slimmer but still portly person, he exuded his usual confidence and spoke in a calm, reasonable-sounding way to the audience. His speech lasted about 25 minutes rehashing what he said in his budget address. He praised himself for reducing the size of government and promised no new taxes or even surprisingly user fees (a dubious promise.) Without him in Trenton he said there is no adult supervision, so presumably he will be providing little supervision in the future. He waxed on about what he did in 2011 to reduce Pen/Ben costs and launched the same arguments for his current Pen/Ben proposals. (“No other way to fix the problem.”) Nothing new here.

A Central NJ parent I know, has already written and sent a letter like this one. But she also asked her own children to write an essay to their principals explaining their own reasons why they didn’t want to participate in the tests. Her 7th-grader – Anna, 13 – concluded her essay with this: “PARCC is a waste of time for parents’ worried minds, students’ exhausted brains and teachers’ valuable time.” – Rosi

Readers, feel free to modify this letter to suit your needs.

We are writing to inform you that, as per our parental rights under the 14th Amendment to the US Constitution, we are refusing to allow our daughter, ————-, to sit for the PARCC PBA and EOY.

The selling of #CCRAP

In a previous post I compared the selling of PARCC to an as-seen-on-TV gizmo that promises to make your life perfect for only “3 easy payments of $19.95.” But unlike the Veg-O-Matic, frustrated, white suburban moms, and parents of all colors in all locales, have quickly discovered that the cost of the PARCC and its conjoined twin, CCSS, is anything but easy. They’re standing up and fighting back in droves. And that doesn’t sit well with the folks who market and sell this hokum. So, as Anthony Cody recently reported, somebody created an easy-to-use “How to Talk About Testing” ad campaign guide complete with a cute little bunny rabbit graphic and a classroom-friendly layout and fonts. I guess they figure if they treat parents like second graders, all will be well.

What We DON’T Know About the PARCC

One of the more annoying aspects of the current debate about PARCC — the new statewide, standardized tests coming to New Jersey and a dozen other states — is how the test’s advocates project such certainty in their claim that the PARCC is a superior test.

People are certainly entitled to their opinions, but let’s be clear: at this point, there is very little evidence to back up any assertions of the PARCC’s superiority. In truth, there is a great deal we don’t know about the PARCC:

New Jersey Legislators Need to Stand up for Our Children

UPDATE: Assemblyman Dan Benson, a sponsor of this bill, suggests we name the sponsors/co-sponsors of the bill, so people can know who to focus on – or who to thank for already supporting. Great idea: Assembly sponsors (A4165). Senate sponsor is Shirley Turner. Contact info for NJ Legislators is here.

The first administration of the experimental new PARCC high-stakes standardized tests is only weeks away and parents are increasingly concerned. Hundreds of families have notified their school districts that their children will not be taking the PARCC tests.

Approximately one-fifth of all New Jersey school districts have responded by assuring parents who refuse the test that their children will be provided with an alternative location, or at least the ability to read in class, while their classmates take the test.

Other districts, however, have taken a much more punitive approach, threatening to force children as young as eight to remain in the testing room with no other activities except sitting and staring for the two-week duration of the test.  Some districts have even threatened students whose parents refuse the test with disciplinary actions.

In response, parents are asking the New Jersey legislature to intervene and pass A4165/S2767. This legislation requires all districts and charter schools to provide consistent, humane treatment for children whose parents refuse standardized tests.

As growing numbers of legislators indicate their support for A4165/S2767, officials within the New Jersey Department of Education have apparently initiated a campaign to block its passage by claiming that the proposed legislation would cost districts precious dollars. Specifically, the NJDOE is arguing that the US Department of Education would use powers it has under the No Child Left Behind law to cut Title I funding for any schools that fall below 95 percent student participation levels on the PARCC.

12 questions every parent must ask about the #PARCC

Parents, print this out and bring it with you next time you meet with representatives from the NJ State Board of Education, the NJ DOE, or any administrator anywhere who tries to tell you this test is a magic bullet:

(1)  The reading level of some of the language arts test questions has been found to be several grades above the tested grade. How is a child who cannot read at that grade level and can’t understand the text or the test questions expected to complete the test? 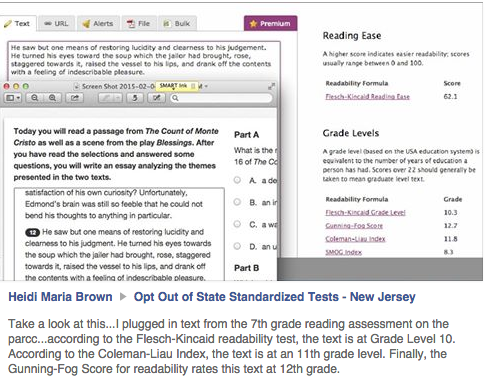 This week in NJ ed ‘reform’: The truth is out there

This was quite a week in the battle over public education in the Garden State: Gov. Christie’s testing study commission heard mountains of testimony from concerned parents and citizens in three different venues; educators continued to host parent Take the PARCC nights; NJEA released a bombshell new poll showing massive numbers of NJ parents oppose the test; and NJ101.5 capped several days of PARCC discussion with a debate over the test.

Here are my thoughts:

My daughter and I have a running joke: All the world’s problems can be solved for only 3 easy payments of $19.95. If we just went out and purchased every single as-seen-on-TV product, our lives would be perfect.

That’s what ed ‘reformers’ want us to believe about the PARCC test. Just like the PedEgg, the Bacon Bowl and the Uro Club, PARCC promises to magically transform your child’s entire life from dull to dazzling-with just 10 easy hours of testing! No more struggles with ‘bad’ teachers who lazily sit around waiting to collect their pensions. PARCC will send them packing. White suburban moms will magically accept that their kids really aren’t brilliant when they see those crappy test scores. But wait! Call now, and Pearson will upgrade your flunkie kid’s educational experience with all sorts of Common Core/PARCC aligned learning materials guaranteed to make them College and Career Ready! (Just pay the cost of cuts to arts and foreign language programs.) 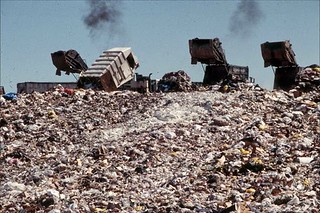 Our garbage dumps or the PARCC Test? Credit: NJ Spotlight

Four years ago I attended the very first Parents Across America meeting in New York City where I heard Diane Ravitch, Leonie Haimson, Karran Harper Royal, Andrea Merida, Rita Solnet, Julie Woestehoff, Mark Mishler and several other passionate and dedicated parents from all across the country speak about what was then a young but rapidly growing movement. At the time, Gov. Christie was at the height of teacher bashing, and many educators were wandering around like deer in the headlights. I remember Diane saying that ultimately nothing would change unless and until parents led the charge.

And she was right.

I expected it to happen over night. The destruction of public education was completely obvious not only to me, but rank-and-file education professionals all across the country, not to mention education researchers and scholars. Surely if parents could just see…

Ah, but change doesn’t happen in a New York minute even if you live right next door. Steering this suburban ship away from the rhetoric and privatization schemes of education ‘reform’ required a lot more than teacher voices.

It required parents to stop, look and listen:

“We know we can’t force any kid to put their hands on a keyboard.”