Roll Call published a Casualty List today for the 113th Congress, those members who for various reasons won’t be returning to Congress in January. They did some math and figure that’s 1,254 years of experience total that won’t be back. That’s a lot of incumbency, and the circumstances of the New Jersey four speak to how hard it is to overcome the campaign advantages of that incumbency, which include the powerful trappings of a federal seat, general goodwill towards local representatives (even where Congress itself is disparaged), and the freebie franking privilege which so many members of Congress use to send self-congratulatory mail that walks and talks like campaign lit but the taxpayers get the bill.

Of the NJ four leaving office, none were beaten by upstart challengers, to the eternal frustrations especially of those who rallied behind NJ-5’s Roy Cho (against the should-be vulnerable pre-Tea Party winger Scott Garrett) and NJ-3’s Aimee Belgard (whose fortunes rose then fell in the open seat Tom MacArthur bought for himself). All four new members – Sen. Cory Booker, Rep. Don Norcross and incoming House members Bonnie Watson Coleman and Tom MacArthur – take seats that were vacated by retirement, resignation or death.

Reflections on Transgender Day of Remembrance

Cross-posted with The Bilerico Project. Promoted by Rosi. 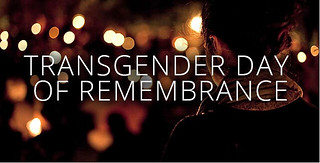 For the last dozen years as November 20th approaches, I tend to get particularly reflective and become aware of a depressive cloud that sometimes haunts me.

No, it’s not because it is my birthday and I’m another year older and not much wiser, but because it is Transgender Day of Remembrance (TDOR), and I will be speaking about the insidious crimes committed against people like me — just because we choose to be honest about our gender identity and want to live as ourselves in a culture, a society, a socio-political/religious environment that for whatever reason tolerates, condones, and promotes fear and hate. It’s a culture that wants us gone. 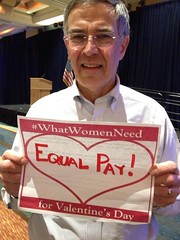 New Jersey’s scientist-congressman, who beat IBM supercomputer Watson at Jeopardy, and spent 8 terms in the House advocating better funding for scientific research for the public good, once said he wished Congress relied more on evidence than ideology to make decisions.

And now Rush Holt will go back to science, where evidence and discovery rule.

He announced this morning he will join the American Association for the Advancement of Science (AAAS), as its CEO and the executive publisher of its Science family of journals. Holt has both written for Science as a physicist before his election, and as physicist and science policy advocate after his election. Some samples are here but they’re behind a paywall. But Rep. Holt cross-posted one of his best-known Science op-eds at Blue Jersey, and you can read it here: Dueling Visions for Science (Science, 2001).

Here’s the way, AAAS describes its work and new leader:

The saga of the Keystone Kops like the Keystone Pipeline is one of unsuccessful, seemingly incompetent people repeatedly failing in a venture which in this case increases carbon emissions, could cause significant environmental damage and is still under study. For the ninth time the House voted on Friday to approve the Keystone XL Pipeline – 252 to 161.The roll call for our New Jersey Representatives was not what you might expect.

Republicans in the NJ delegation all voted YES to approve Keystone including Rep. Jon Runyan (R) who continues in office until January when his successor Tom MacArthur (R) is sworn in. Among the Democratic delegation the newly minted Don Norcross (replacing the already departed Rob Andrews) and Albio Sires also both voted YES. Donald Payne did not vote. The three remaining Democrats voted NO including Rush Holt who in January will be succeeded by Bonnie Watson Coleman (D).

Norcross said “I am proud to stand with members of both parties to support this project that can transform the American economy and put our nation back on the path of lasting growth.” As a candidate his platform supported “Job creation and Economic Development,” but did not mention energy policy. He calls himself an “Advocate for South Jersey,” but while the pipeline has national consequences its impact on South Jersey is considerably less significant. When he was sworn in he said he would “specifically like to serve on the House Committee of Energy and Commerce.” He might be welcomed by the Republican majority on the committee but his vote seems out of sync with his Democratic colleagues.

Rep. Albio Sires’ most recent website posting is a statement on Veterans Day, but there is no mention as to why he supported the pipeline. In fact in the past he supported an amendment to a bill (which did not pass) that would have required “a study of the vulnerabilities of the Keystone XL pipeline to a terrorist attack.”

As Roll Call points out, “the bill would still need 60-votes in the Democratic Senate before heading to President Barack Obama’s desk – a tall, but perhaps achievable order.” The House vote did not reach the veto-proof level. President Obama has never expressed support for the pipeline, but he has not said definitively that he will veto it.

TONIGHT in Princeton: A Conversation with Rush Holt

Where: Unitarian Universalist Congregation of Princeton

Rush Holt is my old boss; I’m a vet of his campaign staff. We lost Holt as our representative when Hunterdon was redistricted into CD7 and Leonard Lance territory; a distinct step down. But he’s still my hero. Here are 3 things I find encouraging about him:

1) He was always more interested in the word “representative” than in the word “congressman.” That is, more compelled by his responsibilities to those he represented than any title referring to himself as a member of Congress. If that sounds pretty Boy Scout of him, then that’s exactly it. He has been a straight arrow as long as I’ve known him.

2) Rush is a good-government crusader in the best of ways. A leader in all kinds of civil rights and civil liberties issues, which include voting rights, protecting civil liberties in the face of NSA spying, and the First Amendment.

3) Brains. Straight up. I remember when we launched the My Congressman IS a rocket scientist bumper sticker, and started getting requests for them not only from District and Jersey, but from college campuses and other places where education and science are prized. I’ve seen those stickers – in Rush Holt green, black and white – in several states. But if anyone gets the idea that Holt’s smarts are highfalutin’ or ivory tower-removed, get over it. The guy’s a 5-time Jeopardy winner, and the only dude I know of ever to beat IBM’s Watson supercomputer. But he’s far less interested in his own intelligence than in other people’s educational opportunities, and in what science research can make available to the world. 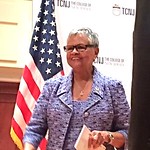 It was pouring rain last night on The College of New Jersey’s Ewing campus for the debate of CD12 combatants Dr. Alieta Eck and Assemblywoman Bonnie Watson Coleman. Hard to find the Mayo Concert Hall in the dark. Note to college: more lighting. And the parking lot wasn’t anywhere near it. Nevertheless, it was a packed house. And that was great. Made for many lively moments of engagement from the noisy audience of students and local politicos, to the frustration of the moderator.

This district, Rush Holt’s until January, is not competitive. Only late-breaking scandal or, you know, a massive comet will change the outcome. Bonnie Watson Coleman for the win. And that was reflected in the debate. Both women were confident and smooth in their delivery; they are both forces to be dealt with.

But Eck was overmatched. She really had nothing much beyond the old right-wing chestnuts. Obamacare is baaaad. Taxes baaaad. Trickle-down economics yay! That stuff might fly in some other, gerrymandered-for-GOP congressional district (though Roy Cho is testing that idea like a boss in CD5) but this is Rush Holt territory.

That said, it wasn’t the politicos in the room that drove the response, it was the students. From the start, Eck read the room wrong. Her opening statement was about herself, BWC’s was about the university and students, and a little of herself. Eck’s closing was off, too. While BWC closed making her best case of what she had to offer, Eck spent her time talking about her opponent.

Federal bills often become omnibus bills, worked out within and between the two parties, covering numerous funding sources, including amendments, and consisting of pieces that one side or the other side may not like but seem necessary to pass the bill. Hence, they are messy, not focused on a specific issue, and result in strange voting patterns.

In the Senate last week Joint Resolution 124 passed 78 votes to 22 with Senators Bob Menendez and Cory Booker voting YES. In the House it passed 319 to 108. Our most conservative Representative Scott Garrett and our most progressive Democrats Rush Holt, Frank Pallone and Donald Payne voted against it. (55 Democrats voted against it as did 53 Republicans.)

The bill provides “continuing FY2015 appropriations to federal agencies.” which in and of itself is not controversial. However, it also included extending the authority of the Export-Import Bank and the Internet Freedom Act, and funding for the Ebola virus effort, border security operations, and other agencies. Perhaps most controversially, it included an amendment to train and equip the Syrian opposition, which passed with less support 273 votes to 156.

In an ideal federal government you would not have such a jumble of issues in one bill, but in today’s world that is how Washington rolls. President Obama, referring particularly to the Syria amendment, called the bill “a hallmark of American foreign policy at its best.” He is expected to sign it.

Last week at the Texas border Secretary of Homeland Security Jeh Johnson said, “The message has to be that our border is not open to illegal immigration and we are sending people back … You will be sent back.” In contrast, the United Nations High Commissioner for Refugees produced a report Children on the Run that included a study “which concluded than 58% of the 404 fleeing children interviewed at the Mexican border were forcibly displaced because they suffered or faced harms that indicated a potential or actual need for international protection.” While the U. S. is urging countries to provide refuge for Syrians fleeing violence, it is taking a hypocritical and contrary position within its own borders. Homeland Security refers to these people as aliens and illegal immigrants, and on Wednesday, President Obama said, it was likely that most would be sent back to their countries.

However, Rep. Rush Holt has a different take on the matter. Last week while meeting with NJ immigration advocates including First Friends of NY/NJ, he stated, “They are refugees. That’s how we can start, by using the appropriate language.”

Below are suggestions as to how we can further help these frightened, endangered refugees arriving in New Jersey.

I’m going to miss this guy.