While Rush Holt served in Congress, and Andrew Zwicker is serving in the New Jersey Assembly, there are similarities between the men, and not just the mentor/protégé relationship that they had in both politics and as scientists at Princeton’s Plasma…
Read more

LD16 GOP incumbent Donna Simon concedes. Andrew Zwicker to be sworn in the first Democrat to serve the current 16th.

Apologies for the ‘Ruth Holt’ reference below, when I meant ‘Rush Holt’. Fixed. Damn autocorrect! A little while ago, Donna Simon called Andrew Zwicker and conceded. It’s official: Zwicker will become the first Democrat sworn in to represent the current…
Read more

Andrew Zwicker With scientist and educator Andrew Zwicker (D) up 29 votes at the polls Tuesday night, attention turns to counting provisional ballots in the 4 counties that make up the 16th Legislative District. Three of those counties – Somerset,…
Read more

A little more than a week ago, LD16 GOP incumbents Jack Ciattarelli and Donna Simon sent out a mail piece pandering to hard-core Republicans for whom the word “liberal” is a dirty word, and saddling their Democratic challengers with the POTUS and former Secretary…
Read more

So much of what I have always liked about Rush Holt was true – maybe even moreso – of his mother, Helen Holt. She died Sunday in Boca Raton of heart failure. She was 101, almost 102.

Back before I worked for him, Rush Holt used to tell a couple of stories about me at DFA events I’d organized. One was about when we first met him, pulling the car over on Main Street and leaping out at him with, “Are you a candidate?” when we spotted an unfamiliar blue suit with a clipboard. For him, the story was about how alert we were. For me, the best part was his answer, a sincere little speech about how he had the right to collect signatures out in public. From then on, Rush Holt’s earnestness was one of my favorite things.

I don’t come out as well in the other story, but that was fine with me. Because I was wrong, and he was right. Big-time. After Holt lost the 1996 CD12 primary (to Lambertville mayor Dave DelVecchio, who lost the general to GOP crooner Mike Pappas, who Rush beat in ’98), I was helping run a geographically-challenged leg race in LD23. Holt called me up to chat. We met on Route 31 in one of the Amwells, and talked in front of a WaWa that’s now a bank, leaning against my car sipping a coffee (me) and a tea (him). He told me he was going to run for Congress again, and win. I sighed. And told him he should really start lower on the food chain. Because after all, the House is shooting pretty high for somebody who’d never been elected ever.

The first time I met her was at the 1998 Mercer County Dem Convention, in some glorious old lecture hall. I went upstairs to the gallery, sat next to an elegant woman in a fussy blue suit. We chatted; she didn’t tell me her name. Carl Mayer was expected to walk away with the nomination; he spoke like a firebrand and spent his own millions. He spoke first. As Rush Holt climbed to the lectern, she whispered, “Watch this.”

Good Luck to Our New Members of Congress

New Jersey’ Progressive community is thrilled that Bonnie Watson Coleman will be sworn in as our first female African-American member of Congress on Tuesday. It takes an outstanding person to fill the seat vacated by Rush Holt, but Watson Coleman is up to the task.

But there’s another new Congressperson from the Garden State being sworn in this week. In the Third Congressional District, where I live, there’s a changing of the Republican guard. Jon Runyan, whose claim to fame was hitting big men on the NFL football field, is being replaced by Tom MacArthur, whose claim to fame is his purchase of a congressional seat with $5 million of his own money – a national record for a self-funded campaign.

One might be tempted to find a silver lining in all of this. After all, by self-funding his election, MacArthur is not beholden to the Burlington or Ocean County political machines. Indeed, the reason the North Jersey mayor received the nomination in the first place is his ability to fund the campaign himself.

But we should beware of false optimism. On the campaign trail, MacArthur’s positions were to the right of Runyan’s and in line with the Tea Party rhetoric that has stained the House of Representatives for the past decade.

Yet, like it or not, he is my Congressman. So I wish him luck and will give him the benefit of the doubt. At least for a nanosecond. If he works for us and does things right, like save the Joint Base, the region’s largest employer, from losing missions or being closed entirely, then I’ll give him the praise he deserves. But if he votes the way I fear he will – for the 1 percent at the expense of the rest of us –  he’ll hear from me, too.

Happy New Year, Mr. MacArthur. Even though your family still resides outside the district, I hope you’ll keep the best interests of all of your constituents in mind.

Tis the season for lists. So here goes. The brightest stars in 2014 include the well-known and the less well known. Some are newcomers and some have been with us for years. Some hold powerful jobs while others convey a powerful message.

Go below the fold to celebrate these people and read why they shine brightly.

Feel free to add your own stars. There are many more out there. 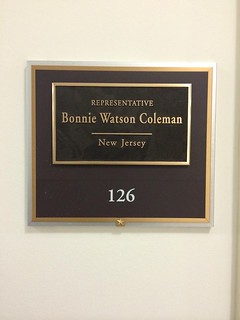 Another “hold your nose” vote to avert a government shutdown

Update Sun. 8:30 am: The Omnibus 2015 federal spending bill passed the Senate Saturday night 56 to 40 averting a government shutdown. Both Senators Menendez and Booker joined progressives and others and voted against the bill. Sen. Booker said the bill would roll back regulations in the Dodd-Frank Act, compromise truck safety, and interfere with the rights of Washington, D.C. residents to change their marijuana laws. Sen. Menendez said, “The rollback of critical Wall Street reform provisions puts taxpayers on the hook to bail Wall Street out again. Moreover, this last-minute add-on – a poison pill written by large financial institutions – sets the table for more attacks on the protections I fought to put in place following the financial collapse.”

Not so long ago the NJ legislature used to have an annual Christmas tree bill which was sprung upon the membership and laden with all sorts of holiday goodies inserted by individual legislators. This week in the House of Representatives with little more than two days to review the bill, leadership sprung their $1.1 trillion Christmas tree bill to fund the government next year and avert a federal shutdown.

The bill narrowly passed 219 votes to 206. Many Republicans did not like the bill for the generic reason that it calls for “too much government spending,” and because the act does not explicitly block President Barack Obama from implementing his Executive Order on immigration. Republicans voted 162 in favor and 67 against.  Many Democrats did not like the bill because it weakens Dodd-Frank consumer legislation and because it increases substantially the amount donors can contribute to political parties. Democrats voted 57 in favor and 139 against.

The House Speaker Republican John Boehner never had enough Republican votes to pass the bill, so he relied on support from Democrats. The White House vigorously lobbied Democrats for passage as did Steny Hoyer, Democratic Whip. Minority Leader Nancy Pelosi spoke out and voted against it. Five of our NJ Democrats refused to “hold their nose” and vote for it and instead voted against it.