For Christie, Bridgegate is not behind him

Gov. Christie last evening held a New Hampshire “Town Hall” at Fury’s Publick House which lived up to it’s name when Eileen Sahagian, a  former NJ resident, exclaimed to him, “When I heard about the Bridge Scandal, I was beyond horrified. It reminds me of feudal times … when the king would say, ‘Who cares about the peasants?'” … She was “worried about having a president who has people around him who think that’s OK.” Christie sidestepped the concern by saying “I played no role in the lane closure incident. If they could have gotten something on me, I suspect they would have.”

The question was not whether he played a role but about those around him. Christie has been trying to put the issue behind him. He said, “I am going to stop apologizing for it.” However, he will have difficulty achieving that goal. Investigations continue. The lives of people trail him – those who appeared recently in federal court and those who wittingly or unwittingly were involved.

So far there are only 3 federal indictments. There remains a substantial likelihood that Christie’s close confidante David Samson who once ruled questionably over the NY NJ Port Authority will be indicted. The PA itself has received subpoenas from  the NJ U. S. Attorney, County of NY District Attorney, Securities and Exchange Commission, NJ Select Committee on Investigations (NJSCI) and NJ State Ethics Commission (NJSEC). The NJSCI should want to delve further into whether state laws were broken and seek remedies. Although the NJ Acting Attorney General and NJSEC operate under the authority of the governor, they should also investigate and prosecute where necessary. Also there are civil suits.

For other individuals involved who may be “co-conspirators” go below the fold. 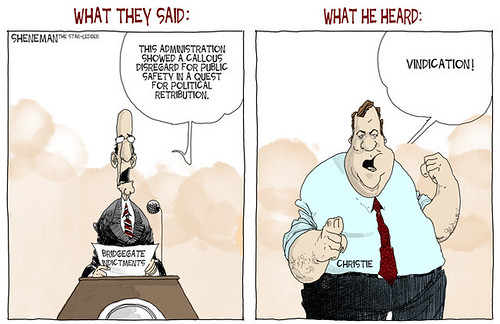 Jon Stewart On Bridgegate Indictments: “How the #@%& is that vindication?”

Thank you Jon Stewart for asking this very basic question. With one guilty plea and two indictments, how is it possible that the governor can even try to claim vindication:

Governor Christie is back in New Hampshire, the essential stomping grounds for Republican presidential hopefuls. The first presidential primary will be held here tentatively on January 26. According to P2016 from 2013 onward 20 Republicans have already spent 163 days in the state. Christie has spent nine days.

He is not faring well here. According to Real Clear Politics’ the most recent poll on the NH primary has Christie at 3% – ahead of only Santorum (2%.) Christie reached a recent high in March at 10%. As he would say, “It’s still early.”

His campaign here is managed by Matt Mowers who used to work in the now defunct Intergovernmental Affairs Office under then Deputy Chief of Staff Bridget Kelly. There are reports of Mowers meeting in early 2013 with Fort Lee Mayor Sokolich regarding a possible Christie reelection endorsement. Kelly called Mowers to inquire about the status of Sokolich’s potential endorsement before sending that email to David Wildstein. Prior to his current position he served as the Executive Director of the NH Republican State Committee.

Governor Christie is back in New Hampshire, the essential stomping grounds for Republican presidential hopefuls. The first presidential primary will be held here tentatively on January 26. According to P2016 from 2013 onward 20 Republicans have already spent 163 days in the state. Christie has spent nine days.

He is not faring well here. According to Real Clear Politics’ the most recent poll on the NH primary has Christie at 3% – ahead of only Santorum (2%.) Christie reached a recent high in March at 10%. As he would say, it’s still early in the cycle.

His campaign here is managed by Matt Mowers who used to work in the now defunct Intergovernmental Affairs Office under then Deputy Chief of Staff Bridget Kelly. There are reports of Mowers meeting in early 2013 with Fort Lee Mayor Sokolich regarding a possible Christie reelection endorsement. Kelly called Mowers to inquire about the status of Sokolich’s potential endorsement before sending that email to David Wildstein. Prior to his current position he served as the Executive Director of the NH Republican State Committee.

It is easy to get lost among the stampede and not receive much local press attention if a candidate is not in a high tier. Today’s Manchester’s Union Leader has only a brief mention: “Texas Gov. Rick Perry and N.J. Gov. Chris Christie are both in New Hampshire today and Friday as they consider launching campaigns for the Republican nomination.” A New Hampshire Channel 7 news article yesterday has three sentences mentioning his visit and noting, “Two of Christie’s former aides have been indicted and another has plead guilty to their involvement in the scandal.” Not exactly the type of news which helps a campaign.

One of his more interesting events in NH might be tomorrow when he is holding a “Town Hall” – his seemingly tried and true format, but one which has lost its glow in NJ. It will be in Dover at Fury’s Publick House – his first such event in an alcohol establishment. Will a few drinks bring out maudlin loving support, uninhibited opposition, and even fury? Stay tuned.

Yesterday, Bridget Kelly’s lawyer rejected as a lie David Wildstein’s story of GWB conspiring with Kelly and Bill Baroni. Then he promised he’d subpoena anybody to prove her innocent. That includes Gov. Christie. Today (in Mississippi), Christie said he would testify.

Our poll below pre-supposes if Christie says he knew nothing about scandal or the cover-up, that that’s a lie. Know what? His honesty on Bridgegate isn’t on solid ground with most New Jerseyans. He’s made cone jokes, denied any retribution against Sokolich for not endorsing him (Wildstein says Nope), made innocence noises for 2 hours to the press …

But none of that was under oath. So, that raises the question of whether New Jersey’s former top federal law man (super-parsing like a champ now) will actually lie under oath.

What do you think, Blue Jersey? Perjury? YES? NO?

Take our poll below:

In a NY Times story about whether the Governor’s grip on New Jersey Republicans is showing signs of slipping, they had this great line about the perception change Bridgegate has helped bring about:

Mr. Christie, who was first elected thanks in part to his profile as a clean-cut prosecutor, is now stuck parsing legalisms in an effort to play down his administration’s culpability in the events that led to the federal indictments last week.

Those here at Blue Jersey would take issue with the clean cut prosecutor profile, but that’s another story for another day. In this situation, the Governor’s people have tried to drop the bar so low that if in fact he wasn’t working the cones himself – did he think he was funny? – then it really has no impact on him. But in fact, the abuses of Bridgegate have helped to further undermine the foundation that was propping the Governor up all along. And no matter how hard Christie’s people try to spin it, parsing legalisms is not leadership.

So, Chris Christie is playing the exoneration card after his appointees and staff were indicted for Bridgegate, but he was not.  It’s a good thing he wasn’t under oath for this statement, though, since it’s a stretch at best:

“Today’s charges make clear that what I’ve said from day one is true, I had no knowledge or involvement in the planning or execution of this act,” Christie said in a statement.

“The moment I first learned of this unacceptable behavior I took action, firing staff believed to be accountable, calling for an outside investigation and agreeing to fully cooperate with all appropriate investigations, which I have done. Now 15 months later it is time to let the justice system do its job.”

The first part of the statement is a clear effort to put his culpability at September 11, 2013, focusing on “planning or execution” as opposed to knowing about it while it was happening (Wildstein claims he did) and completely dismissing it for the subsequent four months.  It’s carefully parsed to be 100 percent true and about 20 percent accurate.

But that brings us to the second part of the statement where he suggests he took action “the moment (he) first learned of this unacceptable behavior.”

But Democrats in the Assembly announced hearings in October, and held them in November.  They had already discovered a lot of information that there was something untoward, but this was Christie’s response on December 2.

“Just because John Wisniewski and Loretta Weinberg are obsessed with this… it just shows you they really have nothing to do,” Christie said.”

Much has been written in the past few days about Bridgegate – some of it more original, witty, insightful or boring. Here are a few picks for your weekend reading.

Add your own favorite articles. For a lively Blue Jersey discussion go here.

This is a sad day for our state. Unfortunately, it’s a day we expected would come. We learned over the last year that there was a lack of accountability at the authority and a culture of retribution within the governor’s office that created an environment where abuses could occur. The lane closings were a symptom of the culture that existed.

“Hearing the details of how the scheme was carried out was sickening.

“The crimes alleged to have taken place are serious and the kind of actions that erode public trust in government and public officials. The individuals charged today will have their day in court and those who abused their positions will be held accountable.

“I am glad that Mr. Wildstein took responsibility for his actions. That will help the residents of Fort Lee better understand what happened.

“I commend the US Attorney for his work. While the ongoing inquiry created obstacles for the joint committee, including preventing us from interviewing key players, we were careful not to interfere with or to obstruct the federal investigation.

“When we started our work on the joint committee, none of us could have imagined we’d be here today with the indictment of high-level public officials. We must finish the work to reform the Port Authority and get rid of the secrecy within the agency which allowed the employees to use the levers of government to advance their own interests.

“We must implement reforms that will ensure this kind of abuse of power never happens again.”

“These are serious charges that include the abuse of power and the betrayal of public trust. They should continue to be pursued thoroughly and those found to be responsible must be held accountable. Senate Majority Leader Weinberg, who was the first legislator to call attention to Bridgegate, and the Legislative Select Committee on Investigation deserve credit for exposing the wrongdoing, as does the U.S. Attorney for the professional manner in which he has been conducting his investigation. The legal process must now be allowed to do its job.”