A little more than a week ago, LD16 GOP incumbents Jack Ciattarelli and Donna Simon sent out a mail piece pandering to hard-core Republicans for whom the word “liberal” is a dirty word, and saddling their Democratic challengers with the POTUS and former Secretary…
Read more

Today, the Koch Brothers’ organization, Americans for Prosperity, released a 2014 scorecard of New Jersey legislators. AFP has a simplistic philosophy – government and taxes are bad. However, the real world is more nuanced than that, but it’s interesting to see how AFP rated some of our New Jersey legislators.

Governor Christie continues his unblemished record of preventing legislative overrides of his vetoes. He succeeded again on Monday by rallying his troops to defeat a bill that would have “required more detailed reporting by the state about the long-term impact of its soaring debt.” So reasonable and needed was this bill that the Assembly initially passed it unanimously. Christie’s victory, however, was not so sweet for him.

Of the Republican Sponsors of the bill, only one legislator stuck to his principles and voted Yes: Jay Webber.

Other Republicans waffled by abstaining or did not vote.

So only five Republicans voted to override, one Republican Sponsor had the guts to vote Yes, and most Republicans quietly abstained – not much enthusiasm from Christie’s troops. If this is a trend we may yet achieve an override before our governor disappears into the mist.

Asm. Ciattarelli to NJs 1%: Keep Calm and Count Your Money 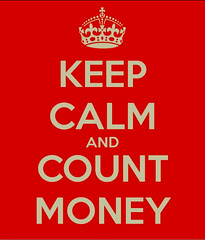 I’m sure the taxpayers of New Jersey’s 16th legislative district will rest comfortably tonight knowing that their Assemblyman, Republican Jack Ciattarelli, is looking out for their financial well being. I ran against Ciattarelli in 2011 and 2013, so I was particularly interested in this piece he wrote for the Star Ledger today about that oft-touted Christie phrase, ‘shared sacrifice’.

As a public school teacher, I’m well acquainted with Christie’s version of that lofty and noble goal; I’ve done quite a bit of it in the past 5 years as my paycheck has gotten smaller and my workload and the number of jobs I hold have gotten larger. Although this is not WWII England and Christie is no Winston Churchill, Ciattarelli is doing his best British government impersonation as he allays the fears of the 1%:

That’s right, folks. In the run up to the June 30 budget deadline, Ciattarelli wants to publicly ease any fears his super wealthy constituents may have about anything that may harm a single blade of grass on their perfectly manicured and gated lawns. He wants to make sure that the “mega-rich” (a word he never wants us to utter lest it suggest “that Republicans are ‘shielding a certain population'”, and they would never, ever do that, now would they?) are not fettered and stressed as they count their money and compound their interest. But you and me? Pshaw! We better just hunker down in our bomb shelters ’cause that blitzkrieg on the middle class and the poor ain’t lettin’ up any time soon.

(Hey, sorry for that run-on sentence in that last paragraph, but that’s what happens when I’ve been fed a steady diet of cow pie for 5 years.)

For the first four year Christie had his moment in the NJ sun: With Republican Assemblyman John Amodeo’s concession yesterday that he lost his 2nd District seat to Democrat Vince Mazzeo it is now official that the Democrats retained their 48 of 80 seats in the Assembly. Democrats also retained their 24 of 40 seats in the Senate. Gov. Christie won the gubernatorial election with 60% of the votes, and Democratic legislators won by capturing 60% of  the seats in each house. Governor Christie may think he has a mandate, but the Democratic legislators have every reason to assert that they have just as much of a mandate. With Christie casting his vision nationally, some of his flaws becoming increasingly apparent, and his support for Republican campaigning legislators almost nonexistent, now is the time for our Democratic legislators to step up their leadership. Christie has had his moment in the New Jersey sun, but his recent failed attempt to remove Republican Senate leader Tom Kean from his post, ongoing unrest from Sandy victims, the current contretempts with the Port Authority, his continuing poor performance regarding jobs and the economy all suggest his power may be starting to unravel and that his shtick is wearing thin on New Jerseyans.

On the Portfront: Deafening silence from Gov. Christie: During the recent legislative hearings it became apparent that Christie appointee to the NY/NJ Port Authority David Wildstein ordered the “aberrant” and “illegal” lane closures. Cedrick Fulton, Director, Tunnels, Bridges & Terminals, testified that Wildstein said he would notify the Port Authority Executive Director and Fort Lee officials about the matter, as routinely required. Christie Appointee Deputy Executive Director Bill Baroni testified he knew in advance about the action. Nonetheless, Executive Director Patrick Foye said neither individual informed him about the closures. Why did they fail to notify the ED and Fort Lee officials? It may have seemed humorous when Christie last week said, “I worked the cones actually,” but the results were chaotic and Christie was just trying to sidestep the reporter’s questions. It was his appointees  (Baroni and Wildstein) who caused the problem, hid it from others, and attempted to obfuscate the matter. In the meantime there is deafening silence from their boss Chris Christie. He bears responsibility for what happened. So what’s up Gov?

Call for President Obama to stop deportations: Eight protesters were arrested yesterday (International Human Rights Day) in a civil disobedience action in Elizabeth showing solidarity with detainees and their families. The U.S. has deported over 1.5 million people under the Obama administration and roughly 1,000 people continue to be scheduled for deportation each day. When will Republicans agree that protecting our borders is no more important than protecting human rights?

Gov. Christie: In Vermont to speak at the Republican Winter Gala fundraiser.

Why do legislators hold press conferences to promote bills that are not even available yet for people to read? Assemblyman Jack Ciattarelli (R-16) and Senator Chris Bateman (R-16) have done just that with a bill that seeks to overturn state law that protects health privacy and the patient-physician privilege. With this bill (A4380) any investigation of the possibility that someone, knowing he or she was HIV positive, had sex with another individual without informed consent, would be sufficient to permit prosecutors to obtain confidential medical records. Such is now permissible in New Jersey with a 1st degree charge, but these legislators wish to allow it with a lower level 3rd degree offense. Opening up medical records based on the suspicion of a crime sounds like a witch hunt that could do more harm than good to patient/physician confidentiality. Its primary result would be that patients with transmissable illnesses become more reluctant to seek medical care and thus more likely to transmit untreated illnesses.

Christie donors side-stepping pay-to-play: The N. Y. Times reports: “The Republican Governors Association has collected $1.65 million from New Jersey donors during the first six months of the year. The association has, in turn, poured $1.7 million into Mr. Christie’s re-election effort. A third of the $1.65 million the association raised in New Jersey came from people and businesses who had significant contracts with the state, or from utilities, which are prohibited from making any contributions to candidates for governor.”

Rep. Donald Payne, Jr. (D CD 10): “A complete and total outrage” – expressing his strong opposition on the House floor to the Republican proposal to cut the Supplemental Nutrition Assistance Program (SNAP) by $40 billion while “about 1 in 4 children who live right here in the United States go to sleep without adequate nutrition.”

Public Schedules (Your opportunity to jeer or cheer)

Email items for this column the evening before to BillOrr563@gmail.com

Because Equality Strengthens All of Us

I believe in equal rights, and I want to help get us there.

On the issue of marriage, I want you to know where I stand. And I want the people of the 16th Legislative District to know that I intend to represent all of them in the Assembly, not only the couples and families whose rights the state more fully recognizes.

In June, the U.S. Supreme Court Struck down DOMA and delivered a historic victory in the fight for equal rights for the LGBT community. Justice Anthony Kennedy, writing for the majority, said that DOMA wrote inequality into federal law. And that's a little like where we are now in New Jersey. Our civil union law, which was supposed to give same sex couples the same rights and protections as heterosexual couples, doesn't deliver. This week, oral arguments will be heard in Superior Court in Trenton challenging that law. Change is coming. And I'm dedicated to it.

The false arguments put up by marriage equality opponents are insulting to the intelligence and demeaning to the committed individuals who simply want the opportunity their straight friends have: to be happy with their loved one, and to raise their families in peace. This separate and unequal treatment must end.

Civil unions do not afford same sex couples the same rights and privileges as married couples. That must change, not only for them, but also for their children and families. And for the rest of us; equality strengthens all of us. Some of our politicians have confused their priorities. Instead of spending their time and energy – and public resources – standing in the way of some of our couples and families, our elected leaders should be working for New Jersey's economic recovery so people can afford to stay in their home, plan for retirement and have a good school to which they can send their kids.

While my GOP opponents, Assemblyman Jack Ciattarelli and Assemblywoman Donna Simon, voted against Marriage Equality, I will continue to stand with the true leaders in Trenton, and the people of LD16 and throughout New Jersey as we fight for equal rights for all of our state’s residents regardless of who they choose to love.