UPDATE: A few minutes ago, NJ Senate adjourned without posting SCR2.   This morning started with a prayer vigil with several faith leaders and more than 200 members of two unions whose members’ future will be deeply impacted by decisions of NJ…
Read more

Fixing NJ’s pension crisis: Do. Or do not. There is no try.

Last week dozens of NJEA members rallied outside the state house to protest the State Supreme Court’s ruling and Gov. Christie’s refusal to fully fund the pension system. The rally/lobby day (there are two more next week) was part of NJEA’s efforts to push the legislature to do something – anything – to stave off impending disaster when the fund runs dry in 12 years.

When the NJEA members drowned out the voice of Assemblyman Declan O’Scanlon, who was addressing a small group of Americans for Prosperity counter protesters, he responded with this:

“Do you want to yell at me or do you want to have a discussion? Because quite frankly, if we’re just going to yell, we’re not going to get anywhere.”

“This is the type of ignorance and screaming that gets us nowhere. … You have to make a real plan that’s sustainable so, long term, we can take care of our dedicated workers, make sure that the pensions are there, make sure that in two or three or five years from now, it doesn’t fall apart. Screaming, ‘just make the payment,’ doesn’t get me $2 billion.” (emphasis mine)

Look, I get it, no one wants an angry mob screaming and yelling at them, and when people are pushed, they kinda tend to push back. I’m not attacking Asm O’Scanlon. I have never met him, nor do I have extensive knowledge of his voting record and/or history with public employee unions. From his Twitter posts (more below), he seems like a reasonable guy who is willing to communicate with constituents in an open forum. His altercation with NJEA members is but a snapshot in the larger pension crisis picture.

I’m posting this today on behalf of our super-busy Jazzman, who posted it at his own excellent site yesterday afternoon. The breaking news is a few hours old. But the outrage still feels fresh. – Rosi

I think I’ll call Comcast later today and tell them I’m not paying my cable bill any more: I just can’t afford it. Same with Verizon and my cell phone. Oh, and my mortgage company, too.

I mean, why should I? Sure, I may have signed contracts with all of them, and I may have already used their services, but the NJ Supreme Court [yesterday] just confirmed that contracts in New Jersey don’t mean squat:

For best view, use either of the two greyscale options at the top of the page. The

Pen/Ben Court Hearing at 10:00 am AND Christie Introduces a Distraction

<<10:30 am The hearing webcast should be appearing here shortly in a Windows Media Player.>>

The N. J. Supreme Court will hear oral arguments today on the Pen/Ben case starting at about 10:00 am at the Hughes Justice Complex, 25 Market St., Trenton. Do not expect to find seating unless you have already reserved it. To watch online you can access the live webcast at njcourts.com starting at 10 am. Other outlets will also likely broadcast the hearings.

On the evening before the court’s hearing, which includes whether the State must make an additional payment of about $1.6 billion into the the pension fund by June 30, Gov. Christie’s office issued a statement. “Encouraging state revenues might provide another $200 million to pump into the public worker pension system this year.” The timing of this announcement seems quite convenient and not coincidental. It makes for a nice headline, but it will not distract the court from the merits of the case. The $200 million is only a small piece of what is due, and “might provide” does not mean “will provide.”

The statement is based on the Tax Collection Report of March 31, 2015 which indicates year to date collections at $18.4 billion are 5.3% above last year. That is good news. However, the report goes on to project revenue for the year at $32.6 billion (a 5.3% increase) which may or may not fully materialize. To achieve the projection revenue for the year, $14.2 billion would have to be collected in the last three months. Such is not impossible as amounts due on income tax are often not paid until April 15 or later. However, with such a large sum due in a few months, any projection is highly speculative.

In effect it is still too early to determine whether $200 million more will be available, and it’s irrelevant to main issue. The issue before the court is the constitutionality of the Pen/Ben law and what payment plan the State must follow. Good try, Governor Christie.

Remember the days when all Chris Christie got at “town halls” was adoring fans?

Here’s the scene outside Gov. Christie’s “town hall” the last hour in Old Bridge, NJ. We hear the protesters – who have paid sick leave and NJ honoring its pension obligations to its workers on their minds – have now been moved to a remote area of the parking lot.

Get ready, New Hampshire. The Christie Roadshow of BS is coming your way April 14. More photos on the jump page. 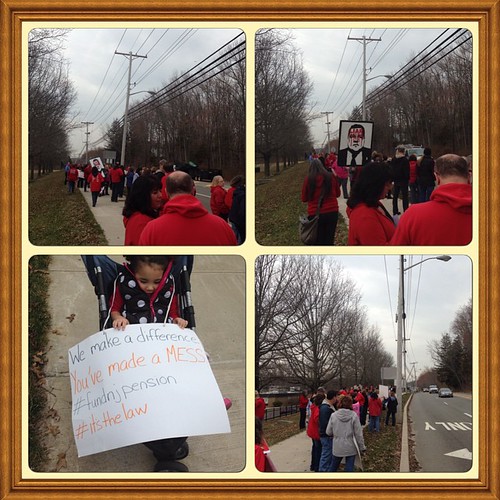 Yesterday, Bill Orr reported on the first of several public meetings of the Senate Budget Committee. This morning, its the Assembly’s turn, with the first of several meetings; this one being held in Collingswood. Prior to the start of the session, I spoke with Chairman Gary Schaer:

This is how Michael Drewniak, flack for Governor Christie, responded to a judge saying that the decision not to make pension payments for public workers was illegal.

“Once again liberal judicial activism rears its head with the court trying to replace its own judgment for the judgment of the people who were elected to make these decisions,” Christie spokesman Michael Drewniak said in a statement.

“This budget was passed by the legislature and signed by the governor with a pension payment,” he said. “