Chris Christie, bored with you New Jerseyans and restless after his vacay in the sun, is making a naked attempt to stay relevant on the national stage. Right now, he’s in Hickory, North Carolina at a rally with his dominant,…
Read more

Chris Christie, Father of the Year

Today, Gov. Chris Christie was named Father of the Year by something called the Father’s Day/Mother’s Day Council, Inc.. No, I never heard of them, either. According to their site, men named Fathers of the Year “embody the ideals of family, citizenship, charity, civility and responsibility”. Christie as role model. Let’s review – below the fold.

It seems that even Christie’s Acting Attorney General’s got his number. Acting AG John Hoffman just issued an order to cease photographing the governor’s critics at town halls “for security or any other purposes”. Or any other purposes? Team Christie wants you to think that after 4 years of town halls with little visible security, the sudden photographing of protesters by police dressed as civilians (or the ‘wanding’ is security-related. Funny how it all started as soon as critical mass was reached on Christie scandals, investigations of abuse of power and funds, and his failure to answer questions. As soon as those questions broke into his formerly tightly-controlled show-like events. Hoffman may or may not have Christie’s number. But he knows what won’t fly.

ACLU-NJ is concerned attendees “be able to express their viewpoints without having to fear police officers photographing them and creating political dossiers on them. And Sen. Loretta Weinberg calls it a “Nixonian tactic” that had the effect of an “act of political intimidation.” They’ve got Christie’s number, too. Here’s AG Hoffman’s statement:

“The State Police is responsible for the safety and security of the Governor and the public at town hall meetings. In doing so, the State Police are careful to guarantee that First Amendment rights are respected and the public – whether expressing positive or negative sentiments toward the Governor and his policies – have ample opportunity to make their positions known. That said, the Colonel and I have instructed the State Police to no longer photograph at these events for security or any other purposes.”

Christie’s next town hall is tomorrow morning in Flemington. Doors open at 9am. This is new. With Gov. Christie’s protesters no longer reliably staying outside his “town halls” he’s got the police snapping pictures of people who speak out against the governor – at a public event. This is a new level of intimidation.

PolitickerNJ reporter Matthew Arco is reporting that a main dressed in plainclothes who later identified himself as a member of the NJ State Police, was seen taking photos of protesters at this morning’s Christie “town hall” in South River:

Christie’s next “town hall” is:

More, plus video – below the fold. Photo is not via police, but tweeted by Tony Aiello, CBS New York.

Update: willlivingston wrote about this, too – and raises an excellent question about a leak and whether this may be Wildstein’s “evidence exists”. Read him.

In a few minutes, at 2pm, the New Jersey Legislative Select Committee on Investigation (NJ SCI) will meet in Trenton. Today, the NY Post is reporting that the SCI plans to look at the records of that state police chopper Gov. Christie likes to use, to see if he flew near Fort Lee during the time local lanes leading to the George Washington Bridge were closed.

If that’s true, it’s an amazing coda to an issue that absorbed us two years ago, the way Christie commandeered the state’s  $12.5 million state police helicopter – a 55-foot Homeland Security resource designed for emergencies and to transport critically injured people – for political and family reasons.

So, did Christie take a joy ride to check on his Port Authority minions’ work snarling traffic for the people of North Jersey? Did David Wildstein ride along? After all, right after Christie claimed to barely know who Wildstein is, a photo surfaced (via WSJ) of the two of them yukking it up on September 11th, 2013. During the 5-day lane closures, and on a day when more sensible people realize the busiest bridge in the world might be at a terrorism risk on the 9/11 anniversary. Requiring, you know, more care and safety, and less impeding of first responders, just in case somebody wants to do harm.

Whoever got the idea to check the chopper records for this is absolutely effing brilliant. And it tells me, if the story’s true, that good and intelligent due diligence is going on down there. 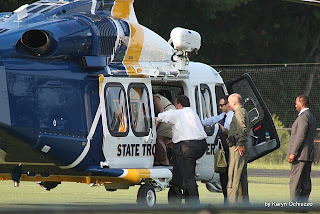 You are Paying for the Christie Re-Election Campaign

I’m not an election lawyer, but I suspect it’s illegal to use state resources for an election campaign. If it’s not illegal, it sure is unethical. But that’s the word to describe Chris Christie.

On yesterday’s NJTV newscast (start at 4:59), Christie used the State House venue for his re-election bid. Note the Christie campaign logo on the podium, not the official Seal of the Governor. He used the event to tout an endorsement (not a policy) by parading Reverend Jackson in the State House to promote ties to the education-industrial complex.

Christie is within his rights to use Reverend Jackson for his re-election. He has no right to do this in the State House or on any state property.

I guess the guy who uses a State Police helicopter to attend his kid’s baseball game has no problem using more of my money for his own self-promotion. But I’d love to see someone file an ethics complaint.