Vote By Mail – Easy instructions for college students & others

Today’s the 53rd anniversary of the Voting Rights Act (VRA), signed by President Lyndon Johnson August 6, 1965. It made illegal century old practices aimed at preventing black Americans from exercising their constitutional right to vote, per 15th Amendment. The…
Read more

BY DECIMINYAN When Congressman Rush Holt decided not to run for re-election in 2014, many progressives were disappointed. After all, a clear, progressive voice was disappearing from the House of Represenatives. But that disappointment was short-lived. Holt’s successor, Bonnie Watson…
Read more

BY DECIMINYAN At tonight’s League of Women Voters debate for the Burlington County Freeholders, the moderator asked each candidate whether or not they would support a resolution urging the U.S. Congress to strengthen the Voting Rights Act. One candidate, Kate…
Read more

Even though Senator Menendez has a relatively easy route to victory, he’s taking nothing for granted. Today, he’s criss-crossing the state, starting in South Jersey. I caught up with him this morning at a labor rally in Willingboro.

Lawsuit would be a waste of money for NJ Republicans

Update: And just as I post this rumors of a lawsuit surface. But the purported plaintiffs here are not Republicans, and they’re not racing to the courthouse to file their complaint. Anyone who is interested in the redistricting process and minority participation in politics should read the minority coalition’s letter to the state party chairmen, and not just the headline and three paragraph summary on PNJ. The political gatekeepers and party bosses in the state should read it as well. I’ll discuss the letter in a diary I post in the coming days on how the Voting Rights Act can regulate the election process even after the lines have been drawn.

When it comes to redistricting, the losers often sue. I’m surprised that we’ve heard relatively little so far from Republicans about a possible lawsuit. On Sunday, after the map was adopted, Jay Webber suggested that Republicans might sue to get the new legislative district map thrown out, but wasn’t very definitive about it. As of Monday, Governor Christie said that he had not yet heard of any Republicans planning to sue over the map. Perhaps Republicans are pessimistic about their prospects in litigation. Indeed, they should be, for even in the unlikely event that they win in court, they’re still likely to lose in November.

The weakness of potential Republican legal challenges to the new legislative map was highlighted on Sunday in the redistricting commissioners’ statements before the vote took place. Jay Webber claimed the map was unconstitutional because the 7th district was not contiguous. The crux of Webber’s argument? An uninhabited island, which everyone seems to think falls within the Township of Bordentown, but which Webber suggests might fall partly within Mansfield township. I have not seen any evidence supporting Webber’s assertion. Perhaps some exists somewhere. But, as I said before, everyone seems to think the island is in Bordentown Township. The Census Bureau, which released the maps that were used to do redistricting, thinks so. Bordentown Township, which collects over a quarter million dollars a year in property taxes on the island, thinks so. PSE&G, which pays most of those taxes, thinks so. Mansfield township apparently thinks so, too. Now, I know absolutely nothing about the law of municipal boundaries, and I haven’t seen any documents from the 19th century when these townships were created, but I’ve seen little to convince me that Webber’s argument was anything but a pathetically desperate last-ditch effort to sway Alan Rosenthal.

Last redistricting cycle, Republicans recruited a few black and Latino voters to serve as co-plaintiffs in a challenge under Section 2 of the Voting Rights Act, which I’ve discussed before here. Republicans argued that the Democratic plan, with its emphasis on “coalition” districts, spread black and Latino voters “‘into districts in which they constitute an ineffective minority of voters.'” A three-judge panel of the Federal District Court for New Jersey rejected the Republicans arguments and upheld the map. more…..

Race and Redistricting: What the Voting Rights Act means for New Jersey

The main reason so much of redistricting battle centers around race is that a federal law regulates how New Jersey can draw its legislative and congressional districts. That law is the Voting Rights Act of 1965, or the VRA for short. The VRA includes many sections and provisions, but the part that is relevant to New Jersey’s redistricting fight is Section 2. Section 2 prohibits discriminatory voting practices, including vote dilution. The leading Supreme Court case on Section 2, Thornburg v. Gingles, set out a three-part test to determine whether the method (usually a legislative district map of some kind) used by a state, county, or local government in electing representatives to a governing body dilutes minority votes:

1. Is the minority group sufficiently large such that a geographically compact, single-member minority-majority district is possible?

2. Is the minority group politically cohesive?

3. Does racial bloc voting by the white majority enable it to defeat the minority group’s preferred candidate?

Below the fold, I explore further the Gingles vote dilution standard and attempt to explain the impact Section 2 might have on redistricting at the state, county, and even local level in New Jersey. I make no normative arguments in this diary because I believe that, to understand the debate surrounding redistricting, it is important to understand the law governing it. The threat of litigation under the VRA affects line-drawing strategies of both Democrats and Republicans in redistricting. Politicians, leaders of minority groups, pundits, tea partiers, and other interested parties also deploy the VRA as a rhetorical weapon in the battle over redistricting. In doing so, some may overstate or understate its power to serve their own political goals. But who actually has a bullet in the chamber, and who is merely making empty legal assertions? Follow me below the fold to find out.

What SCOTUS didn’t say about redistricting

Carroll and other Republicans are misinterpreting the Court’s decision in Bartlett v. Strickland. The decision narrows the scope of Section 2 of the Voting Rights Act, which prohibits electoral practices that prevent minority groups from electing reprentatives of their choice. An earlier Supreme Court decision, Thornburg v. Gingles, held that only a minority population that is “sufficiently large and geographically compact to constitute a majority in a single-member district” can claim that a redistricting plan dilutes its votes and therefore violates section 2. The decision in Bartlett v. Strickland clarifies this requirement, so that a specific minority group (normally blacks or Hispanics) must constitute 50% of the voting-age population in a proposed district to assert a claim of vote dilution under Section 2. Thus African-Americans in the proposed single-member “coalition” district based around Plainfield could not make a claim of vote dilution, but Hispanics in the proposed Newark district could. (note: populations for “proposed single-member districts” are half the population of an average legislative district, because each legislative district elects two representatives to the Assembly.)

Is It Dred Scott Garrett? 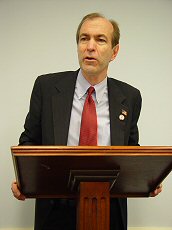 Extremist Rubber Stamp Radical Republican (Ernie) Scott Garrett just voted against the Voting Rights Act, one of 33 members out of 435, all conservative Republicans. He is the only member of the New Jersey delegation to vote against a bill that has protected the rights of millions of Americans to vote for four decades. In fact, Garrett is the ONLY MEMBER OF CONGRESS NORTH OF THE MASON-DIXON LINE TO VOTE AGAINST IT. All of the Republicans in New Hampshire, Connecticut, New York, New Jersey, and Pennsylvania voted for it except Scott Garrett. Garrett should run for Congress in Alabama, not New Jersey.

Does Scott Garrett support the 13th, 14th, and 15th amendments that end slavery, secure equal justice, and guarantee the right to vote? Would Scott Garrett support Brown v. Board of Education, or is segregation a good idea? Would he support Loving v. Virginia, or should a loving couple of mixed race be prevented from tying the knot?

Dred Scott Garrett is stuck in the 18th century. We need a 21st Century Representative who believes in what Harry Truman, John F. Kennedy, and Lyndon Johnson fought for –equal rights under the law!