Barbara Buono came to Netroots Nation in San Jose to extend her campaign to a national audience, and she did not disappoint anyone. Each year at this conference, there are a few candidates who become rock stars at the event. Last year that included Elizabeth Warren and Tammy Baldwin.  This year, it was Barbara Buono’s turn. After each appearance, the friendly audience of liberal bloggers and activists lined up to speak with her and have their picture taken.

She mingled with a crowd at a reception sponsored by Emily’s List, and gave a rousing speech (the best I’ve seen from her) at a candidate’s forum which included other progressive icons like Senator Jeff Merkley and Congressman Keith Ellison.

Earlier in the day, I met Buono at a café down the street from the Convention Center. Below is that interview. She talks about her mission at the conference, the special election, the budget, women’s issues, and the choosing of a candidate for Lieutenant Governor. Below the fold: some photos of her interactions with the Netroots crowd.

Each morning of Netroots Nation starts off with a daily news roundup (sound familiar?) featuring political strategists and pundits. Regulars include former Daily Show writer Lizz Winstead, Alaskan blogger Shannyn Moore, and stragegist Cliff Schecter. Today’s guest was Congressman Mike Honda, one of the more progressive House members, who is being challenged from the right in a primary.

After the session, I got a few comments from Schecter on the statewide races in New Jersey.

Howard Dean Gets #NN13 off to a Rousing Start 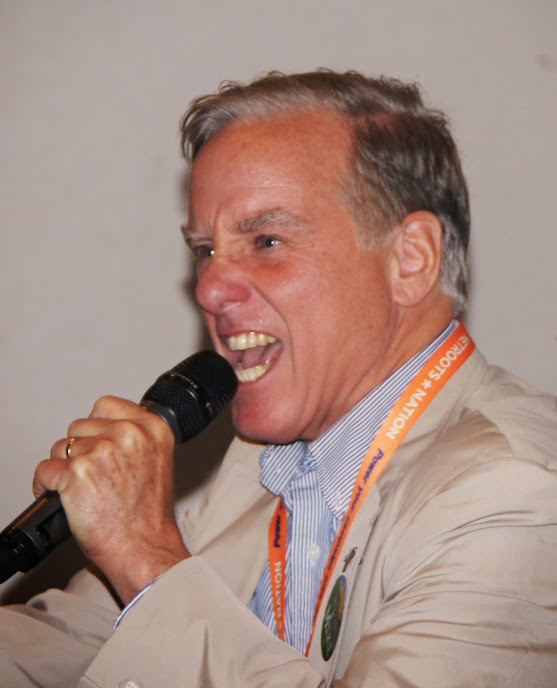 The annual conference of progressive bloggers and advocates held its opening party on Wednesday night. This year’s conference in San Jose is the biggest to date, and Blue Jersey is there.

At the opening party, Governor Howard Dean (right) excited the crowd with his message of grassroots activism and progressive ideals.  I spoke with him about the New Jersey gubernatorial election. He is a big fan of Barbara Buono and told me that she can win if she can get her message out to the voters. Buono will be here on Friday to participate in a candidate’s forum. Participants in the same forum last year included newly-elected Senators Elizabeth Warren from Massachusetts and Mazie Hirono of Hawaii.

I’ll be writing dispatches from the conference over the next few days. You can also follow Netroots Nation on Twitter at #NN13.