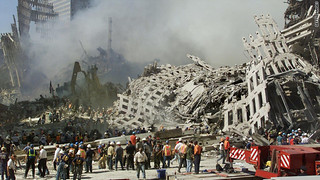 Pentagon refuses to clean up polluted base in New Jersey

The Washington Post is reporting that the Pentagon is resisting EPA orders to clean up McGuire Air Force base.

Although the law gives final say to EPA Administrator Stephen L. Johnson in cleanup disputes with other federal agencies, the Pentagon refuses to recognize that provision. Military officials wrote to the Justice Department last month to challenge EPA’s authority to issue the orders and asked the Office of Management and Budget to intervene.

Experts in environmental law said the Pentagon’s stand is unprecedented.

I view this is as yet another crisis caused by the Bush Administration’s belief in lawlessness — or more specifically, the belief that select individuals and organizations are above the law.

Not sure what to make of this, since it smacks of political manuvering, but this is big news and it should probably be the beginning of the end for out beleagured Defense Secretary, Donald Rumsfeld.

State Senator Thomas H. Kean Jr., the Republican nominee for United States Senate in New Jersey, says he is so frustrated with the Bush administration’s handling of the war in Iraq that he is pushing for something that few Republicans have supported: the resignation of Defense Secretary Donald H. Rumsfeld.

In an interview at his campaign headquarters late Friday, Mr. Kean said that he had become dissatisfied over the summer with what he said was Mr. Rumsfeld’s refusal to consider “competing points of view.”

But what compelled him to advocate publicly for a “fresh face” leading the troops, Mr. Kean said, were Mr. Rumsfeld’s recent remarks chiding critics of the war for “moral and intellectual confusion,” and comparing them to those who advocated appeasing Nazi Germany in the 1930’s.

Junior: “By engaging in that kind of rhetoric, this secretary has stepped over the line.”

Note to Junior:  How about calling out Rummy’s boss as well?

As Glassboro Airman Carl Ware Jr. was laid to rest yesterday, questions began swiriling about the exact nature of his death.

Airman Ware’s parents have suggested  the shot to the chest that killed their son in Iraq wasn’t fired by the enemy, rather by someone on his base, possibly a fellow soldier or security contractor.

Military officers in Hawaii (were Airman Ware was stationed) told the family they were investigating the shooting to try to determine if it was accidental or deliberate.

Officials at Hickam Air Force Base in Honolulu did not confirm or deny the familyâ€™s account other than to say his death did not happen in combat, and that it was being investigated.