The Grannies Peace Brigade is a group of patriotic grandmothers who attempted to enlist at the Times Square Recruiting Station in October 2005, in order to replace their grandchildren deployed in Iraq. They were denied entrance and in peaceful protest sat down at the site. They were arrested and sent to jail. They later had a six-day trial, at which they were acquitted of disorderly conduct. Since then, they have become icons of the peace movement.

Their message is clear:

“It is our patriotic duty to challenge government policy, where we think it’s wrong, even during the struggle against terrorism. In fact, the most patriotic action we
can take, especially at a time like this, is to protest government policies we believe are not in the best interests of our nation or of world peace, and promote better, more peaceful alternatives. We affirm that it is our patriotic duty to use peaceful, democratic means to shape our great nation’s policies toward building a world at peace while effectively fighting terrorism on a multilateral basis,”

Since the Grannies for Peace are hitting several spots statewide, I wanted to compile their Garden State schedule in one place here on Blue jersey.

Things kick off Sunday, June 25th in Newark.  Meet the Grannies at Broad and Market at 1pm.  Check out that link for some details. 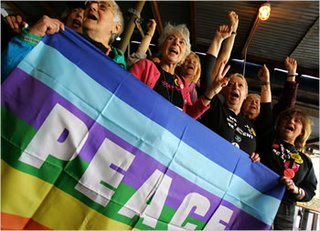 Just in case you haven’t heard about the Grannies, they gained recognition last year after they were arrested outside of the recruiting office in Times Square.  They were charged with disorderly conduct.  They were offered a plea bargain that included all charges being dropped in exchange for the Grannies’, whose ages range from 59 to 91, staying out of trouble for the next six months.  I am sure to the prosecutors chagrin, the grannies turned the deal down.  You might be wondering what their defense was.  They said they went to the recruiting station to enlist so their to spare their grandchildren from having to do so.  When they got there the door was locked and they being of advanced age became tired and needed to sit down.  They were acquitted.

This comes our way from New Jersey Peace Action…

Join the Grannies for Peace in a Rally and March

Please Join us for a Potluck Dinner with

The Grannies Peace Brigade is the group of 18 “grannies” who were swept up last October by the New York City police, handcuffed, loaded into police vans and jailed for four and a half hours.

The grandmothers were accused of blocking pedestrian traffic at the Times Square Army recruitment center in mid-town Manhattan after the women presented themselves for enlistment on October 17. They told army recruiters, “We insist/we enlist,” arguing that the military should take them into Iraq service rather than their grandchildren. They were acquitted on Thursday, April 27.

The women ranged in age from 59 to 91 and protest each week in Times Square against the war. Their campaign, arrest, and trial drew media attention from around the world. The Grannies celebrated their court victory by breaking into song outside the courthouse after the verdict, singing “God Help America” to the tune of “God Bless America.”

Asked what the judgeÃ‚’s decision meant to her, Grannies for Peace member, Joan Wile, 74, a retired singer, said, “Listen to your granny, and take to the streets like we did.”

This will be a potluck dinner, so please bring a dish to share, a dessert, or some drinks as you are able.

You can RSVP to: info@somersetpeace.org to let us know what you will bring and how many people are coming, which will help with our planning.

The first television ad of Senator Menendez’s campaign focuses on the most important issue facing our nation – the Iraq War. Even with the benefit of hindsight, the irrefutable revelations that the premise for war was built on fabrications, deception and lies, and the administration’s total incompetence and mismanagement of the effort, Tom Kean Jr has stated that he would still have voted for this war anyway.

That’s not being “independent” –  it’s falling in line with Bush and putting your party above all else – facts and reality be damned. There’s nothing “ethical” about sending the children of others to die for a war you know is based on lies and you know would be grossly mismanaged. That’s shamefully irresponsible judgement.

New Jersey rejects that kind of judgement, and Menendez’s new ad will remind voters that there is a clear contrast between himself and Tom Kean Jr’s support for the war and Bush’s reckless policies. Click below to view the ad.

Like Menendez, Senator Lautenberg says he will vote for both Senator Levin and Senator Kerry’s admendments. Herb Jackson has his Senate floor statement:

I have heard my colleagues on the other side of the aisle say that we would bring â€œdishonorâ€ to those who lost their lives if we begin to leave Iraq.

So why are we having so much trouble securing Iraq? The answer is clear: the Administration had no plan in place to do it. And when they tried, we saw mistep after mistep by the civilian leaders in the Pentagon.

And the leadership problems at the Pentagon start at the top.

Mr. President, our troops on the ground have not been well-served by the Secretary of Defense.

Some say â€œSend the troops homeâ€ â€“ but I believe our first order of business should be to send Secretary Rumsfeld home.

Menendez on Iraq: “Let us remember the lies.”

The US Senate is debating Iraq today and Senator Menendez announced that he will support the amendments introduced by both Senator Levin and Senator Kerry. Levin’s amendment calls for Bush to â€œbegin the phased redeployment of U.S. forces from Iraqâ€ while Kerry’s amendment is stronger, calling for our troops to be redeployed from Iraq by July of next year. Senator Menendez:

It is time for the U.S. to cap the open-ended commitment of U.S. forces in Iraq and to â€œremove the training wheelsâ€ on the Iraqi security forces.  The sooner the Iraqi security forces believe they are fighting for their country, the sooner they help stop the sectarian violence. Until that happens, the fledgling Iraqi government will continue to rely on U.S. forces to keep them from making the difficult decisions and taking tough actions. It is time for the Iraqis to step up to the plate.

And he reminds us why the Bush administration has absolutely no credibility when it comes to Iraq:

Let us remember that this was a war of choice, not a war of necessity.

Let us remember what this Administration has told us about this war.

The full text of Senator Menendez’s Senate speech is below.

Herb Jackson from The Record interviewed Congressman Bill Pascrell about his recent vote on the nonsense Iraq war resolution. He makes some incredibly honest and blunt statements about the war, the way in which we got into war, and how we should move forward, some of which I’ve excerpted below the fold (follow the link to read the whole thing).

It’s unfortunate it’s taken 3-4 years (not to mention billions of dollars and thousands of lives) for more and more of our Congressmen to speak up about these issues strongly like this, but it’s certainly better late than never. For those who felt they needed it, Jack Murtha has provided all the cover necessary. For some reason, some Democrats continue to hold out and divide the Democratic caucus on the issue. Democrats like our very own Congressman Andrews.

Yes, Andrews also took a step in the right direction by voting against the resolution, but on the floor he said this:

I could agree with that – if we had adults in charge of things. But everything they touch, they’ve proven their incompetence (the debt, the war, response to Katrina, the environment, energy policy, etc). Jon Stewart explained it something like this: When someone drives your car into a ditch, you don’t let them spin the wheels while your car gets deeper and deeper in the mud. You take the keys away and call in the grownups to try to salvage what you can.

Congressman Andrews: It’s irresponsible to trust this administration with the lives of our troops any longer. Take the keys away and bring them home safely. You want a plan? Jack Murtha has a plan with 101 sponsors, including every other Democratic Congressman from New Jersey. What are you waiting for?

Tosser of the Day: Charles Webster

The Trentonian is a pretty worthless rag. To be fair, it has come in handy to line the floor during oil changes and my wife sometimes uses it on the bottom of our guinea pig’s cage. But unless you’re a guinea pig, it’s not even worthy of being crapped on. State House reporter Charles Webster reminds us why:

Democrats in the State House are falling all over each other to get into law a bill that would ban protesters at the funerals of any soldier, sailor, airman or Marine who was killed in combat. These are the same Democrats protesting the war at every level.

It begs the question: Are the Democrats just worried these funeral protestors are weaseling in on their territory?

The only people protesting at these funerals are religious extremists who preach hate and rejoice in the deaths of our troops as God’s punishment for America being supposedly so gay-friendly. It seems like they might have a sympathizer in Mr Webster.

Most Democrats oppose the Iraq war and the countless senseless deaths it has caused. We weren’t fooled into this disaster, but Mr Charles Webster and his fellow 101st Fighting Keyboardists pound away at their desks mocking anyone who would dare question their brave willingness to send others to die for something they’re only willing to type about. No, wait…Atrios corrects me:

The willingness to send others off to die for a misguided war because you wet your pants after 9/11 is called “cowardice” not courage.

Right. Mr Webster, you pathetic, war-mongering whiner: you are today’s cowardly Tosser of the Day.

First off, a proper musical backdrop while contemplating the real costs of war. 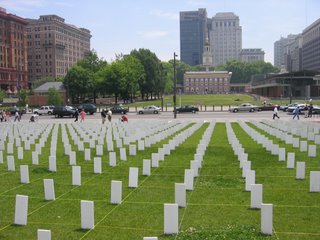 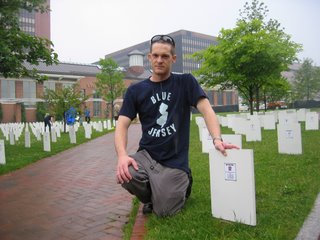 With Philly’s Constitution Hall (see pic) providing an iconic back drop, A Memorial Day visual/vigil was set up to honor the men and women in uniform who have died in war.  A broad coalition of peace activists from across the Delaware Valley gathered this morning to set up a stunning and evocative tribute in the form of several thousand wooden “tombstones” in honor of the Iraq War dead.

I had the privledge of being the steward of the New Jersey section of the memorial.
In the second picture (click to enlarge) I kneel next to the memorial to Army Specialist Marlon P. Jackson of Jersey City who died much too young at 25, the victim of a roadside bomb in Iraq. 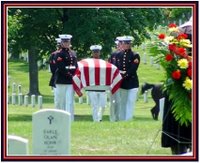 Over the weekend, NJ lost another brave soul in Iraq. The Pentagon’s website reports:

He was injured when a bomb exploded near his Humvee outside Fallijah. Shrapnel tore into his head and he was later airlifted to the U.S., where he died over the weekend.

This brings New Jersey’s Iraq casualty count to forty-three. As of May 10th, 2428 American soldiers have given their lives in Bush’s Iraq war.  Nearly 18,ooo have been severely injured.

Rob Andrews was the latest member of the NJ delegation to sign on to having 17 hours of debate on the Iraq War (so far the House has had 1 hr. on the Murtha bill, since the war started).  He joined Payne, Pallone and Rothman, to bring the total to 111.  218 are needed to get the debate on the floor.

Now we need to convince Holt and Pascrell and then start working on the Repugs.  There is bi-partisan support after all.  R:  Jones, Paul, Smith of WA to name a few.