This is Part Five of an ongoing storytelling series by NJ Communities United featuring parents, students and families in Newark & Camden. Look for them Monday mornings. The school districts in these cities have been stripped of local democratic control,…
Read more

Where Will All the Boys Go?

I’m pulling this up top again today to make sure as many people as possible see it. Are Gov. Christie’s brave new world reformers even aware of this kind of research? let alone conducting it themselves with the vast power they exercise over the Camden district and its kids? Do they even care? Promoted by Rosi, with thanks to Julia, and to her Rutgers colleague Stephen Danley, at whose excellent site, Local Knowledge Blog, Julia first published this today.

That is exactly what the Christie Administration is doing in Camden.

The Administration is transferring control of public education to three out-of-state charter corporations – KIPP, Mastery and Uncommon Schools – that are completely unaccountable to the people of Camden.  The corporations will take hundreds of millions of taxpayer dollars from existing Camden public and charter schools to build or renovate and operate 16 new renaissance charter schools.*

The three charter corporations are aggressively marketing themselves and their new facilities to Camden parents and could quickly account for 9,300 of the district’s almost 15,000 publicly-funded spots, leading to the closure of the majority of Camden’s public and charter schools.

Here’s the latest chapter in the ongoing farce that is the Christie Town Halls, courtesy of Darcie Cimarusti at the blog Mother Crusader:

An Asbury Park Press reporter detailed a heated exchange between Governor Christie and one of those four vocal residents, Alan Erlich of Cherry Hill about the Governor’s relationship to Kahn:

But after Erlich charged the charter school’s approval was a favor for a Christie supporter, the governor denied the claim.

“Who are you talking about?” asked Christie, who went on to say he does not know Amir Khan, a pastor who is organizing the school at a church complex in the Ashland area. “I haven’t given one friend a charter school.”

The exchange is already memorialized on YouTube, like so many other clashes between Christie and audience members.

What may make this one particularly interesting is that just after Governor Christie says he doesn’t know who Amir Khan is, the camera pans back, and who is sitting behind Governor Christie on the dais?  Amir Khan.  Sitting right underneath the “Jersey Comeback” banner.  Here is a still: 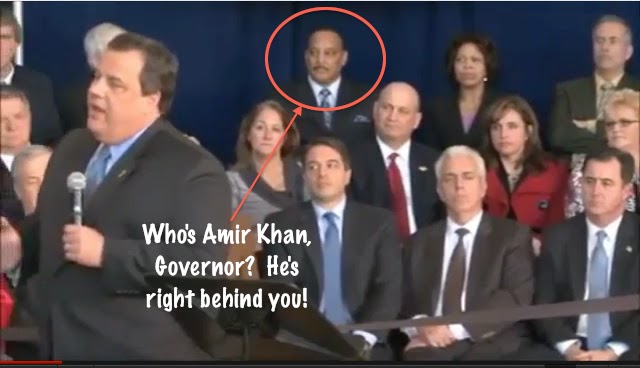 Click through to read the entire post. It’s a great catch by Cimarusti, but let’s be honest: you’re not surprised.

This weekend, I’ll deal with the other rest of Christie’s mendacity at this photo op.

UPDATE: It appears that Pastor Khan is a bit of a bigot:

Your tax dollars at work. Everyone OK with this?