Hetty Rosenstein: We will fight you to our very last breath.

“It takes a special kind of carelessness and cruelty to be willing to burn down the American dream that my father worked so hard to achieve.”

From today’s pension rally in Trenton, CWA Organizing Director Hetty Rosenstein tells the story of her father – immigrant as an infant, WWII Marine veteran of the Marines, who went to college on the G.I. Bill and became a medical librarian who raised 4 kids on a public worker’s salary, enough to get a home. She tells the story of what he told his kids when he woke up in the middle of the night unable to feel his legs, and what he told his family as the ambulance came.

David Sirota of the IBT has been doing stellar work on the conflicts of interest that have become a staple of the Christie administration. And no where is the skirting of ethics more brazen than in New Jersey’s management of public employee pensions:

It’s Shark Week 2014 in the rest of the universe, it’s Shirk Week 2014 here in Jersey with this governor.

CWA produced this video, following Gov. Christie’s decision to try and ease himself out of the revenue crisis his poor economic policies brought us, pasting over his own failures with yet another self-serving “commission” (with bonus Reagan-think piece to impress 2016 GOP donors). Missing from this commission – of course – are any stakeholders in Christie’s unilateral decision to monkey with the pensions state workers have been paying into as agreed on for years. The group, hand-picked by Christie to deliver the result he demands, are in CWA’s estimation “super-wealthy people unlikely to have any clue as to what it means to live on a fixed-income.” Sounds about right. CWA demands the pension be fully funded, as promised, as required by law.


Christie didn’t only break his word when it came to funding the pension. He also broke the very law he signed and touted as a “major accomplishment.” Gone is the fanfare. Gone is the chest-thumping. And gone are the taxpayer-funded banners proclaiming the “Jersey Comeback.” 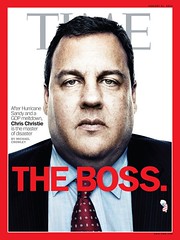 The NJDSC, which isn’t always in touch regularly and is in need of some rebuilding and rebranding after the Christiecrat years, is trawling for signatures. They want you to sign on with them against Christie’s Hollywood PR campaign to paste over his own economic failures (huge) with flashy videos to convince you (on your own dime) that his doing the wrong thing by NJ workers is OK when it’s not.

Yup, I know the Dems are using the pension issue as a hook for contributions. So what? Give or don’t. Either way, don’t stop pressuring the party to reclaim its bedrock values, and rid itself of its worms and snakes. Only a strong party can do that. If you want to require this party to be that, joining them when they do something right isn’t a bad move. Give them the benefit of the doubt, and sign.

Choose for yourself – here’s the link.

We see a thumbs-up from CWA’s Hetty Rosenstein on this Drew Sheneman cartoon at the Ledger, on what Christie’s doing to public workers. But I thought the minor edit she suggested was interesting. Quoting from her Facebook:

“Love this – except the example of the back stabbed public worker should be female and maybe not white.” 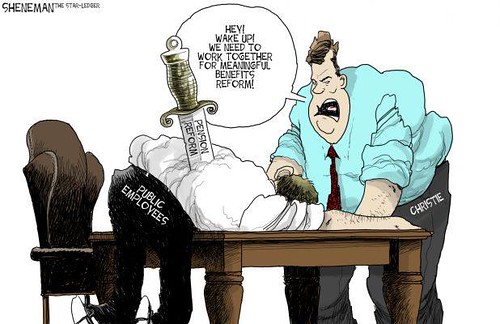 Yeah. I can totally see her point.

In this oft-told tale a pumpkin is transformed into a golden carriage to take Cinderella to the ball. However the spell lasts only until midnight and the golden carriage to bring her home reverts to being a pumpkin. Not to worry. It took trips to two balls and a prince’s determined efforts, but the story ends happily thereafter.

The legislature’s proposed  state budget reverts back to being Christie’s pumpkin before midnight tonight, yet there are reasons to believe that the story will end happily. Although Judge Jacobson ruled there was not enough time or money to make a full contribution in the 2014 budget, she acknowledged the validity of the unions’ contract and welcomed a hearing on the pension contribution to be made in the 2015 budget. Short-changing the pension contribution increases the unfunded liabilities substantially, increases concern on the part of credit rating agencies, and is a giant step backward in solving our huge pen/ben problems.

It’s a little Debbie Downer for a Friday, but here’s a video: Christie’s Failed Fiscal Record

My friend message strategist Joshua Henne put this together. It’s facty, and I like facty. Joshua is the also the one who put together the excellent Christie by the Numbers at the old One New Jersey site.

Frankly, the record of Christie’s failed fiscal policies is a little Debbie Downer for a getaway June Friday. But then again, this weekend Christie is out in Utah for Mitt Romney’s “leadership retreat” hanging with the big-business peeps and some 2016 supplicants like himself. Romney’s trying to position himself as an elder statesman and possibly even a kingmaker (Rand Paul’s coming, Christie, and even token Dem former Montana Gov. Brian Schweitzer). These are the corpo-centric Republicans – just  Christie’s crowd. They can all read, so they probably already know about his economic policy failures. But these are people who still think Mitt Romney’s relevant, so that may not concern them as much as it concerns the average New Jerseyan. Besides, for this crowd, policies like Christie’s that leave NJ unstable, downgraded and in economic turmoil are probably just peachy as long as there’s plenty of corporate welfare. And there’s plenty of that in Chris Christie’s New Jersey.

If these 4 things were made Illegal, Pensions would not be an issue

As I touched on in a recent comment, If you made these 4 things against the law, we would not have any pension issues today.

– Pay-to-Play issues, most recent example is where Christie donators got billions in pension monies that they then put into high risk/high fee funds in order to line their own pockets, while making little, if any, money gain to put back into the pension fund

If laws were made to stop these 4 issues from occurring, and the pension was still in need of money, it would then be fair to ask for more money from the workers. They worked hard, put their time in, and always paid their share of pension payments on time,  yet they are always the ones who have to pay out more to make up for monies others stole from them.

I am sure workers and unions would support putting more money towards their pensions if their money was not being used to replace money that had originally been stolen from them.

But of course, (not all, but a good amount of) politicians would never make these laws because they are the ones who benefit from the stealing. And unfortunately, while the California law capping pension amounts at $110,000 could be my #5 thing on my list to make law, I do not see CC considering such a cap being that his crowd would be most likely the ones to lose money by a new pension cap law, and not the average public workers whose majority has salaries no where near $110,000.

I started this diary to promote discussion about California’s AB340, passed in 2012, that changed California’s pension system.  It didn’t solve the whole problem but achieved important financial savings.

Such a cap would preserve current pensions for low and middle-income workers but reduce pensions for upper-class workers, for whom pensions are not as necessary.