How Not to Run A Public Meeting

(Photo: Part of the crowd locked out of the meeting waiting in the rain) Today, the Pinelands Commission gave a seminar on how not to run a public meeting. The purpose of the meeting was to hear comments on the…
Read more

Pipelines leaking toxic material into our water supply. Oil bomb trains traveling on antiquated infrastructure through our towns and villages. Fossil fuel plants spewing carcinogens into the air we breathe. These are the things we can look forward to if we conduct business as usual.

Today, a coalition of 36 environmental, religious, and activist groups announced the launch of a coalition to scrap  “business as usual” and jump start an aggressive campaign to address these problems.

Most of the actions taken by these individual groups to date have been in opposition of something – a pipeline through the Pinelands or processing of liquefied natural gas, a highly explosive and dangerous endeavor. Each group has done its own thing, often without specific goals other than to shut down a harmful project.

Now, the coalition is going head on with the dirty fuel industry by promoting the eventual elimination of these energy sources in favor of renewable energy. In a nutshell, they are proposing that our electricity be generated 100% from renewables by 2030, and the we totally eliminate dirty energy by 2050. These are realistic goals based academic research being conducted at Stanford University. 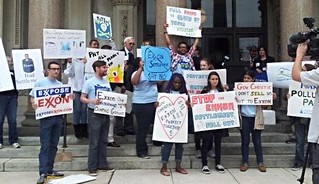 Today at State House: Rally against the Exxon giveaway

Thousands of postcards from NJ residents are being  delivered to the NJDEP today, calling for rejection of the Christie administration’s $225M settlement for polluting New Jersey. About 3¢ on the dollar for a 10-year lawsuit filed for $8.9B.

Rallying on the Statehouse steps are reps from NJ Sierra Club, NJ Citizen Action, Environment NJ, NY/NJ Baykeeper, Food and Water Watch, NJ Clean Water Action. They’re joined by assemblymen John McKeon and Carmelo Garcia, and Sen. Ray Lesniak. At a public hearing Wednesday, Lesniak testified that his read of the settlement language may allow Exxon to write off that $225M as a business expense. That would reduce Exxon’s cost, and shift the difference to taxpayers. Lesniak cites the word “alleged” in the language, which Exxon may use to distance itself from liability – enough to seek a state and federal tax break. Yesterday’s hearing was in Bayonne, one of the towns damaged by years of Exxon contamination. Everything about this deal stinks, including how it came about and the highly unusual way Chris Christie’s chief counsel inserted himself into the case. (Read Brad Campbell, former commissioner of the NJDEP).

Advocates are also inside the State House lobbying for SCR163 (Smith)/ACR230 (McKeon), which would constitutionally dedicate monies received by the state in Natural Resource Damage litigation That’s intended to stop the administration from raiding those funds to close budget holes. (see The Cost of Budget Raids)

Public comment period ends tomorrow. You still have time to register your comment. Here are 2 ways: (1) Use this Sierra Club form (2) Or, email directly to: ExxonMobilBaywaySettlement@dep.nj.gov

A Voice in the Wilderness

The New Jersey Pinelands National Reserve is 1.1 million acres of undisturbed land in this nation’s most densely populated state and is habitat to thousands of species of plants and animals. Since 1978, it has been administered by the Pinelands Commission, a group of 15 commissioners, seven appointed by the governor, one by each of the seven counties in which the reserve exists, and one by the U.S. Department of the Interior.

Given our Governor’s disdain for the environment, it’s no surprise that one of the controversies surrounding the Pinelands is the proposal to run natural gas pipelines through the area, a big risk to the water table and critters that will be impacted. Christie has systematically placed pro-pipeline commissioners on the board, aided and abetted by GOP-controlled counties in the area.

I attended my first commission meeting on Friday, and there was only one person who bothered to speak against the pipeline, Lena Smith of Food and Water Watch. Her statement and a brief interview, along with some other thoughts, are below the fold.

Press Conference on the Dangers of Fracking

Several environmental groups held a press conference in Trenton today to announce plans to attempt to override Governor Christie’s veto of a bill banning toxic waste from hydraulic fracturing. Earlier, I posted some comments by Senator Linda Greenstein on this topic. Here’s the press conference in its entirety (about 18 minutes).

Dan DeRosa of Environment New Jersey opened the event. He was followed by

What the Frack will Christie Do? 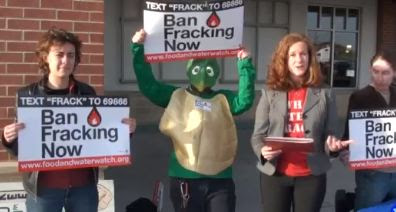 While Governor Christie has received kudos for doing his job and leading New Jersey through its worst natural disaster in memory, we should not forget his dismal record on the environment. He’s been AWOL in development of offshore wind power, irresponsible in his action to withdraw the state from the Regional Greenhouse Gas Initiative, and thoughtless in his blanket disposal of environmental protections in the wake of the Hurricane Sandy cleanup. He also vetoed a bill that would ban toxic chemicals from hydraulic fracturing (“fracking”) in the state. His rationale was that since New Jersey does not produce fracking waste, this is an unconstitutional discrimination against other states. Yet, the bill treats fracking waste from all states equally. Essentially, Christie is acting as both the executive and judicial branch, and is afraid to allow the judiciary to make the type of determination that they are constitutionally responsible for.

Sometime in the near future, there will be an attempt to override this veto. Today, Food & Water Watch held a series of demonstrations around the state to promote awareness of this clean water issue and urge citizens to contact their legislators in support of an override. The video below is from such a demonstration today in Cinnaminson. They are urging Senator Diane Allen, who voted for the ban, to continue on the side of the environment and vote to override the governor’s veto.

Trenton sources tell me that there are many Republicans in favor of an override but are unwilling or unable to contradict Governor Christie’s wishes. The hurricane has shown that there is a side of the governor willing to work across the aisle. The dynamics of the governor’s relationship to the Tea Party faction have changed.  It’s time for the governor to send a clear message to his Republican colleagues and allow them to vote their conscience on the override motion. Governor Christie’s actions will surely tell us whether he wishes to continue his unholy alliance with the discredited Koch Brothers or if he sides with the health and well-being of New Jersey residents.

Below the fold: A list of legislators who voted against the ban.

While taxes, revenue, and spending are keys to improving New Jersey’s moribund economy, they are not the only factors that enter into the equation of the state’s prosperity. While we need to spend money on preventable health issues and environmental cleanup, if we could avoid or mitigate such problems in the first place, the state’s economy would be much stronger. Yet Governor Christie’s actions indicate that he has blinders on to these fundamental truths.

Recently, the Governor vetoed a bill that would have prohibited the storage and treatment of highly toxic waste water from hydraulic fracturing. That veto was the subject of a conference call today organized by Food and Water Watch, with participation from several dozen other environmental groups.

During the call, these groups announced that they are working with the legislature to override the veto. We were told that Assembly Speaker Oliver will soon post the override in the lower chamber, and if the override is successful, it would then be brought to the Senate.

While the original bill was passed with a bipartisan majority in both houses, according to the Sierra Club’s Jeff Tittel, the vote was 3 short in the Senate and 7 in the Assembly of the supermajorities needed to override.

In his veto message, the Governor contended that the bill was unconstitutional and that the harmful effects of fracking waste water were unknown. But as discussed in today’s call, the non-partisan Office of Legislative Services has analyzed the bill, and its legal experts have concluded that the bill passes Constitutional muster. And even if the effects of fracking waste leaking into our drinking water supply are not proven, why take the risk until a full analysis is completed? (Oh yeah – I forgot that Republicans generally eschew scientific fact.)

It is a sad fact of life that the Governor is in the back pocket of the Koch Brothers, and that a large number of decent Republican legislators are in the back pocket of the Governor. It’s also sad that not every Democrat voted to ban these harmful chemicals from entering our drinking water. Below the fold, you can find how your legislator voted on the original bill.

We can spend our scarce resources on cleanup and health issues which do nothing to promote a better economy, or we can spend the money on education, infrastructure, and development to bring New Jersey back to the top of the economic pile. The choice is ours. Will the legislature do the right thing and override?

Do you oppose flammable drinking water and widespread illness caused by environmental contamination? Do you like free movies?

As noted previously by Blue Jersey (here, here and here) the controversial natural gas extraction method called “fracking” (slang for “hydraulic fracturing”) has been trying to extend its craptacular tendrils in our general direction for a couple of years now. But on Monday 11/21, the Delaware River Basin Commission will vote on new rules that could pave the way for nearly 20,000 fracking wells to be built in the river basin.

Yeah, not good for fans of safe water and good health. So along with some local partners, environment and sustainability watchdog Food and Water Watch is sponsoring two screenings of the the HBO documentary Gasland, which is to fracking what Supersize Me is to fast food.  Not sure you understand the issue and it’s potentially devastating consequences? Or maybe you’re just cheap and need something to do this week. Either way. You can catch the New Brunswick screening today at 10 a.m., and the Princeton screening tomorrow at 7 p.m. Full details below the YouTubes.