OK. So because of the quirky Electoral College, America just elected an unqualified, anti-environment bigot to be the Leader of the Free World. We’re stuck with him for four years – a tragic sequel to the generally successful and positive…
Read more

When we think of water quality in New Jersey, we usually focus on clean drinking water for residents of the state. But clean water is also the fuel that drives important industries in the state like the production of M&M…
Read more

Standing Up to What’s Right

In the famous Emanuel Leutze painting, Washington Crossing the Delaware, the future president is shown standing in his boat leading the charge to capture 1,000 Hessians in Trenton. There are no more Hessian mercenaries in our capital city, but there…
Read more

Yet another Facebook convo with a loyal Dem convinced Ralph Nader ruined Al Gore’s White House shot in 2000 made me search out this post from the Blue Jersey archives circa 2010. – Rosi 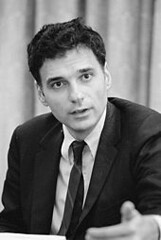 Nader, a good Princeton graduate, is mentioned in virtually every article about Earth Day history. It’s hard to transmit to people who only really saw Nader as a presidential candidate – and may disparage him for that, though I do not – what sway he had. Man, when Ralph Nader showed up, things got serious fast. He was squeaky clean. Uncorruptable. Scared the bejesus out of corpo culture. Earth Day, Nader got people thinking about corporate decisions and the power we fork over to them. Nader showed us we had the power decades before Howard Dean told us we did.

In our most-densely populated state, the preservation of open land and green acres should be a priority quality-of-life issue. But it is not for our environmentally-hostile governor. In a teleconference today, Jeff Tittel, Director of the New Jersey Sierra Club,…
Read more

While the unfettered and misplaced loyalty of the legislature’s Republican caucus to the governor has stymied the attempts to override Chris Christie’s politically-motivated vetoes, this week the Assembly managed to join the Senate (which voted in October 2014) in starting…
Read more

Changing the Rules for Political Gain

In 1979, the New Jersey Legislature created the Pinelands Commission – a quasi-independent agency whose mission “is to preserve, protect, and enhance the natural and cultural resources of the Pinelands National Reserve, and to encourage compatible economic and other human…
Read more

If you’re a regular reader of Blue Jersey and a Garden State taxpayer, you know that there are many ways you are already paying for Chris Christie’s presidential campaign. You support his army of videographers and social media specialists who…
Read more

Earlier this week, a group of kayakers joined environmental activists to raise awareness of the issues surrounding the PSE&G Mercer Generation Plant, just downriver from the state capitol on the Delaware River. While most people understand that these plants pollute…
Read more