South Jersey Democratic kingpin George Norcross III rarely faces the press himself. So when NJTV’s Michael Aron scored an in-depth interview, I decided it was worth watching. I was disappointed. While there have been notable accomplishments in improving the city,…
Read more

Alex Law, who is a democrat running against incumbent Congressman Donald Norcross in New Jersey’s first congressional district, released a video on Facebook today voicing his concerns about the seemingly impossible feat he had undertaken to schedule a meeting with…
Read more

Earlier this year, the legislature passed a law that would give certain hospital chains virtual monopolies on emergency medical services in certain geographic areas. Among them was a gift to George Norcross III’s Cooper University Hospital for such services in…
Read more

There’s an “endorsement” of Chris Christie for re-election in this morning’s Philadelphia Inquirer. It’s kind of odd.

While they give him credit for embracing President Obama in exchange for Superstorm Sandy aid, they say in the same paragraph, “he has imposed a measure of fiscal discipline.”

At the beginning of his term, he unilaterally cancelled the ARC tunnel, a project that was largely funded by federal aid and would have created tens of thousands of economy-stimulating jobs. That’s fiscal discipline?

After the storm, he unilaterally gave the clean-up contract to a politically-connected Republican firm which charged more that twice as much for debris removal as other reputable firms. That’s fiscal discipline?

When the Affordable Health Care act was affirmed multiple times, Christie turned down federal aid for assisting with the sign-up process. Aid that would be spent in New Jersey and would go back into our economy. That’s fiscal discipline?

After what was to be secret meeting with the Koch Brothers, Christie unilaterally pulled the state out of the Regional Greenhouse Gas Initiative, killing 1,800 New Jersey jobs. That’s fiscal discipline?

When it became necessary to hold a special election for United States Senator, Christie decided to squander millions of dollars on a Wednesday vote in order to maintain his own placement on the top line of the ballot. That’s fiscal discipline?

The list goes on and on. Apparently, the Inquirer interprets fiscal discipline as “balancing the budget on the backs of the poor and middle class.”


Christie has wrongly demonized teachers and abandoned a school aid formula that attached funding to at-risk children. And he should forget about an income-tax cut that would favor the wealthy and unnecessarily reduce state revenue.

Christie’s opposition to same-sex marriage and Planned Parenthood funding are retrograde. And he should improve his poor environmental record by replenishing open-space funds and setting more ambitious clean-energy goals.

Christie has also shown an unfortunate tendency to be self-serving.

The editorial mentions that Democratic party leaders have failed to embrace the candidacy of Christie’s opponent, Barbara Buono. What they fail to mention is that one of those Democratic leaders is a part-owner of the paper. And while there’s supposed to be a separation between editorial positions and newspaper management, there’s no doubt in my mind that the “old” Inky would have gone with the right choice and endorsed Barbara Buono

Is the Philadelphia Inquirer Trying to Emulate The Onion?

When I opened up today’s Philadelphia Inquirer, my eyes went to a headline that read: “A Republican greens can support” accompanied by a photo of Chris Christie. Even before I read the column, I checked the date to make sure I wasn’t reading the April 1 issue.

As the headline indicates, the columnist tries to convince the reader that Chris Christie is a friend of the environment. He mentions that New Jersey is among the nation’s leaders in deployment of solar energy (true), and that the governor opposed offshore liquefied natural gas terminals (a.k.a. highly explosive and dangerous potential pollution factories).

Cherry-picking some positive steps that have been made by the governor does not make him a friend of the environment. Christie has still refused to say that human activity contributes to global climate change and that most reputable scientists have concluded that events like Hurricane Sandy are exacerbated by global warming. The columnist does not mention that Chris Christie unilaterally, over the objection of the legislature, pulled the state out of the Regional Greenhouse Gas Initiative. And Christie’s pro-fracking stance does not exactly jive with promoting clean drinking water supplies.

The author misleads the reader by stating that “in 2009, leading environmental groups … backed Christie over incumbent Jon Corzine.” Yet, the leading and most credible environmental group, the Sierra Club, took a pass in that election, endorsing a third party candidate over both Christie and Corzine.

The column ends with a swipe at Barbara Buono’s campaign, so one has to wonder what the motivation of the author was. Was it to really tout Christie’s environmental record? Or was it just another instance of the Norcross Newsmedia working to re-elect their friend?

This, however, does not give a high-quality newspaper like the Philadelphia Inquirer permission to sell its soul. But it seems that they have done just that. Notice the advertised announcement, below. This has appeared for the past several days in the Inquirer.

First, let me say that the Cooper Health System is a top-notch organization. As a senior citizen with a chronic health issue, I use Cooper’s services almost exclusively, and  I have found the doctors, nurses, and technicians in the Cooper system to be caring professionals responsive to my needs.

But it’s bad enough to have a giant in the medical-industrial complex sponsor newspaper coverage pertaining to health. Yes, there’s a separation of the advertising and editorial staffs in any responsible news outlet, but such sponsorship leaves unanswered questions about the credibility of their health coverage.

This credibility gap is exacerbated by the fact that the Chairman of Cooper’s Board is South Jersey power broker George Norcross III. Norcross happens to be part owner of the Inquirer. Again, while the Inquirer claims that Chairman Norcross has no say over editorial content, there will always be clouds of doubt. 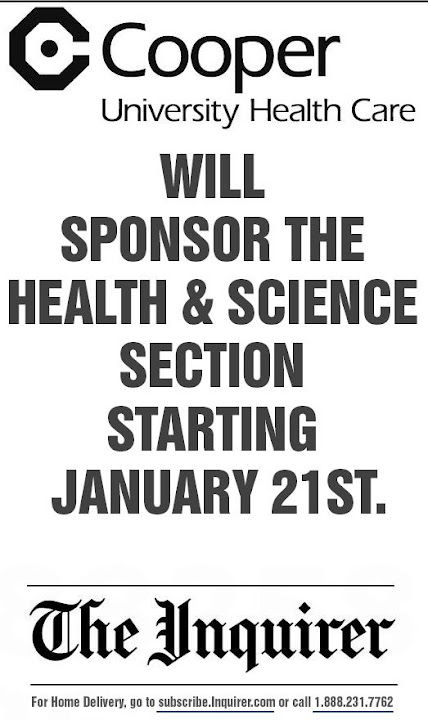 On the Governor’s Race

Can a Democrat quash the Chris Christie juggernaut toward a second term? It will be an uphill battle, but the answer is “yes” if the Democrats do things right.

To win, the Democrats need to run a flawless campaign, from strategic and tactical perspectives.

The Democrats must excite the “blue” communities of New Jersey the way Barack Obama did in 2008 and 2012.

And in addition to nominating the right candidate at the top of the ticket, the Democrats must nominate a candidate for Lieutenant Governor who can add to the enthusiasm. Normally, the choice of a number two is not a big factor, but this election is different:

The Forgotten Victims of Violence

Those 67 victims are the latest count (and may be higher by the time this is posted) of the people murdered in Camden this year.

The situations are, of course, different. The Connecticut murderer was a single deranged individual whose motive will never be known for sure. The Camden murders have come from a variety of motives from domestic violence to drug deals gone bad.

Stricter gun laws are essential and would have reduced the number of people killed in Camden and Connecticut. Maybe the Connecticut murderer’s death count would have been less if he was only able to purchase magazines with five rounds. Maybe some of the carnage in Camden could have been reduced if vengeance were taken out by knife attacks instead of the more lethal and efficient guns. So the push for more effective gun control is necessary. But it is not sufficient.

Why Sheldon Adelson Cares About who Builds Burlington County’s Roads

There’s a lot of buzz in the blogosphere about a potential Christie-Booker gubernatorial race next year. Booker has the star power to match the outside money that Christie will be receiving from the unlimited bank accounts of the Koch Brothers and Sheldon Adelson.  The Newark Mayor is also one of the few contenders who would receive the same type of fawning coverage from the mainstream media that the governor enjoys.  But a post-mortem of some local election results indicates that the right wing oil barons and religious extremists may have their eye on another prize as well.

In an article buried on NJ.com, it was revealed that Sheldon Adelson’s comrades pumped $112,000 into misleading and untruthful negative ads supporting the two losing candidates in the recent race for Burlington County Freeholder. Now that amount of money is chump change for Adelson, but the fact that he’s interested in Freeholder races is important. Not that he’d make a ton of money off of the roads and hospitals that the Freeholders control, but because Freeholders are one of the farm teams for potential legislative candidates. The more fellow travellers that Adelson can put on Freeholder boards, the more potential candidates he grooms for legislative positions.

Governor Christie announces a “surprise” news conference on taxes. The surprise is that there’s no news conference. Meanwhile, the Treasurer delays publication of April revenue data. What does that do to the credibility of a tax cut?

The Democrats’ circular firing squad is at work again.

Do you want your neighbor dumping his sewage in your back yard? I didn’t think so.

Sierra Club Director Jeff Tittel gives a report card grade to the governor and the legislature on environmental stewardship.

Will the Rutgers-Rowan controversy result in a Rutgers-Rowan campus? Who decides the school colors? How does the “Brown and Gold Knights” sound to ya?

Chalk up a win for GN3 and his buddy CC

I don’t have a dog in this race, but in today’s environment, it’s very refreshing to see two candidates argue over who is the most progressive.

Supporters of Dharun Ravi gathered in front of the State House to urge the court not to send Ravi to jail. Ravi was convicted on several charges for using a webcam to spy on his gay roommate’s activities. If he gets a jail term, Ravi is subject to deportation.

Ravi is not the only one looking for a break from the courts.

The “C” in their name stands for “conniption”. JC Penney has 15 stores in New Jersey and the conniption is coming from the bigots. Here’s why you should shop there.