This Wednesday: Bring cookies, bring your kids – Show the love to Verizon workers on the picket line

Nearly 5,000 New Jersey Verizon workers went out on strike 19 days ago; on the East Coast almost 40,000. This strike is big, and the issues at its heart are now in the narrative of the Democratic primary – Sanders…
Read more

Does your state senator or assemblyperson support the striking Verizon workers? Certainly not if they’re a Republican – as all of the supporters who showed up at today’s rally in Trenton were Democrats. Several legislators spoke out today in favor…
Read more

With all of the burdens that our governor has placed on state workers, one thing our public servants should not have to worry about is their personal safety. But that’s not the case. Take the plight of Leah Coleman –…
Read more

One measure of the quality of life in a community is the commitment it makes to its public library system. The Camden County Library System includes eight branches scattered throughout the county. The workers are represented by the CWA, and…
Read more 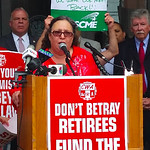 Quote of the Day from CWA’s Hetty Rosenstein, who with other NJ labor leaders stood with Democratic leaders yesterday as they prepared to send a budget to Gov. Christie that raised taxes on New Jersey’s wealthiest and its corporations. Now, the governor has struck down key provisions of that budget, excising $1.6 billion from it, and keeping his promise to wealthy Republican presidential donors outside Jersey that he’ll be a 2016 candidate that hews to their worldview of a shrunken government of low expectations. The Democratic budget doubled funding to pay into the state pension system – no official word yet on Christie’s disposition there, but you already know that story. The Dems also included an increase in the earned income tax credit from 20% of the federal level to 25%; Christie says he wants to see that at 30%.

“No one should be surprised today. Whenever given a choice, Chris Christie stands squarely with millionaires and corporations over working people every single time.

WATCH: Jim Keady on The Ed Show – on the Fast Track trade vote

Jim Keady was on The Ed Show again last night, talking about Fast Track and the disastrous vote in the U.S. Senate yesterday. I’m watching this in a noisy coffeehouse without earbuds, so I can’t listen as closely yet as I’d like. But I wanted to post it for you soon as I could.

You know Keady as the guy Christie made a fool of himself with, yelling at Keady to sit down and shut up about Sandy recovery and do something to help, when in fact he volunteered a month doing that – not the first or last time Christie made a harsh and incorrect assumption about a constituent. But not all voters know that Keady has years studying the work lives of foreign workers and is head of the U.S.-based labor rights group Educating for Justice, which focuses on southeast Asia. President Obama spoke at Nike HQ to promote TPP, which is interesting because Keady seems to know more than the president does about what Nike workers lives are really like where those pricey shoes are made. He wrote about his recent trip to Vietnam in a project in conjunction with Sen. Bernie Sanders office here at Blue Jersey yesterday. In this MSNBC clip, we see Sanders’ speech on the Senate floor, following Mitch McConnell’s rah-rah TPP cheering. And joining the segment with Ed Schultz and Keady are a very angry Sen. Sherrod Brown and Larry Cohen, former president of CWA.

Pen/Ben Ruling: Public employees are left in the lurch

PBA President Patrick Colligan responded to the NJ Supreme court decision: “Today’s ruling is disappointing because it fails to make Governor Christie keep his promise to hard working law enforcement officers. The fact is that our members agreed to pay an additional 1.5% directly from their paychecks to fund our pensions as a result of the Governor’s own highly touted pension law. While the Governor promised to use these funds to help secure our pension fund, he is now hiding behind the courts in an effort to continue syphoning these funds for his own political gain. This is not leadership.”

Public employees are left in the lurch. The governor succeeded in his quest of not being required by the Supreme Court to make pension payments in accordance with the 2011 law.