UPDATED! “They can’t suspend this many of us!” The student walkout at Cherry Hill High School East

Not NJ (not directly). But I think you should see this: Police dumping a woman with MS out of her wheelchair as she fights for healthcare

If you follow my personal Facebook page, you know I flagged two things outside NJ that took the healthcare fight right where it lives: Sunday: Bernie Sanders rallied in Covington, Kentucky, Mitch McConnell’s state, and on the border of Ohio (340k…
Read more

Bonnie Watson Coleman: “I’m here because Blue Jersey told me you were here!”

One year ago today was my very favorite Blue Jersey moment of 2016. On the floor of the House, a full-on revolt; a 25 hour sit-in on guns by Democrats in the wake of the shooting at a gay nightclub in…
Read more

Are you represented in Congress by a Democrat? Check your district office – there are follow-up events all over the country to last week’s sit-in. I’m repped in the House by Leonard Lance. I won’t bother calling; I know where…
Read more

Following the gun massacre at gay dance club Pulse in Orlando, the everyday litany of gun deaths in America, and the historic sit-in of House Democrats led by Rep. John Lewis last week, one of its New Jersey leaders will…
Read more

Chris Christie isn’t the only person from New Jersey capable of making national news. Skip for a sec the Flemington deli man serving up racism with his sandwiches picked up in Salon last week. But this is so much better. 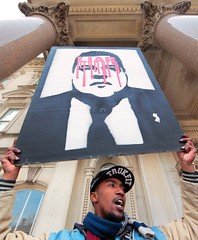 I just want to make sure everybody sees the amazing coverage the Newark Students 4-day sit-in at Superintendent Cami Anderson’s office is getting in Rolling Stone.

They deserve it. These kids are badass. Hardcore. Well-versed in the issues of importance to them, well-supported by parents and community. Efforts to intimidate them only make their adversaries look ridiculous. And what they’re doing absolutely should be a model for students who value education and see it threatened. We have so much to be proud of in them.

The piece, by Rebecca Nathanson, opens with the boneheaded decision by the office of the absent Anderson to withhold food that parents and community brought to the front door of the Newark Public Schools building, for the kids upstairs with two adults supporting them. What looked like an effort to starve out minor children – on public property no less – went viral quickly via social media, then national. A PR disaster for NPS.

That one moment underscored the basic reality of Cami Anderson’s tenure in Newark. Defending her are Gov. Chris Christie, who picked her, and whose state Ed Dept. just re-upped her at a whopping big salary. And that’s it. Her presence, disrespect for families, her incompetence, disorganization and failures to account for what she’s doing, are resented by just about everyone else – students, who’ve led a thousand kids to walk out of school, parents, Mayor Baraka, teachers, and much of the School Board. Through it all, the students put themselves out front.

Newark Students talk about What Brought Them to Civil Disobedience

New Jersey, these are your young people, the leaders of Newark Student Union. They are dealing with the knife edge of issues that could easily make it to your own local schools, if they haven’t already. You may remember that one of the demands these high school students, and their parents, made of Christie-appointed Superintendent Cami Anderson is that she finally attend the School Board meeting on the 24th, as superintendents should be expected to do. That’s tonight. The meeting’s going on now. And again, Cami has ditched. Here is what the students have to say:

Cami Anderson waited out 65 hours during a civil disobedience action by the leadership of Newark Student Union. During that time she avoided her office as calls for her to show up and address student concerns came via social media from all over the country and the street below filled with Newark parents, community, clergy, the press and even Mayor Ras Baraka.

Today she finally walked in and talked for about an hour. Officials asked students not to record the conversation or let anyone know she was coming. But then Newark Public Schools released their statement during that meeting. It was a savvy, but bad-faith, effort of NPS to gain back some control of the disastrous PR effect this sit-in has had on Cami, on One Newark and NPS.

The occupation will end at 5:30 today, as students come downstairs to talk to the press. Now they shift their focus to Chris Christie, another absentee figure and a politician already dealing with public relations problems, but who bears ultimate responsibility for the mess Anderson has made.

Here’s what the students said a about targeting Chris Christie:.

UPDATE 1: Watch Newark Public Schools officials attempting to withhold food brought to the building by parents & community to manipulate students into ending the sit-in in order to eat. Food was held up for hours by NPS officials yesterday, until clergy forced themselves through security. Watch

Full letter, signed by Cami Anderson’s Assistant Superintendent, is at end of post.

Yesterday, as Newark high school students were rolling toward their first 24 hours of a sit-in protest at the office of School Superintendent Cami Anderson, this letter was hand-delivered to their parents at their homes. I’m told that Newark police officers were used to deliver them, a dubious use of law enforcement personnel. Nothing says I care about your kids better than sending a cop to your door.