Q: There has been some criticism that it is bringing in more private interests and privatization of public schools.

It doesn’t mean that money doesn’t matter, but it needs to be targeted money and targeted reform. More money into a failing system is just a more expensive failing system. I used to call it educational child abuse, and I think Chris Cerf and the governor are open to what needs to be done.

Q: But Christie is pressing ahead with private school voucher program, at least through a proposed pilot. Your son, state Sen. Thomas Kean Jr., is behind it, too.

A: I think pilots are fine. I have never been for private school vouchers, but I think small experiments to see if something works, it is hard to be against that. I am very pragmatic on education these days. It’s not ideology; it’s what works, what’s going to help the African-American or Hispanic kids in the middle of Newark or Paterson or Camden and feels trapped in a system that doesn’t work. [emphasis mine]

See, Tom Kean is against school vouchers! Except for when he is for them! You know, just to see if they work! But Kean’s still against them regardless! Except maybe he’s not… it’s confusing…

By the way, Governor: a “pilot program” for vouchers would pretty much be useless in terms of demonstrating anything about whether a large-scale program would work. But I think we all know that’s really not what the NJ voucher bills have been about, don’t we? (Hint: Why do the OSA bills always include Lakewood?)

This is the intellectual rigor I suppose we can expect from JerseyCAN. 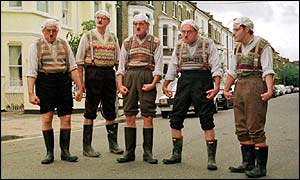 JerseyCAN Board of Directors

ADDING: More of the wisdom of Tom Kean:

Q: What about those saying this is an issue of poverty, and we need to get to the root causes?

A: To me, that’s an excuse. I have headed the national committee against teen pregnancy for years — one of the causes, and yes, we have to get at that. We do have to work at the various causes, no question about that, but to say that people are poor and therefore they can’t learn, that’s an excuse I’ve never accepted.

So, poverty is “an excuse” – but it’s still “one of the causes” of differing educational outcomes. See, poverty is a real factor in education – but the best thing to do is ignore it.

Give the man credit: it’s not easy to contradict yourself within a few sentences…

The long-awaited Halfway House drama starts at about 2:00 PM with a hearing of the Senate Legislative Oversight Committee. There were many warnings of problems culminating in the N Y Times series Unlocked. Now the investigation begins.

Key scheduled witnesses will include:

I met with Senator Barbara Buono in Edison yesterday to discuss some current issues. In this interview she talks about (among other things) “The Ghost Entity”, why the two weeks after the November election are extremely important, why it’s taking so long to implement a law that helps sick people, the governor’s destruction of the integrity of our judicial system, and of course property taxes. She even lauds a Republican New Jersey governor (not the current one!)

UPDATE: Ledger now featuring this story along with a fresh quote from Christie: “We’ve only used it for business purposes. When I have to use it for political purposes, we make sure we pay it back.”

Bloomberg/Business Week put some numbers to Chris Christie’s routine commandeering of the $12.5 million state police helicopter this morning. Ordinarily, we might trust a governor to make his own decisions about how to motor around. But this is New Jersey. We’ve had a governor who nearly killed himself speeding without a seat belt. Now we have one who squires around in a chopper, frequently using that 55-foot Homeland Security resource – designed for emergencies and to transport critically injured people – for political or family events. And that’s something the public should nose into, particularly when the governor in question styles himself fiscally responsible, and tells other public workers to tighten their belts and seems to think his constituents laze around waiting for government cheese (which offends us and Tom Moran, too.

Over at Bloomberg, they requested documents, and pulled out the calculators. Whole Christie Airborne for WrestleMania as Helicopter Flights Triple, is worth reading. But I’ll summarize:

This caught my eye:

One assistant commissioner, Penny MacCormack, was hired last fall for three months at $1,000 a day until she could be confirmed by the state Board of Education as a permanent hire in January. She is now earning a salary of $135,000 a year, officials said.

Cerf defended the extra pay, saying MacCormack was a critical hire and the consultants on the funding report – including some notable national names in the school funding debates – were invaluable.

“This level of talent and expertise comes with a price tag,” he said.

So I looked up who Penny MacCormack is. She’s moving here from Connecticut where she’s been working in education for a while. And joining other people from around the country jetting in to reshape NJ’s education system.

It used to be that part of conservatism meant knowing a place well and being skeptical of outside big ideas. But now it means being part of a shadowy national Koch Brothers funded network that tells each state what to do.

Ms. MacCormack might be a fine person for all I know, and I don’t mean to cast aspersions on her personally. It’s just that there is a lot of value in knowing a place well. States, and communities, are different from one another. Yet so many of Christie’s ideas, especially on education, are much more one size fits all – like the idea that charter schools are always better even when local communities don’t want them.

Looking at big ideas too often misses that different things work in different places. Here is perhaps my favorite story (outside of NJ) about this – a school reform effort that looks NOTHING like what everybody thinks should work but is getting results.

We need more outside the box thinking from the ground up and fewer national “experts.” Unfortunately, Christie is not someone who gets that – unlike, say, Tom Kean, who did an amazing job building a talented, homegrown staff. And our state is the poorer for it.

Wait a second – did the Minority Leader of the State Senate just try to claim property taxes don’t matter that much? He says that when Democrats bring property taxes up, they are trying to “change the subject.”

Guess so. Guess he kind of has to, since they’ve gone up 20 percent under Governor Christie. So it makes sense that’s a subject that they don’t want front and center.

The context: defending Christie’s decision to focus on the income tax cut instead of property tax issues. The claim: “the income tax matters for job creators.”

Yep – give those millionaires more money, and they’ll create jobs.

I don’t need to say “we’ve heard this one before.” I mean, this worked super well at the national level, right? The Bush tax cuts brought us all into a new era of job creation and prosperity that we’re enjoying?

Let’s change the subject to property taxes. They are too high, and our system of government is overly dependent on them.

And if we want to talk about jobs (where NJ is doing a lot worse than the nation as a whole in reducing unemployment so we should talk about that), let’s talk about jobs – and not some specious claim, backed in Kean’s article by anonymous quotes from supposed business owners, that we’ll get there indirectly through cutting taxes on millionaires.

And Union County Shall Rule Them All

PolitickerNJ, which has a stupid policy of not linking to other sites that is against all that the Intertubes hold holy (we’re better than that), is reporting that John Bramnick (R-21) is in line to be the new Republican minority leader in the Assembly.

He would join Tom Kean, Jr. (R-21) who holds the same position in the New Jersey Senate.

If you look very, very closely at the two names above you’ll notice a commonality after them: R-21.  Yep, they’re both from Union County district 21!

You know who else has a lot of ties to Union County?  Governor Chris Christie who cut his legal teeth as a partner at Dughi & Hewit in Cranford.  Sure, we think of Christie as a Morris County guy, but still …

Union County has an awful lot of power in the GOP right now, especially for a county that doesn’t have one Republican elected to a county position.

President Obama spoke forcefully last night and announced a bold $447 billion plan which could help New Jersey put more people back to work, put more money in the pockets of those who already have a job, and incentivize employers. If fully implemented it would push sufficient money into our economy to reduce unemployment and grow our GDP in 2012. While Republicans appear more receptive than anticipated, it is questionable whether the entire plan will be enacted. The plan itself is a one-year shot-in-the arm to prime the pump and provide relief, but it is not a panacea. For Obama, New Jerseyans, and most Americans there is much in the balance. Our President appears determined to swim, not sink, but will have to negotiate the rough currents with all his wits and cunning.

Hey, Tom. If you don’t want the legislature to hold an override vote on the Governor’s egregious use of the line item veto on the budget, then tell the Governor not to be an ass in using it.

The easiest way to keep from having to make hard votes like supporting the abusive and draconian cuts made by your Governor is to stand up to the bully and tell him to stop it already.

But you don’t have the cajones, as you showed in the past.