David Samson, famed for his ‘Chairman’s Flight’ gets a soft landing

David Samson, who had previously pleaded guilty to coercing United Airlines into running a route he personally wanted even though it was not profitable (the “Chairman’s Flight”), was sentenced today to a year of home confinement, four years of probation…
Read more

Dressed in funereal black/grey clothing David Samson, once considered an eminent New Jerseyan, but now an admitted crook, entered Federal Court in Newark this morning. The former Chair of the NY/NJ Port Authority, he pleaded guilty to using his post…
Read more

ON MEET THE PRESS

In the event of emergency, please place the oxygen mask on Mary Pat before yourself

Cartoonist Drew Sheneman sees Christie crashing, like pollster John Zogby does. Personally, I think Christie can keep that plane in the air on the sheer volume of hot air and determination. I hope he reads this and continues his quest, because the weather is nice, the birds are chipping and I don’t want him back. 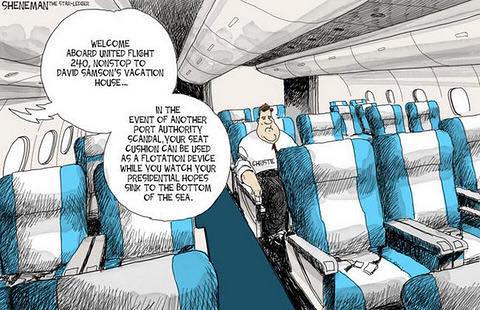 Bad omen for former Port Authority Chair David Samson: United Airlines Chief Executive and two other senior officials have stepped down during a federal corruption investigation on whether the airline had improperly sought to influence senior officials at the Port Authority of New York and New Jersey. Samson was granted “The chairman’s flight” to South Carolina where he has a home.

Feds drop study of cancer risks near nuclear sites including Oyster Creek, arguing they don’t haver the time or resources.

Pinelands burning: Firefighters are battling a blaze that has burned through about 1,000 acres of the Pinelands.

Obama said about Christie: “And then there was the guy – these guys are running for office, they’re running for the presidency – who said a union deserves a punch in the face. Really? Tell me how you really feel.”

Thursday the NJ Economic Development Authority will consider a host of new tax breaks to corporations, including $253 million for a Camden venture. NJ Policy Perspective has detailed in the past that the subsidies the state has offered to companies to relocate in Camden are highly risky, “come at a tremendous taxpayer cost per job and mostly shifted existing jobs around the region, doing little to grow the broader economy.”

If Christie were mayor of New York City he says, “Stop-and-frisk would be back in about five minutes.” Guess what guv: “Stop and Frisk” searches remain legal in NYC, just under more appropriate regulations.

Former Senator Joe Lieberman was in Teaneck yesterday to support Democrat Josh Gottheimer, who is considering a 2016 challenge to U.S. Rep. Scott Garrett.

Pot Smokers beware: NJ Appellate Court ruled that police may still search people without a warrant when they detect the smell of marijuana.

Add Bon Jovi to the list of artists scheduled to perform in China only to have their concerts canceled due to some sort of affiliation with the Dalai Lama.

For Christie, Bridgegate is not behind him

Gov. Christie last evening held a New Hampshire “Town Hall” at Fury’s Publick House which lived up to it’s name when Eileen Sahagian, a  former NJ resident, exclaimed to him, “When I heard about the Bridge Scandal, I was beyond horrified. It reminds me of feudal times … when the king would say, ‘Who cares about the peasants?'” … She was “worried about having a president who has people around him who think that’s OK.” Christie sidestepped the concern by saying “I played no role in the lane closure incident. If they could have gotten something on me, I suspect they would have.”

The question was not whether he played a role but about those around him. Christie has been trying to put the issue behind him. He said, “I am going to stop apologizing for it.” However, he will have difficulty achieving that goal. Investigations continue. The lives of people trail him – those who appeared recently in federal court and those who wittingly or unwittingly were involved.

So far there are only 3 federal indictments. There remains a substantial likelihood that Christie’s close confidante David Samson who once ruled questionably over the NY NJ Port Authority will be indicted. The PA itself has received subpoenas from  the NJ U. S. Attorney, County of NY District Attorney, Securities and Exchange Commission, NJ Select Committee on Investigations (NJSCI) and NJ State Ethics Commission (NJSEC). The NJSCI should want to delve further into whether state laws were broken and seek remedies. Although the NJ Acting Attorney General and NJSEC operate under the authority of the governor, they should also investigate and prosecute where necessary. Also there are civil suits.

For other individuals involved who may be “co-conspirators” go below the fold.

The NY/NJ Port Authority (PA), once held in the highest esteem nationally, has post-Bridgegate suffered a severe blow to its reputation. In its “Preliminary Official Statement” of bond offerings (page I-4), it disclosed the huge number of subpoenas it has received. The subpoenas open a window into a broad investigation of PA-related activities. Those issuing the subpoenas include the NJ U. S. Attorney, County of NY District Attorney, Securities and Exchange Commission, NJ Select Committee on Investigations, and NJ  State Ethics Commission. Issuance of any one  subpoena does necessarily result in a criminal charge. However, the breadth of such an unprecedented number of requests is a harbinger of changes to come. PA Chair John Degnan discusses some of these changes and other matters on this weekend’s NJTV “On the Record.”

The NY/ NJ Port Authority, once held in the highest esteem nationally, has post-Bridgegate suffered a severe blow to its reputation. In its “Preliminary Official Statement” of bond offerings (page I-4), it disclosed a huge number of subpoenas it has received. The subpoenas open a window into a broad investigation of PA-related activities. Those issuing the subpoenas include the NJ. U. S. Attorney, County of NY. District Attorney, Securities and Exchange Commission, NJ Select Committee on Investigations, and NJ  State Ethics Committee. Issuance of any one  subpoena does necessarily result in a criminal charge. However, the breadth of such an unprecedented number of requests is a harbinger of changes to come.

I mean, they’re scrubbing his name off everything.

David Samson, who faces a widening federal criminal investigation into his actions as the former Port Authority chair, is not only retiring from the practice of law, but Wolff & Samson is changing its name, completely eliminating his.

Sounds like a defensive crouch on the part of Samson’s law firm. Maybe they’re expecting an indictment soon? David Samson is a towering figure in NJ law; the founder of a powerful firm, and a mentor of a national-figure Republican governor on track for a White House run. The Samson name should give the firm gravitas, even after his departure. But  – nope – it won’t get the chance; they’ll rebrand with another Christie insider, Jeff Chiesa, headlining the firm.

Samson’s been under investigation by U.S. Attorney Paul Fishman for months for dealings in a number of areas, including: