How New Jersey’s Segregation affects Schools, Businesses and Beyond

Today NJ Spotlight’s John Mooney highlights the Civil Rights Project at UCLA, and its research that New Jersey has the most segregated schools in the country. It’s a sobering report, that shows the challenges the state’s schools have, and hints…
Read more

I just want to give a shout-out and congratulations to NJ Spotlight, which just secured funding for something I think is going to be a cool tool. If you do a daily news roundup like we do here at Blue Jersey,…
Read more

State and local budgets are arguably the toughest challenge that citizens and politicians need to face. After all, unlike the Federal government, the state cannot run a deficit, nor can it print money. So it was with great interest and anticipation that I attended the release of a report from the State Budget Crisis Task Force earlier today.

As the presentation started in a ballroom at the Trenton Marriott, the panelists took to the stage and one thing hit me in the head like a falling anvil. Everyone on the stage was a white male. And with the exception of the moderator, John Mooney of NJ Spotlight, all had gray hair. To me, this was is hardly an approach that instills confidence that the interests of all of the citizens of one of the most diverse states in the nation are accounted for in the report.

Nevertheless, there were some big names on that platform. Representing the umbrella organization, the State Budget Crisis Task Force were Paul Volcker and Richard Ravitch.  Among the VIPs in the audience was former Governor Jim Florio.

Volcker, a New Jersey native, is a former chair of the Federal Reserve. Ravitch, is a former Lieutenant Governor of New York (and ex-husband of education advocate Diane Ravitch).  The Task Force has done similar analyses in several other states. Here in New Jersey, the leader of the group is Richard Keevey of the Rutgers School of Public Affairs and Administration in Newark.

If you’re reading this, you are probably more involved with, and informed about, the political system in New Jersey than most citizens. You’re aware that despite being sandwiched between the New York and Philadelphia news behemoths, there are many outlets to provide you with news on the state level. But what about news that most affects your pocketbook and your daily life – news about your local community?

Local news has suffered with the cutbacks in dead-tree newspapers. If you’re fortunate, your community is covered by a hyperlocal site from patch.com or some other local citizen-journalist enterprise. Hyperlocal news sites are cropping up across the state and nation. But how do these citizen-journalists, some who put in 12 to 15 hour days, do their job effectively?

The New Jersey Hyperlocal News Association’s (NJHNA) mission is to provide training and resources for those journalists to enable them to report thoroughly and accurately. The group held its second general session today on the Rutgers New Brunswick campus. The topic was reporting on the activities of local school boards. 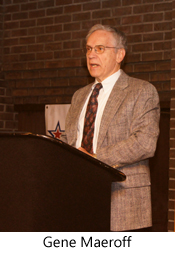 After introductory remarks from Heather Taylor of NJHNA and Dr. John Pavlik, head of the Rutgers journalism department, the keynote address was delivered by Gene Maeroff, President of the Edison school board and a noted education writer. He described the school board budgeting process and offered some tips for those reporting on school board activities. (The entire session was videotaped and will be posted on the NJHNA web site.) Following the keynote, a panel discussion was held, with Jonathan Busch, an attorney who represents boards of education; Dr. Valerie Goger, superintendent of schools for Bernards Township; and John Mooney, founder and education writer for NJ Spotlight. All discussed the budgeting and election process from the perspective of their individual involvement.

Among the things the audience learned were the timeline for the budgeting and election process, how board of education members must not electioneer for or against the budget, and the impact of the governor’s tax caps and cuts on the education process. There were discussions on the best ways for local reporters to ferret out facts that might not always be easy to obtain.

NJHNA’s next session, scheduled to occur in about two months, will discuss how to cover municipal meeting and elections.