Our first progressive Governor Woodrow Wilson whom Murphy should heed

Bumped from the weekend. – by Rosi After serving as President of Princeton University, and then campaigning for the governorship, Wilson quickly shed his professorial style for more emboldened speechmaking, and presented himself as a full-fledged progressive. As governor (1911-1913) he…
Read more

The DNC wants you back. Do you want to hear from candidates for next DNC Chair?

There is a big leadership vacuum at DNC. That’s dangerous, given that there isn’t one with the Republicans. Their top guy may be nuts, may be relying on Ivanka & Jared for guidance, and taking time for Kanye West photo-ops…
Read more

In an email to members of the Progressive Change Campaign Committee, Congresswoman Watson Coleman announces early support for her colleague Rep. Keith Ellison to be the next chair of the DNC, She joins Bernie Sanders, Elizabeth Warren, Chuck Schumer and…
Read more

Keith Ellison wants to be DNC Chair. And so does Howard Dean.

Bernie Sanders just endorsed Rep. Keith Ellison today. And Howard Dean, who revolutionized the DNC with his 50 State Strategy during his term running the party (2005-2009) wants that chairmanship back. In recent years, Dean has become a lobbyist, and…
Read more

Changes at the DNC

I want to flag something for you – which is potentially very good news – before another day’s news cycle gets eaten by the horror movie parody that is the Donald Trump for President campaign. Do you know the name…
Read more

Howard Dean to headline NJ Dems State Conference in May 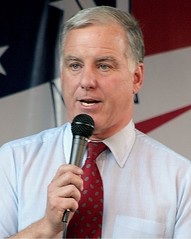 This morning, on Morning Joe, Howard Dean got into a ferocious argument with both Joe Scarborough and Mika Brzezinski. Dean was defending Hillary Clinton against allegations in a new book – Clinton Cash by Peter Schweizer – that the Clinton Global Initiative took undisclosed funds from a Russian oil company as that company was securing State Department approval for deals in the U.S..

Gov. Dean is emerging as an important surrogate for Clinton. Their relationship goes back decades to Clinton’s failed healthcare reform efforts as First Lady. And it’s an interesting juxtaposition, given that the organization Dean founded – Democracy for America, of which I am both a member and a leader – has put resources behind the quixotic efforts to draft Elizabeth Warren to challenge Clinton.

In her downsized Iowa rollout, Clinton paraphrased Warren talking points on income inequality, though it remains to be seen if Clinton, more identified with Wall Street money than Main Street problems, will learn to make that case authentically (I think she can). One direction Campaign Clinton is making – a happy surprise – is a return to Howard Dean’s 50-State Stragegy, which will send paid staffers to both blue and red states, D.C. and the territories to ramp up grassroots organizing – trainings, local meetings, events. 50-State Strategy was Dean’s baby as DNC chair (2005-2009). The potential of this is more than just the optics of populism one might expect around a Warren candidacy, more than a Clinton one. A true 50-State Strategy, well-resourced and with advice from Dean, may have the potential to convince Democrats unmoved by dynasty politics and the “inevitability” factor of Clinton (which was also pushed in 2008) that there’s something more organic – maybe even exciting – happening in Clinton’s campaign. If they mean it, it’s smart.

We’ll have to see. But expect Gov. Dean to talk about it in Atlantic City.

On the jump, Clinton’s video, The Power of Organizing. Worth a look.

There was a time I really admired Howard Dean. Alas…

Correction: Must have been tired when I wrote this. Murphy was Dean’s Finance Chair, not Director. I knew that. But thanks to BL for flagging it.

Early news pieces took note of Phil Murphy’s time as a Goldman Sachs exec, and ambassador to Germany, skipping over the part of Murphy’s bio that always interested me more.

Phil Murphy was Howard Dean’s Finance Director at DNC, which makes him a key player in the span of Democratic activity that made most sense to me, and under which Democrats strengthened state parties, and took both houses of Congress and the White House. Phil Murphy was the guy that made sure Dean’s 50-State Strategy was well-financed.

I don’t agree with Howard Dean on everything, but he’s still making sense to me right now, post-Tuesday asking where the Hell was the Democratic Party? and talking about the Dems’ failure-to-commit, chickenshit (my term, not his) failure to stand for anything, as its own undoing.

Talks around the edges of some of what 50-state strategy was without mentioning it – because it is gone.

And, the 18th Annual New Jersey Democratic State Conference will be held from May 15th – 17th.