Phil Murphy’s new ad: “Bridges”. What do you think of it?

“They’re biggest triumph was a traffic jam.” “We are better than this.” – pullouts from “Bridges” It’s not much of a reach to pile onto Kim Guadagno, Bridgegate’s dangerous trickery. Like the smart prosecutor he was, Christie managed to insulate himself…
Read more

Here’s something I think is a great idea. We talk about how party and candidates don’t show up much until campaign season, and then mostly to ask for money. I have unending sympathy for the permanent campaign House members have…
Read more

This Wednesday: Bring cookies, bring your kids – Show the love to Verizon workers on the picket line

Nearly 5,000 New Jersey Verizon workers went out on strike 19 days ago; on the East Coast almost 40,000. This strike is big, and the issues at its heart are now in the narrative of the Democratic primary – Sanders…
Read more

“Twenty dollars in their pockets, hearts full of hope, and me in their arms.” That’s how Peter Jacob describes the situation when his parents came to America in 1986. Peter was six months old. Now, in a storybook illustration of…
Read more

Camden – despite political mileage at its expense by Christie, Norcross, Obama – still ranked #2 most dangerous city in U.S.

Our friends at Camden NAACP sent around a listing that provides a needed reality check to the much ballyhooed success of the Camden county police force. Camden is – still – listed as the second most dangerous city in America, based…
Read more

From Conservative Solutions PAC, some of the money behind Marco Rubio, two ads destined for the New Hampshire market and quick with the first-in-the-nation primary just 5 Tuesdays from tomorrow. Look at Me (30 seconds): The first is Look at Me, a look…
Read more

Where is Our Apology Governor Christie??

It has been a banner week for the man-who-would-be-president here in New Jersey. This week Governor Christie raised the art of spin to new heights by suggesting the abysmal polling numbers in New Jersey reflect our desire he remain our Governor rather than leave us for higher office. He redefined poor judgement by delivering a profanity laced speech at the Legislative Correspondence evening. And he revealed his delusional tendencies by demanding an apology from the press corps for making him seem guilty for Bridgegate.

Well Governor Christie, I am writing to say that I demand an apology from you. The list of reasons is long, so I will highlight the obvious reasons that you owe me and the people of New Jersey a lot of apologies.

First, for lying, breaking your promise, and not honoring the contract you signed on state pension benefits. You ran for office on the promise you would not touch state pensions. Then you touched them with a contract that required the state make payments in exchange for increased contributions from the state workers. They paid. 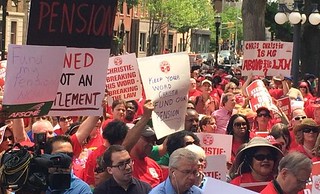 With unemployment in the Northeast and the United States steadily decreasing since the height of the Great Recession, unemployment remains high in New Jersey.

According to the Bureau of Labor Statistics, for February 2015, New Jersey had the 42nd lowest unemployment rate in the country with 6.2 percent. Connecticut to be fair was 41st with the same rate.

To make matters worse, according to New Jersey Policy Perspective, average household income levels have fallen from $74,209 in 2007 to $70,165 in 2013. Granted part of this is due to the recession and while it hit a plateau in 2011, that’s not the same as growth.

So what’s the problem? Is it the tax system? The infrastructure? The minimum wage?

With facts (and help from a psychic advisor) below is what you need to know about our new year:

For more go below the fold, and

Happy New Year to all our readers.