Lest you think Republican voter suppression is limited to swing states like Ohio, Florida, and Pennsylvania, it’s going on right here at home, too.

This morning, Willingboro Democratic Committee Chair Lavonne Johnson described how GOP sympathizers are working to suppress the Democratic vote in Willingboro – a town that must realize a heavy voter turnout if Shelley Adler has any chance of upsetting Jon Runyan.

If Shelley Adler is to win her congressional race, she needs to ensure that her base goes to the polls on Election Day. To that end, the Adler campaign brought in Newark’s popular mayor, Cory Booker, to appear at a rally at the Willingboro Senior Center.

About 200 people, mostly seniors, came to hear Adler and Booker.  Adler spoke briefly – she didn’t need to promote herself. After all, the audience knew well that her opponent, Jon Runyan, is no friend to senior citizens. And the crowd was there to hear the rock star mayor of Newark. Booker didn’t disappoint.

Hizonner spoke extemporaneously for over a half hour – he was part preacher, part stand-up comic, part motivational speaker, and part poet. The audience remained engaged throughout as Booker invoked the late Michael Jackson in describing how the GOP does its forward-appearing but backward moon walk. Booker talked about how “sedentary agitation” helped elect Chris Christie three years ago. He talked about how Newark is the wine capital of America. And lots more.

Booker’s remarks start at about the 9 minute mark in the video.

Dave Levinsky’s reporting on the event is here.

Disclosure: I do canvassing for the Adler campaign.

Despite the snow and slush, there was a good turnout at a Get Out The Vote Rally tonight in Willingboro. The keynote speaker was Newark Mayor Cory Booker (who was introduced by long-time New Jersey resident and Olympic gold medal winner Carl Lewis). Booker spoke in support of our legislative slate (Assemblyman Herb Conaway, Troy Singleton, and Gail Cook). Following his remarks, Booker spoke with Blue Jersey:


Mayor Booker’s remarks to the crowd are below the fold.

An election day eve open-thread. Have at it.

The polls open in just over 12 hours. What are the tea leaves telling you?

My prediction for NJ-3rd Congressional district is that Adler’s fate boils down to just two towns: Willingboro and Cherry Hill.

What’s cooking in your area?

Who knew?  In addition to Oprah, Newark Mayor Cory Booker is also good friends with Congressman John Adler.  That’s the way it was presented at an Adler rally today in Willingboro. 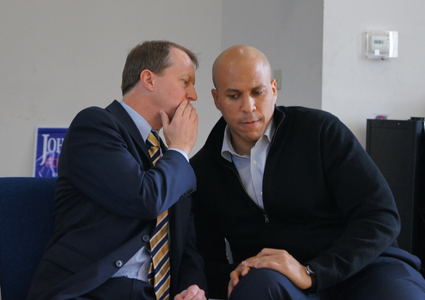 After the introductions, John Adler addressed the crowd of about 150 supporters.  I’ve heard Adler speak many times, and this was by far his best performance.  In the past, he has seemed a bit stiff to me, but today he was on top of his game.  His ten-minute extemporaneous presentation was lively and he delivered a very positive message.  The congressman reminded the crowd that he was there to serve them, not necessarily the party, and that he hoped to have another two years to help the President with his agenda.  (I’m not sure how this is in accord with Adler’s health care position, but this was a “feel good” rally and the audience seemed to buy it.)

The popular Newark mayor was the highlight of the afternoon.  He spoke from the heart, telling the audience about his childhood in North Carolina, the influence that his father had on him, and the need to be partisan during elections, but non-partisan in governing.  My favorite line was about Democrats’ “sedentary agitation” – getting all worked up about Fox “News” and other demagoguery, but not proactively working toward fixing the system.  Booker reminded me of another young politician – John F. Kennedy.  His remarks were passionate and sincere.  But unlike JFK, Booker was not born into wealth and his story was inspiring.  When talking about the election of Governor Christie, he lamented about the low voter turnout in his own Newark election district, and implored the audience not only to vote this year, but to get the message out to their friends and co-workers.

The land that never has been yet-

And yet must be-

The land where everyone is free.

The land that’s mine-