KeystoneXL defeated in the Senate

Update: Yes votes at 59. KeystoneXL is defeated in the Senate.

Update: Voting is now underway. Bob Menendez and Cory Booker have both just voted No.

We promised you earlier when we posted a comment from Sen. Booker that we would post Sen. Bob Menendez’ statement on the Keystone Pipeline. He did write one, and asked reporters to hold it until the vote. Here’s what Menendez said today:

“The rewards of moving forward with Keystone XL simply do not outweigh the risks.  It is a bad idea that could be devastating to the environment and simply does not deliver long-term jobs or benefits for the American consumer.

“Further, the oil pumped through the Keystone pipeline is for export. If all we’re going to do is be a pipeline for Canada to sell its energy globally, I don’t know why in fact that makes sense.  This is just another empty handout to Big Oil with no significant benefit to the American people.

“I firmly believe creating good-paying jobs is a top priority, but the Keystone pipeline is not the answer.  We need to invest in repairing and upgrading America’s aging and crumbling infrastructure and incentive clean energy-policies that will create millions of good jobs for decades to come.” 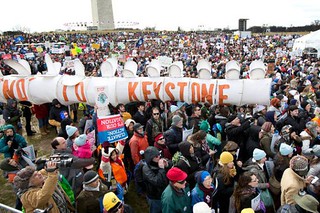 Today is about arm-twisting for Sen. Mary Landrieu, Democrat of Louisiana, as she works to turn the 59 votes she appears to have into the magic number of 60, to send her bill authorizing construction of the Keystone oil pipeline to President Obama’s desk. Won’t be Sen. Angus King of Maine, considered a hot possible for a Yes vote. He’s out of it, as of today. She won’t find a vote a Senate vote in New Jersey, either – despite the fact NJ Republicans and two Democrats voted for it in the House. Both your senators will vote no:

“I’m a staunch advocate for investing in infrastructure that creates good paying American jobs – from roads and bridges to air and sea ports – but not at the cost of the long-term health of our environment. I have serious concerns on the environmental impact of the tar sands and the lack of long-term job creation. My position has been consistent since I became a senator in 2013. I will be voting no.”

Sen. Menendez, via his staff, was a little less-forthcoming with a comment last night. But they were clear that he intends to vote against it, and will likely issue a statement later today to coincide with the vote tonight (which we’ll post). But in Deciminyan’s interview for Blue Jersey last year, which was picked up by The Hill, Menendez told Blue Jersey he has two objections:

(1) the environmental consequences (2) there is no guarantee the tar sand oil that’s created from it will stay in the United States. It’ll go through Louisiana through the Gulf of Mexico and go into an international market so what will that do for us in terms of energy? And the jobs that are created in comparison to the risks as small.

Below – Sires, Norcross and the House vote.

OK, who needs to register to vote?

National Voter Registration Day. Here are links to help you register somebody, or to update your own registration:

NJ Division of Elections – forms for each county, in English & Spanish.

It appears Steve Lonegan believes they are.

Separate, But Not Equal

On September 4 2013, I, Terry Agee, a Senior Political Science major at RU-Newark was informed by RU-New Brunswick by an email that had stated I would would not be awarded financial aid for the 2013-2014 term. Moreover, it had accused me of accumulating too many credits for a Rutgers’ Undergraduate Degree. Well, the notice was grossly incorrect. For the record, I am 23 credits below RU-New Brunswick’s 180 degree credits policy. Nevertheless, I was told to submit an “Academic Plan” from my Academic Adviser for a one-time consideration dealing with this financial matter.

I just posted this on the Steve Lonegan for US Senate FB Page: “The line that your mom did not need SNAP when she was left alone with children is such BS. Did she get life insurance when your dad die? Did your family get SSI? You got support. You were 17. You could get a job and help the family. Your mom did not have to pay for day care. You mom was not in the economy of 2013 where minimum wage does not even pay the rent on a 2 bedroom apartment in any town in this country. I would not be surprised if your mom had medical benefits in the job she got when your dad died from her job yet you want to deny the uninsured any coverage. You are a privileged selfish ,an who has no idea what it means to struggle to work 60-80 hours a week, feed your family and keep a roof over their heads, all the wile, praying that none of you get sick. Get a reality check and meet some real people, not just poor people, but uninsured and underinsured middle class people.”

The DNC certainly is enjoying the candidacy of Steve Lonegan for US Senate.  They put out his email with the headline, “GOP Civil War Erupts in New Jersey……Less Than 48 Hours After Polls Closed” with this shot and chaser:

SHOT: RNC spokeswoman Kirsten Kukowski confirmed that the committee will help Lonegan through its Victory program in New Jersey. The Victory program provides resources to Republicans from the top of the ticket down, such as funding for offices, staff and volunteers to garner support for GOP candidates. [Roll Call, 8/15/2013]

Apparently the DNC is trying to tarnish the whole National Republican Party with the Lonegan Candidacy. According to Buzzfeed:

He calls social security a “Ponzi scheme,” advocates for the “destruction” of Medicare and Medicaid, denounces Spanish-language advertisements as “racial profiling marketing,” and describes Cory Booker, his new opponent in the New Jersey senate election, a “socialist” who just “can’t wait to pull the race card.”

His name is Steve Lonegan, and Democrats in Washington really want you to meet him.

Five minutes after Lonegan topped the polls in the primary Tuesday night, reporters’ inboxes lit up with a memo and video from American Bridge 21st Century: “The new face of the ‘rebranded’ GOP.”

What do you make of the DNC’s effort to use Lonegan as the face for the rebranded GOP?

Write In Booker To Send a Message

For progressives there are a lot of reasons to be wary of Newark Mayor Cory Booker as our next US Senator, no the least of which are his closeness to Wall Street and corporate interests and his backing of educational “reform” that has been demonstrated as no more effective than existing public education while damaging public education.

For some progressives — find some on our Facebook page — these issues raise enough concerns that voting for Booker is problematic.  Some even say they will sit out the election or vote for a third party candidate that can’t win rather than cast a ballot for Booker.  For these folks Booker’s long advocay for marriage equality, civil rights, environmental regulations, participation in Obamacare and guaranteed vote for Democratic court nominees are overshadowed by his conservative economic stances.

Frankly, I don’t see the point.  One of the things I like best about progressives is we like to accomplish things.  Even our protests for things we are sure to lose are supposed to move the discussion forward.  We like to make things happen.  And sitting out doesn’t do that.

So I racked my brain and came up with an idea we can do together to make the point that we are willing to vote for Booker, but would prefer candidates who are progressive not only on social issues, but also on economic issues.  And we want Booker to come to our side on those economic issues.

In this way we get to have our protest vote but still guarantee the regressive Lonegan will not win.

And Booker has to run again in 12 months for the full Senate term, against a much tougher candidate than Lonegan.  In 2014 he will need progressives to be his margin.  If we can get three, four or five percent or more of Booker’s votes to be write-ins this year it will send a message that we’re holding our noses this time, but next year may not bother if he doesn’t come around and stand with us on the issues that are important to us.

Interestingly, it’s thanks to Chris Christie’s megalomania that we may be able to pull this stunt off.  Yesterday only 10% of the voting public turned out to vote, and in the October general turnout will be similarly low.  With such minimal participation we can send the message that we want more and better Democrats.

We all have to agree to work together on this, to promote the idea in e-mails, on Blue Jersey, on Facebook, to our friends.  We need to partner with other progressive organizations who can help spread the word, and even with Democratic party organs who backed Rush Holt and Frank Pallone as progressive alternatives.

This publicity is necessary not just to get our numbers up so they’re noticeable, but also to ensure the party and Booker campaign hear us and know what we’re doing.

So, will you join us?  Will you, whether you like or dislike Booker, write him in instead of voting on the party line this year?

Tell us in the comments.

Now that Cory Booker is the Democratic nominee for U.S. Senate, what’s a Progressive to do?

Certainly, we don’t want to see Steve Lonegan added to the list of batshit crazy senators like Ted Cruz who besmirch American values of liberty and justice for all. But Booker will win his Senate run without the votes of Progressives.

Booker represents everything that is wrong with the Democratic Party and politics in general. While he’s on the right side of social issues, he’s in sync with the Wall Street bankers who tanked our economy and with the education profiteers. He’ll be a reliable vote in the Senate on issues like gay rights, but we’ll see more of the same when it comes to coddling the rich.

So what should I do on Election Day? I’ve always been a proponent of voting – even if I’m voting for “the lesser of two evils.” But a vote for Booker is a vote for the status quo of the Democratic Party. If I sit out the election, I do have the satisfaction of not supporting that status quo. And if Lonegan pulls off an upset this oddball election, there’s always hope that the Democrats will wake up and nominate a true Progressive to occupy Frank Lautenberg’s seat in the 2014 election.

Adam Green is the co-founder of Progressive Change Campaign Committee, a Somerset/Edison native, and a friend of Blue Jersey. Promoted by Rosi.

On the merits, Rush Holt deserves to be a U.S. Senator.

But today’s Senate race won’t be decided on the merits. It will be decided by who has the highest name recognition on a sleepy summer Election Day. We all know who that is, and that’s why the PCCC did not get actively involved in this election.

Here’s why your vote matters anyway.

Rush Holt used his campaign to expand the debate and really educate the public.

His awesome videos about about why we should tax Wall Street speculators and pass Elizabeth Warren’s student loan plan will be forwarded around for years to come — and impact future debates.

This is in stark contrast to those who say nothing real in their campaigns.

Rush Holt deserves to be rewarded for thinking big. We need him to keep doing that in Congress, where he will continue to serve.

So, please vote today and show Rush that you support his big ideas.