NJPP’s analysis finds that not only is the U.S. Senate’s version of the Republican efforts to dismantle the ACA a disaster in terms of the sheer number of uninsured it would leave here, but the impact of cuts to Medicaid…
Read more

Here’s the latest in our 7-week budget series, on what NJ’s spending priorities should be – Rethink the 2016 NJ Budget, with the Anti-Poverty Network. Ray is Senior Policy Analyst for New Jersey Policy Perspective – Rosi. 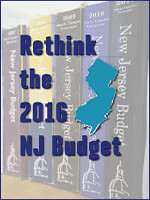 The state budget proposal for the coming year contains precious few increases to respond to the continued increases in poverty faced by New Jersey’s most vulnerable residents. One apparent exception to this trend is the 11 percent increase in funding for the Department of Human Services (DHS), the department of the executive branch that oversees most of the social service programs that funded by or through the State –

programs for healthcare, mental health, and disability services, as well as the income assistance programs and supplemental nutrition assistance that serve the poorest of the poor.

But don’t be fooled: This increase is not so much the result of more state investment, but the increasing reliance on federal dollars to meet New Jersey’s needs. In other words, The money that comes through DHS has increased, but the state itself has not increased its budget commitment to meet the growing need. In fact, the increased federal dollars are not even going as far as they could, because some of those resources have been diverted to plug other spending gaps.

Here are the numbers: