Stop Chris Christie from selling the New Jersey Lottery! It makes money for the state and its citizens in need and employs 7000 people in New Jersey!

How many more jobs can New Jersey afford to lose?

This is more a case of multiple issues.

1) Obama has NEVER been a good platform debater. He usually comes off dry and “professorial”, so that was nothing new. And the right’s base has always viewed advanced education as being “elitist” when it comes to Obama. It almost feels like a left-handed racial rebuke. Like a black-man with an education is trying too hard or pretending to be something he’s not. This is not to imply that all on the right feel this but there are enough that it gave the “Elitist” taint traction.

2) Obama has a full time job as PRESIDENT that keeps him pretty occupied. The morning briefings he gets 7 days a week aren’t exactly “brief”. They typically come in a binder of 30 to 50 pages, in synopsis. That’s like having school every day and having to answer the quiz that afternoon.

3) The Romney we’ve seen for the last 3 or 4 months wasn’t the Romney that showed up. This “Denver Romney” was more akin to the Liar character (Jon Lovitz) from Saturday Night Live so Obama had one set of debate points and Romney invented a whole list of fantasy points with no basis in reality. Even going so far as denying months of printed, spoken and web-present positions HE took during the primaries and up to the day before Denver (His people spent the next day rolling back half a dozen statements like “I won’t kill the pre-existing conditions rule in Obamacare”). This was designed specifically for the purpose of throwing Obama’s responses out the window.

4) Maybe altitude adjustment had him off a bit it wasn’t just that and definitely not “mostly” that.

The truth is Romney’s people KNOW he’s got a “flip-flopper” veneer and they’re used to having to roll his crap back. It’s gotten so expected it has become background noise. This was a calculated plan to make President Obama look weak, unprepared, off his game, whatever. In the end, almost everything Romney said was shown as lies, inaccuracies and bullet-points with no possible basis in real economics but to the red-meat-right, it doesn’t matter. They will back him regardless because he is all they have. Between the rabid Tea-Party and the death of the moderate Republican, they could put up an animatronic puppet from Disney and they’d back it.

Obama suffers from one major flaw for many of us on the liberal left; he’s too polite. When Romney lied, he should have said “That, Sir, is a bald-faced lie and you know it”. Instead President Obama stood back for fear or apprehension in being labeled the “Angry Black Man” or that “Uppity N-word” because we all know that there is a huge breath being held on the extreme right in the hope that he does get angry they CAN use that label. We are not a post-racial society, as incidents daily show.

Obama has a bigger mountain to climb for a hundred reasons and he has to climb it carrying the weight of a struggling economy the Republican party had an eight year hand in creating and has spent the last 46 months trying to keep under water so they would have a platform for this election. Mitch McConnell made that much clear and John Boehner has strived to enforce the plan of forced stagnation through congressional malfeasance.

Did Obama take it on the chin in the debate? Yes. Was it fatal? Hardly. Does it make his campaign a little harder? Sure. But in the end, Romney gave the Obama reelection campaign enough advertising material to last a lifetime.

Romney’s Superior Sense of Self

The Champagne and Disdain Campaign

War on the Poor and Middle Class

Be aware that we are under attack and we must use our votes to fight back!

Let us not forget who we can’t rely on to have our best interests in mind.

Now that Chris Christie has made it clear (for the seventh or eighth time) that he has no interest in running for President because his job as “New Jersey Super Dude” isn’t done yet, it would be safe to assume he’d get back to focusing on finishing his napalm attack on New Jersey’s middle class and working poor public workers, right? Don’t count on it.

Christie created for himself a unique position to do the one thing that drives him most; feed his ego. If we have learned anything at all over the last 2 years it is that Chris Christie loves attention. Good attention, bad attention, any attention he can find and the GOP disillusioned are more than happy to give it to him. Why not? Their current slate of accepting presidential hopefuls are having a hard time garnering any significant support from their base at all and there is no one in the wings promising any better.

The redeveloped Christie effect is a myth that he created after his gubernatorial election to endear himself to and provide red-meat excitement for the newly empowered Tea Party movement. He perceived they would be a power in the 2012/13 cycle and felt he needed that option wide open. Now the Tea Party is looking more like the guys stalking the hunting party in the movie “Deliverance” and he is looking for a way to now disconnect or at least distance himself from them.

Overall, his real intent has been to distract discerning eyes from his real goal of corporatizing the state and hacking off as many bits and pieces as rewards for his big money supporters in privatization schemes. His platform of hate, attack and insults was designed to distract a misinformed base and apathetic opposition. His scheme has excited the GOP king makers who desperately need a superstar to compensate for an ideology that is suffering the effects of the voting public waking up from a long and apathetic stupor and a current slate of GOP hopefuls who look more like the hopeless. They saw in Christie, not really a savior, but a showman. Another version of an actor they could hire to play a role they needed to fill in order to maintain their manufactured movement of faux austerity. They needed a character to gin up the base and distract them from the ever increasing reality that their platform is designed to leave the poor middle class behind and feed the top earners more of the ever-shrinking American Dream. The problem being that their cobbled together Frankenstein Tea Party movement as it sits today is loaded with more and more middle class folks slipping into poverty who are starting to realize that the GOP really doesn’t care about them. Once they set aside making racist posters and regurgitating uneducated accusations of fascism against Obama, they started to understand that the GOP didn’t care about them either.

Some would ask why, with so much clamoring and begging for his salvation of the party, he would demure. The answer really is very simple. In regards to his career, Christie doesn’t play to lose. He does nothing and takes no chance that isn’t a sure win. If he feels the slightest doubt, he avoids the situation or manipulates the game to win. He’ll lie, cheat and abuse his powers of office faster than Nixon claimed that he wasn’t a crook or Reagan said “I can’t remember”. In a presidential campaign, the spot light is too bright for cheating and manipulation and he knows he doesn’t have a prayer against Obama so he instead chooses to finish “Saving New Jersey”. Don’t expect him to accept a VP nomination either. He knows that the republicans don’t have any real hope of winning the upcoming election and he won’t be caught dead on a losing team. It doesn’t serve his ego.

Christie is holding out until 2016 and hoping that the GOP holds the house and keeps the senate ineffective, hamstringing any chance of Obama getting any real recovery going because only then will he feel confident enough to take the shot. Once Obama has finished his second term, the hope in Camp-Christie is that the disappointment with Democratic failure will be so thick that they could put up a carnival barker and win in 2016. The next 5 years, if Obama and the Dems can’t get the house back and an unbeatable majority in the senate, is going to be a never-ending litany of filibusters, distractions and distortions in order to make Obama as ineffective as possible and the condition of the nation be damned. We have had a solid three year preview of what the next five will look like of the GOP maintains enough power to cripple this presidency and Christie is counting on it.

You may ask, what does all this have to do with Christie  working on New Jersey’s issues. Essentially everything. Christie will likely spend a lot of time on the road backing the safest candidate on the GOP roster in order to keep himself in the national spot light. Christie will give some cursory attention to matters in New Jersey in order to prop up his “Tough as nails” persona but his real energy will be in keeping his face in front of every nationally broadcast news camera he can. It feeds his ego, his plan and his delusions of grandeur.

Get ready to watch the Christie Effect go full force while New Jersey continues to slip into an abyss of failure, unemployment, disenfranchisement and give Texas a run for that race to the bottom.

Our reader, Couch Potato Politics, thinks Star-Ledger is taking Christie spin at face value and missing the real story of what’s happening to New Jerseyans. What do you think, Blue Jersey? – promoted by Rosi

A lot can be said of Chris Christie and his campaign of destruction at the expense of the middle class public sector but the one thing that can’t be said is that it’s beneficial. Well, unless you’re a spinmeister who considers truth just an inconvenient nuisance better left unsaid. It looks like the Star Ledger is taking a direct feed from the State House in Trenton.

Anyone Know How To Get A Rally Started?

“If American workers are being denied their right to organize and collectively bargain when I’m in the White House, I will put on a comfortable pair of shoes myself, I will walk on that picket line with you as President of the United States of America. Because workers deserve to know that somebody is standing in their corner.” Sen. Barack Obama – Presidential Campaign Speech in 2007 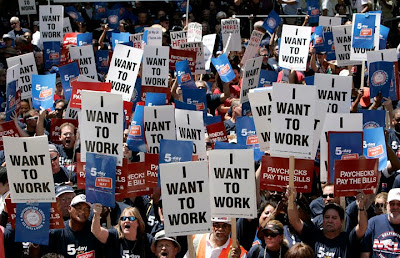 The last two years have seen some of the most egregious and draconian attacks on public unions and middle class families in the last 30 years and President Obama has remained mostly silent and conspicuously detached from all of it.