Yesterday’s Star Ledger editorial page is a case study in the double standards it applies to organized labor. On the one hand, they make an impassioned and completely justified plea in support of the unsustainable wages earned by SEIU 32BJ’s 7,000 custodians and janitors who are fighting for a $15 minimum wage; while on the other, they excoriate Sen. Sweeney for pushing for a constitutional amendment to fund NJ’s anemic pension system, and as usual, beat the war drums for public employees to pay more for less.

But this is nothing new. The S-L editorial board, led by Tom Moran, has a long history of union bashing—especially teachers. Just search this blog or Jersey Jazzman’s for a list of Moran’s rants. Who knows why he hates us and loves others. And now that Sen. Sweeney has proposed the amendment that would require quarterly pension payments, Moran is at it again, spinning his ill-informed, teacher-hating rhetoric to unsuspecting readers:

But public workers continue to receive health benefits that are far more generous than those enjoyed by the typical taxpayers. The cost is about 50 percent more than the average plan in the private sector, according to Tom Byrne, a former Democratic state chairman and member of the governor’s bipartisan reform commission.

First, I beg to differ on those generous benefits. The days of ‘Cadillac’ benefits are long gone thanks to Chr. 78 (more on this below). Second, does anyone else see the subtle fracturing here? The blaming and shaming of middle class workers? The pitting of public vs. private sector? The brainwashing of the general public that the financial crisis would go away if only we could get rid of those pesky, greedy unions?

Those in power, including Moran, have done an admirable job of convincing private sector, middle class workers into thinking that labor is the problem, when instead, labor is the solution. If more middle and working class people belonged to unions, wages, benefits, workplace safety and morale would be up, and so would the economy (more on this below). The middle class was built on labor, and the glory days of the middle class in the mid 20th Century are a perfect example.

But Gov. Christie and other anti-union leaders, corporate heads and the newspapers they control have done an admirable job of convincing the general public that labor is the problem. The message goes something like this:

We are the job creators. We can’t sacrifice anything because we provide you with your ever increasing workloads and ever decreasing salaries and benefits job, and you should be grateful. After all, times are tough, and we all have to “share the sacrifice”. (Notice how you never hear that phrase anymore. Could it be because the only people who were sacrificing realized they were also the ones getting screwed?)

We’re sorry we have to screw you cut your compensation, ship jobs overseas and lay off employees, but those greedy unions have negotiated contracts just want more and more, and we would have to take less in salaries and bonuses can’t afford that. So, we’re hoping that if we cut your compensation enough you will speak out against their greed and selfishness so no one notices that new yacht we just purchased because they are destroying NJ.

Now, about those benefits: if they are so ‘generous’, then why did NJ Spotlight report this last year? 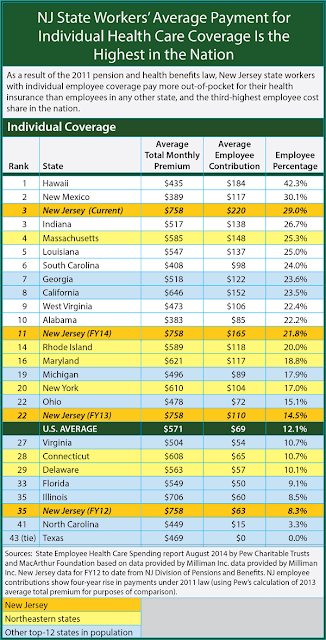 In fact, the average New Jersey government employee is paying more for individual health insurance coverage than government workers in any other state and the 10th-highest average premium for family coverage in the country.Further, state and local government workers are paying a much higher percentage of the cost of their individual health insurance policies than private-sector employees in New Jersey have been paying, and not much less than the percentage paid by the state’s private-sector workers for family coverage.

The health benefit payment schedule set by Senate President Stephen Sweeney (D-Gloucester) as part of the controversial 2011 pension and health benefits overhaul established a complex premium-sharing formula based on “ability to pay” that is the most progressive in the nation — one that ranges from a low of 3 percent of premium cost for those earning under $25,000 to a high of 35 percent of premium for those making over $110,000 for family coverage.

“Public employees are paying more for their health insurance in New Jersey than in most other states, but we made sure that the premium schedule is based on ability to pay. That’s important going forward,” Sweeney said in a comment aimed squarely at Christie’s pension and health benefits panel. (all emphasis mine)

And don’t think for one minute that we’re paying more because we’re getting more. Far from it. Labor has had to give back a lot over the past 5 years. Co-pays, premiums and deductibles are up, and services are down. I can put you in touch with many public employees who are in the same boat as private sector workers—paying more and getting less. Sinking all ships instead of raising all boats makes everyone drown.

The problem with Sweeney’s amendment is that he answers the key demand of the unions – to fully fund the pensions – without asking for cuts in health spending in return.

Why should public employees—and all middle and working class families for that matter—have to sacrifice to the point of unsustainable living while America’s 1% is making more now than at any other time since the Great Depression? Why isn’t anyone questioning the near loan shark tactics of health insurance companies that jack up premiums by double digits seemingly overnight? Why has this country not yet moved to a true universal healthcare system so that everyone has access to quality, affordable healthcare? (Yea, I know… I know… that’s a convo for another day) How much more can public employees—and all workers for that matter—sacrifice and still pay our bills? How much more can we be forced to give back while Gov. Christie gives billions in tax cuts to corporations? How much more can we do without before it becomes impossible for us to do our jobs? Why should public employees, the majority of whom have seen a net decrease in take home pay, give back one more penny while Christie refuses to keep his end of the deal, opting instead to give his Wall St. buddies/GOP donors huge bonuses for their lackluster returns on our deferred compensation?

None of this is the fault of public employees, who built the middle class, yet we are blamed by people like Moran who have a hidden agenda and either don’t know or are in denial about all the facts.

But this hypocrisy is nothing new. In Jersey Jazzman’s latest he reminds us of the S-Ls bizarre-o endorsement—and later retraction— of Christie for governor in 2013, and eviscerates Moran for criticizing The New Hampshire Union Leader for its recent endorsement of Christie:

Tom Moran ignored Chris Christie’s many, many failings and endorsed him for reelection as governor for one reason: Christie was willing to go to war with the New Jersey Education Association. In Moran’s bizarre world, Christie’s jihad against the teachers union was more important than solving the pension problem, or adequately managing Sandy relief, or keeping the state’s credit rating up.

Tom Moran is the most shameless type of hypocrite imaginable. He looks down his nose at another newspaper for ignoring the facts about Chris Christie — the same facts Moran ignored just so he could stick it to teachers and their union.

Look, as a registered Democrat and proud union member, I was incensed when Sweeney and other Trenton Democrats sold us down the river on the Pen-Ben deal. They turned their backs on the core values of our party and those for whom they are supposed to fight. But, I’m not going to sit here and rehash that, especially when the clock is ticking on the pension fund time bomb (see my countdown clock at the top of this page). The fact is that Sweeney is taking steps today to fix this mess by ensuring that the state finally does what it promised. Are there political aspirations tied to it? Probably. But, it’s a helluva lot more than Christie ever had any intentions of doing.

With corporate money now controlling virtually every aspect of American life, it’s only natural for the news media to spin tales of union greed as the downfall of civilization, when in fact, that downfall is being caused by corporate greed. Robert Reich’s documentary film, Inequality for All lays it all out in devastatingly simple language and stresses the importance of organized labor as a key to building a strong middle class. Here’s the trailer:

Everyone should watch this film.

Public employees are not the cause of this financial crisis. Instead of sinking all ships, Trenton should be trying to lift all boats—both public and private. If unions die, so does the middle class. We are the last vestiges of a workforce that can stand up to corporate greed, and fight for fair wages, benefits and working conditions—for everyone—because as go the unions, so goes the middle class. But private sector workers have been turned against us by the likes of Moran and the S-L editorial board who spew hateful and derisive rhetoric.

Millionaires are not fleeing NJ in droves. On the contrary, they are the only ones who can really afford to live here comfortably. NJ is home to over 600,000 public employees who contribute to local, county and state economies every day. But, unless the pension system is fixed—without any more public employee sacrifice—many middle class people will be forced to leave because we are the ones who can’t afford it. But that’s an inconvenient truth Moran is all too happy to avoid.